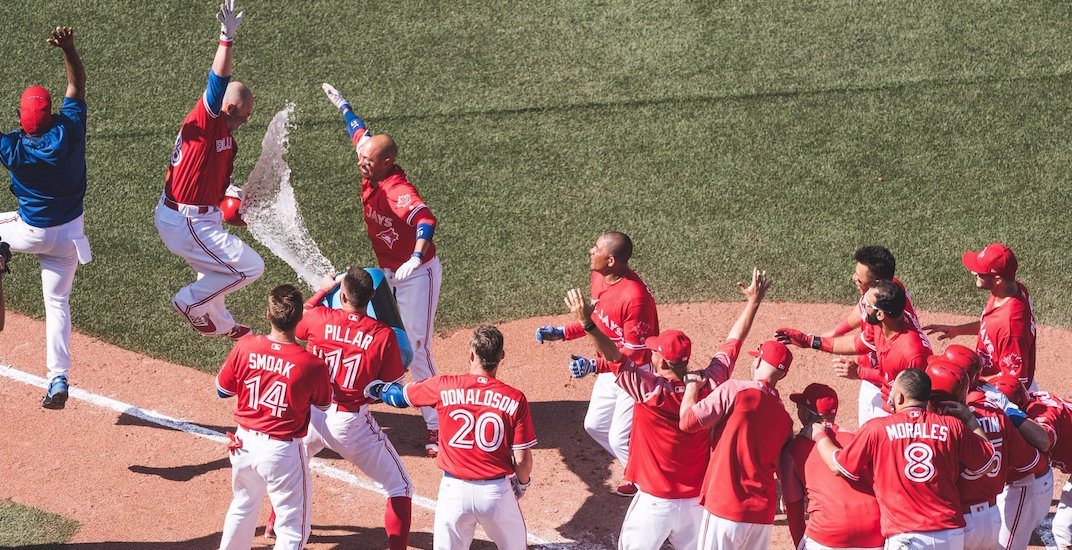 Are you kidding me?!

Prior to this week, the Toronto Blue Jays had won a game with a walk-off grand slam just twice in their history. And now, Steve Pearce has done it for the blue birds twice.

Pearce hit a grand slam in the bottom of the 10th inning against Oakland on Thursday, and somehow he managed to hit a more dramatic home run against the LA Angels on Sunday.

On Canada Baseball Day, Pearce capped off one of the most amazing comebacks you’ll ever see.

Trailing 10-4 heading into the bottom of the ninth inning on Canada Baseball Day, the Blue Jays looked dead and buried. Many fans had already left Rogers Centre, and who could blame them?

They’ll probably blame themselves when they see how the game ended.

A two-run home run from Kevin Pillar narrowed the score to 10-6, before Canadian Russell Martin singled home another run.

After Kendrys Morales walked to load the bases, Steve Pearce was given the opportunity to be a hero once again. He didn’t disappoint.

Pearce hammered a pitch to left field, earning his second walk-off grand slam in four days. It gave the Blue Jays an improbable victory, and the largest comeback win in franchise history after eight innings.

Making the grand slam extra special was that unlike Thursday’s theatrics, the Blue Jays needed all four runs from Pearce this time.