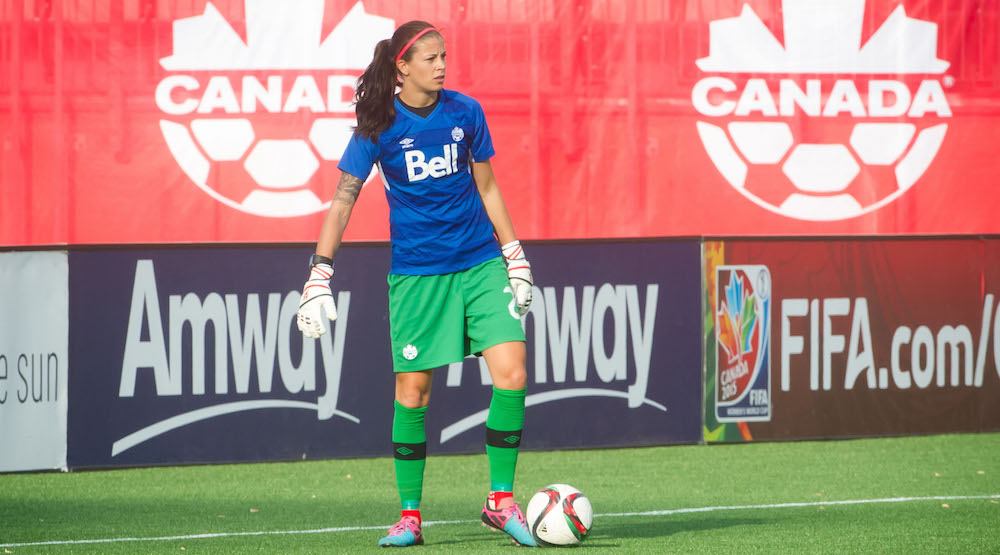 How many times a day do you think about the Olympics Stephanie Labbe? “A lot,” the well-spoken Canadian keeper says.

“It’s a dream as a child to be able to go to the Olympics and be an Olympian so I’m extremely excited about that.”

When the Canadian national women’s soccer team takes to the pitch in Brazil at the Summer Olympics next month, they’ll be doing so without one of their leaders for the past decade.

There’s only one net to defend and it’s belonged to Erin McLeod for Labbe’s entire career. A good keeper in her own right, Labbe has never seen action in a World Cup or Olympics because of that. In 2012, she was also behind the now retired Karina LeBlanc, and wasn’t on the roster.

This year is different, with McLeod having to back out of the Games in April after suffering an ACL tear and having to undergo knee surgery.

No player wants to see a teammate get injured, but Labbe, the 29-year-old national team veteran, has been waiting for her opportunity for a long time.

“I’ve been working my entire career for this moment,” Labbe told Daily Hive at the team’s final media op in Burnaby before heading to France for a pair of friendlies. “I’ve been working every day and that’s what I need to continue to do. Just every day, take it day-by-day and try not to think of it as this ‘big Olympic Games’, but it’s just a couple of games that I’m able to show myself in and prove myself on the world stage.”

Conversely, the injury was heartbreaking for McLeod, who at age 33 might never play in another Olympic Games. Labbe tells the story of how McLeod spoke to the team, to offer some wisdom.

Labbe has only ever played in one World Cup qualifier, in 2010 against lowly Guyana. She started against another easy opponent, Guatemala, in an Olympic qualifier in February. Canada won those two games by a combined score of 18-0, so not exactly pressure-packed stuff.

But the pressure is on now.

Labbe will have to draw on other experiences to help her in Rio. She started the final of the Olympic qualifying tournament against world power USA in earlier this year, although both teams had already punched their ticket to Rio by that point.

She was Canada’s goalkeeper at the Pan Am Games last year in Toronto, which offered something extra given that Canada was the host country.

“Having it at home in Canada added different pressures and more scrutiny with that, so for sure a good opportunity for me to put myself out there and play on the world stage. This is a different beast, for sure.”

Nothing is bigger than the Olympic Games for an athlete, and perhaps no player on the pitch is under more pressure than a goalkeeper.

The Olympic tournament sets up to be a difficult one for Canada, who will have a tough matchup against #5 ranked Australia right away.

“We’ve got to come out and get a result against Australia. It’s going to be an incredibly intense opening game, but we’re confident going into it and we know that we have what we need to get a result.”

After that is an easy matchup against Zimbabwe before facing world power Germany – a country Canada has never beaten – to round out the group stage. The top two teams will advance, with two third-place teams from the three groups advancing as well.