Stationary: A Recession-Era Musical is the millennial anthem that our generation both needs and deserves. Much as I hate that word – millennial – for once, it’s not used as a pejorative here.

With so much indie theatre going on in this city, it’s sometimes hard to know what to put your money on. That well-marketed hipstery show might turn out to be less than promised, while you missed a true theatre gem because the buzz came too late. Stationary then, is the happy collision of great word-of-mouth marketing and great work. The only thing that may throw a bend into your indie-fuelled plans is how quickly tickets are going.

Stationary: A Recession-Era Musical is an indie-rock musical about the moment when big dreams meet reality checks. Six young employees of a floundering advertising company struggle under the fluorescent lights of real life, where obligations and social niceties loom large. But in the world of daydreams, all things are possible. 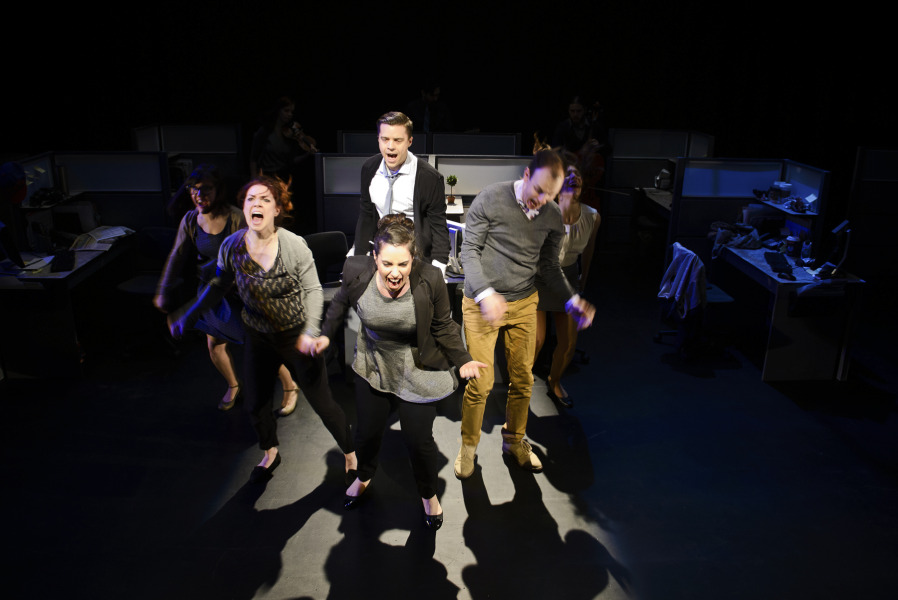 Delinquent Theatre’s musical darling is back for a scant two-week run at The Cultch, after a successful debut at Neanderthal Arts Festival (now rEvolver) in 2012, and has since toured to North Vancouver, Gabriola Island, and Ontario. The little indie-rock musical that could keeps on popping up all over the place, probably in no small part due to the tenacity of its young and talented creative team. Because that’s the dream, right? Work hard now, get rewarded later?

And possibly save up for a down payment?
Or finally score that promotion at work?
In order to afford all of those sushi binges and ubiquitous yoga pants?

Stationary is that well-written retort you always had in mind when those articles on self-entitled millennials come out. One outlet smells blood in the water, and then soon it seems like a widespread feeding frenzy. Rare does such a thought-out, well-articulated response float to the top, voiced by the actual people who are struggling day in and day out, with little hope for getting ahead. This is our side of the story, and a bunch of young, up-and-coming artists may just be the best choice to embody the challenges of our otherwise decentralized generation. 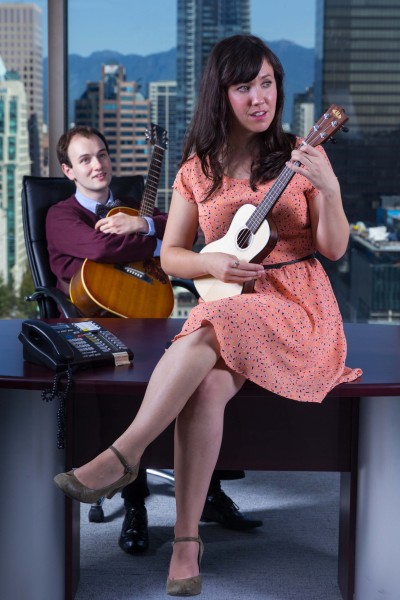 Performance-wise, the majority of the songs are witty and point out certain frustrations that pop up within daily office life. “Little Spoon” is easily the best song early on, with sweet harmonies between Artistic Producer Christine Quintana’s “admin-style” receptionist and politically-correct new guy (Anton Lipovetsky). It also has the most hilarious scenario and crafty use of everyday office objects. Feelings of alienation, boredom, helplessness and rage are all touched on in equally entertaining fashion, and the snappy production wraps up in 90 minutes – well aware that the mostly youngish crowd will probably need do the same routine in real life, the very next morning. 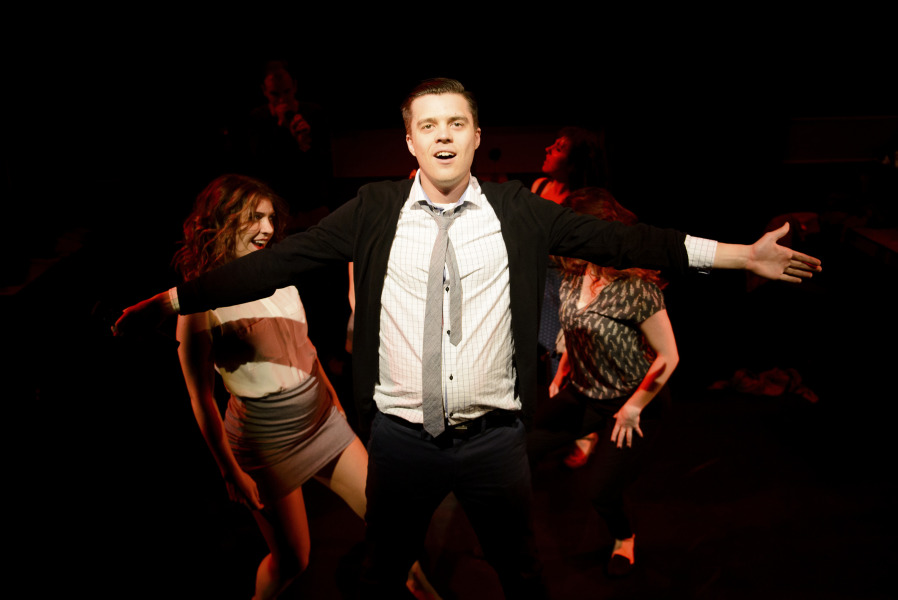 What could be better? Mics will balance out the harmonies and clarify the lyrics – some of which were harder to hear, depending on the performer. Quintana easily has the best voice and carries many of the group ensembles; Brian Cochrane is wonderfully clean in the recorded soundtrack (available for purchase on Bandcamp), but the raps sound less put-together live. All of the performers give it their all, and their enthusiasm and heart easily makes up for slight imperfections of pitch and choreography.

This show has the potential and novelty to go ‘all the way,’ and I’d love to see a more polished version; some tinkering of the lyrics and musical arrangement to really make things click. But really, as much as I wish for Stationary to succeed and hit it big time and in turn resolving some of the anxieties of its creators, there’s also a part of me that yearns for this play to stay homegrown and integral to the Vancouver scene.

I haven’t made up my mind on where Stationary fits in our landscape; but I do know that you should run, not walk, to one of the most entertaining nights in Vancouver.

Stationary: A Recession-Era Musical runs at The Cultch until May 2. More information here.