Things are about to change at Starbucks, specifically for those who collect the coveted stars as part of their customer loyalty rewards program.

Starbucks revealed Monday that the program formerly known as “My Starbucks Rewards” would be re-named simply “Starbucks Rewards,” and that stars would be awarded based on dollar value. While now, customers have been granted a star per transaction, regardless of the spend, come April, the plan hands out two stars for every dollar spent. 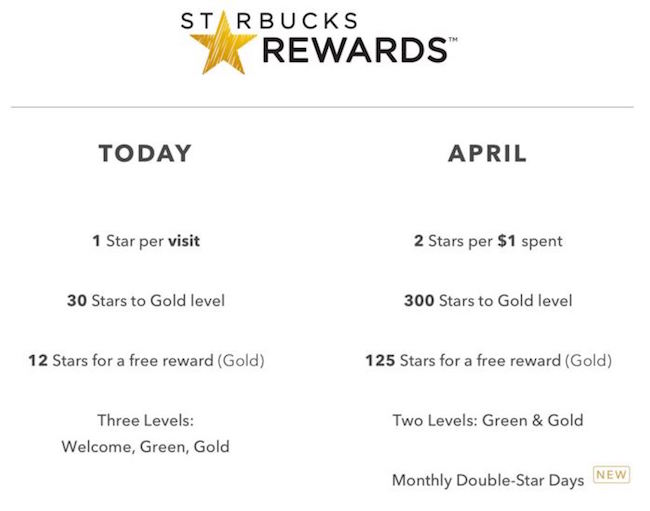 Customers who tend to spend $5 a pop on the premium espresso-based drinks (your grande Caramel Macchiato, your venti no-whip White Mocha, and so on) should have reason to cheer, and you’ll stay on track to reap the programs rewards, like free drinks.

While on the surface it doesn’t sound like a big change–and, in fact, it almost sounds advantageous–Starbucks essentially moved the goal posts way back, meaning it’s going to take more spending to get more freebies. That “reward” you got for 12 stars (12 visits) now will cost 125 stars. So you’ll be spending $62.50 to get there.

A little more math to help illustrate: $62.50 divided by 12 is $5.20. That means that unless you spend at least $6 a visit, it will take you exponentially longer to earn a reward. Customers who enjoy a simple brewed cup of coffee will be making three times as many visits in order to earn the rewards their friends who drink oversized sugary speciality drinks (or who add-on a slice of banana bread or a breakfast sandwich to their order). It all comes down to dollars, which, to play devil’s advocate, makes it fair across the board; now what you’re spending more of is time.

The amusing part of this change-up is that Starbucks says we asked for it. According to their media materials, rewards based on actual spend is “the #1 customer request,” on the My Starbucks Idea website. So it’s our fault, guys.

The Twitterverse is pretty peeved, with people imploring the ‘bux “do the math” and calling the new plan “atrocious,” as well as letting the global coffee chain know they’re never coming back again.

Starbucks will roll out the new Stars program in April. Get all the details here.