Starbucks has just made ordering and paying for a Grande Caramel Macchiato with whip even more convenient, thanks to their new Mobile Order & Pay App.

Launching on January 19, the feature will be available at over 130 store locations in Vancouver, West Vancouver, Burnaby, Richmond, New Westminster, Gibsons, and Sechelt.

Toronto was the first Canadian city to receive this innovative piece of technology, in October 2015. While Torontonians have been experiencing the joys of pre-purchasing Starbucks orders via a mobile device, it launched with the iOs feature only. Vancouver will launch the app for both iOs and Android. 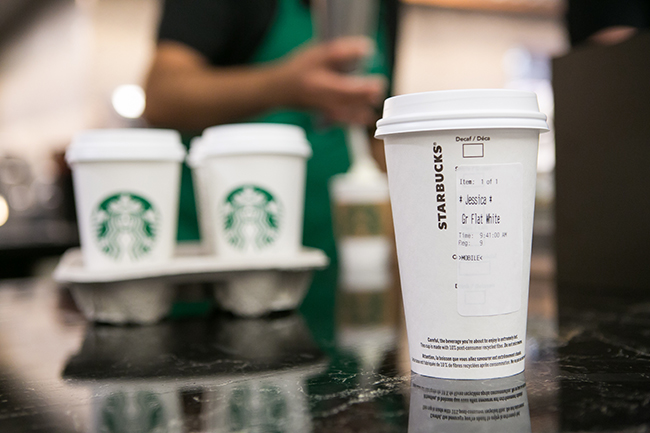 While customers with smart phones have been able to make cashless mobile payments since 2010, this will be the first time Starbucks devotees in Vancouver will be able to order and pay ahead of time.

It’s a “natural continuation,” Jessica Mills, director Brand and Digital, Starbucks Canada told Vancity Buzz. At present, around 20 per cent of the customer base that frequent the café’s pay with a mobile device. “That’s one in five people,” remarks Mills.

With the Mobile Order & Pay feature, customers will gain the ability to customize orders in-app, with the speed of placing and paying for an order in advance.

Those with little time or who are simply too impatient to wait in line can make an order from home, on the SkyTrain, or even as they strut their stuff to a storefront. Coffee interns will be particularly impressed with this new feature. Forget gathering everyone’s finicky coffee requests (tall non-fat no-whip extra-shot extra-hot vanilla latte with soy milk) and waiting for them to be made in-store. Those days are gone.

Another cool feature of the app–an estimated pick-up time, which is shown in-app before a customer confirms their order.

While convenience is what makes this app attractive, it’s not the only thing. Being able to fully customize and personalize ones beverage choice, also means that order accuracy will improve. Not only will this effect the beverage and food preferences being placed (no longer will you have to verbally rattle out your well-rehearsed order), but also the spellings of people’s names, which we all know can be hilariously misspelt at times.

Allowing people to select their drink and food choices via an app, Starbucks’ new ordering system has received positive feedback from the hearing impaired community, with comments reflecting a new found confidence in ordering practices. “Technology is not just about speeding up your day, it’s also about enhancing your experience,” declares Mills.