On Friday December 4 at 7:30 p.m. the Force Awakens as the Vancouver Giants will take to the ice in Star Wars Storm Trooper uniforms for an epic battle with the Kootenay Ice.

The Vancouver Giants are two months into their 2015/16 season. With the BMO CHL/NHL Top Prospects game on the horizon for the club this year, star players like #17 Tyler Benson and #7 Ty Ronning are stepping up their game in preparation for the best-on-best showcase arriving at their front door. The Top Prospects Game will take place at the Pacific Coliseum on Thursday, January 28.

The force will be strong for Star Wars Night, and your Vancouver Giants will fight it out dressed as Storm Troopers against the rebellion, the Kootenay Ice. Will Darth Vader make an appearance to keep the rebel force in line? You will have to be there on Friday December 4 to find out. 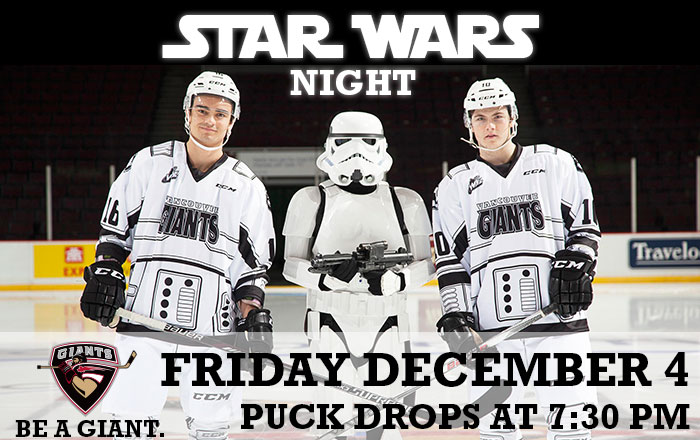 Dinner and the game, for you and seven friends. The prize includes eight gold tickets, eight Giants baseball caps, and eight vouchers for dinner at White Spot before the game (total value $480).

Contest entries will be accepted from time and date of publishing until 11:59 p.m. PST on December 2, 2015. One winner will be chosen at random and contacted through the platform they enter by.