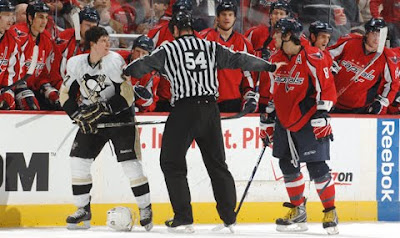 Our new sports writer, Thumbs, unable to access his computer, has sent us the following analysis of the Stanley Cup playoffs:

Canucks car flags are popping up all over the Lower Mainland, the official sign that the NHL playoff season is here. The great thing about having your city in the playoffs (sorry Calgary) is that everyone has an opinion on how the playoffs are going to shake down. Well, your friends here at the Buzz are going to give you our FREE first round prediction. Remember all picks come with a money back guarantee.
Washington is the Vegas odds–on favourite to win the Stanley Cup. Those guys in Vegas aren’t usually too far off. Washington has three prolific scorers in Ovechkin, Semin and Backstrom. They also made some key deadline deals to acquire some gritty depth players in Walker and Belanger. They even have some Vancouver flavour in long–time Canuck Brendan Morrison and former Vancouver Thunderbird Shane Morrisonn. In my eyes, Montreal is too small up front, and too slow on defence (can Hal Gill lift his legs anymore?) to have any chance in this series.

The pick: Washington in 3 (game 4 will be forfeited)

Let’s face it, Martin Brodeur is no longer the four–time Vezina trophy winner he used to be. But, he isn’t Brian Boucher. Boucher holds the record for most shutouts in a row (5), but that was 6 years ago. The fact is Boucher wouldn’t even be in the league if two goalies ahead of him on the depth chart didn’t get injured, and if the Flyers knew how to manage the salary cap. Fun fact; The Flyers have beat the Devils 5 out of 6 times this season.

The pick: New Jersey in 7

Boston can’t score. They were last in the league in goals for with 196. To put this into perspective, every other team in the league managed to break the 200 goal mark. Ryan Miller is the best goalie in the world. Remember it was only a month and half ago where Ryan Miller put an entire country on his shoulders and forced the juggernaut Canadian Olympic team to a sudden death overtime in the Gold medal match. One lucky bounce for the Americans and Canadian dreams would have been crushed. Ryan Miller scares the crap out of me. So let’s recap, best goalie in the world going against a team that can’t score….
The pick: Buffalo in 5
The Senators have been the streakiest team all season long. Too bad for them they have seem to hit a cold streak right before the playoffs. To further compound problems for the Sens, their big name off–season signing, Alexi Kovalev, has been lost for the entire playoffs to a serious knee injury. On the other side, the defending champion Penguins are getting healthy and seem to be rounding into playoff shape, going 11-6-3 since the Olympic break.
The pick: Pittsburgh in 4
The best thing about the playoffs is it’s where the stars get separated from the legends.