Organizers of the Squamish Valley Music Festival are taking the 2015 event, the sixth annual festival, to a new level with headliners Mumford & Sons, Drake and Sam Smith.

This summer’s festival, produced by Live Nation Canada in partnership with brand.LIVE, will return to Logger Sports Grounds and Centennial Fields in Squamish for three days from Friday, August 7 to Saturday, August 9.

“We believe today’s festival-goer is looking for diversity in the line-up but are also looking to discover new artists,” says Erik Hoffman, Live Nation Canada Senior Vice-President of Talent. “This year’s programming embodies this spirit. Artists accessible enough for all music fans but cutting edge enough for the most discernible music critic.”

More artists will be announced as the festival nears.

Over 105,000 music fans attended last year’s Festival, which makes Squamish Festival the largest outdoor music event in Western Canada. It also had a significant local economic impact for the Sea-to-Sky Corridor with over $32-million generated over the festival’s duration.

Last year, the festival expanded its footprint from 32 acres to more than 80 acres as part of organizer’s ambitions to significantly expand the scope and calibre of the festival and to compete with the return of Pemberton Festival held further up north. The 2014 headliner lineup was comprised of Eminem, Bruno Mars and Arcade Fire.

“The 2014 Festival saw unprecedented growth and success across all areas, including security, transportation, camping and medical services – all with tremendous support from the Squamish community,” says Executive Producer of the Festival and Senior Vice-President of brand.LIVE, Paul Runnals. “We’re building off that momentum again this year with another incredible lineup, continued improvements being made to Festival infrastructure and logistics based on feedback from our festivalgoers.”

Virgin Mobile Canada is returning to the festival this year as its presenting sponsor for the fourth consecutive year. In addition, Spotify Canada is also joining the event to provide music fans with unique playlists of festival performances online, on their phones and through the festival app. The lineup playlist can be viewed here.

Radio Frequency Identification (RFID) wristbands will once again be used to provide festival goers an efficient way of accessing the festival venue as well as a cash-free experience for all onsite purchases at beer gardens, food vendors and merchant sites.

Where: Logger Sports Grounds and Centennial Fields at Squamish, B.C.

Festival passes will be sold through Ticketmaster: 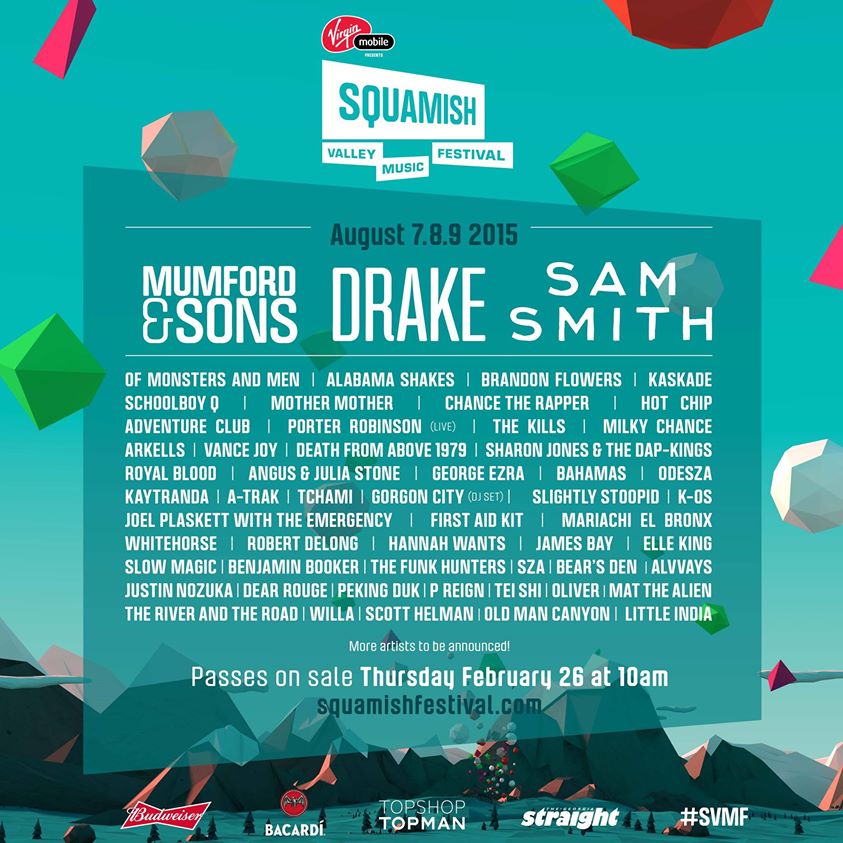