His ability to indulge in crispy, deep-fried potatoes is enhanced by the amount of calories he burns on a 50K bike ride, and also acts as a kind of reward.

Dan, a red-seal trained chef who had a solid background of working at restaurants like The Cactus Club, decided that there weren’t enough places in the city that were doing real Belgian fries, so he decided to open one.

The Spud Shack was born 18 months ago. You’ll find it in the New Westminster Skytrain station, way up on the third floor. It’s one-of-a-kind, and it’s worth seeking out.

Everything on the menu is there because Dan has tested it and tested it again until he is happy with it. And that’s not an easy job.

Although the menu changes regularly, some year-round favourites include fish ‘n’ chips (your choice of cod, salmon or halibut), a handmade fish burger, a veggie burger, and a solid, two-handed, need-a-ton-of-napkins beef burger. 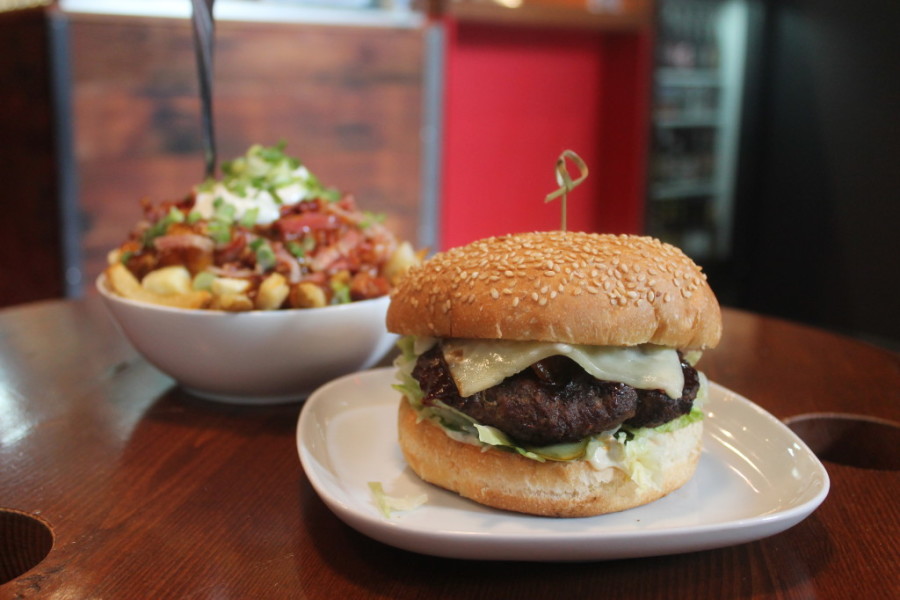 The “Effin’ Good Burger” is deceptive in its simplicity, but it is well done and very tasty. It comes topped with BBQ sauce, smoked onion mayo, bacon, lettuce, pickle, Monterey jack and a delicious, house-made, tomato jam. I enjoyed the Veggie Burger, which, unlike many veggie burgers was not based on either tofu or beans. Rather, it’s made with roasted yams and quinoa, and bound together with oatmeal, making it gluten-free. It’s served with a chipotle mayo, which gives it the faintest kick, peppery arugula, pickled onion and feta cheese.

There is also a Caesar Salad, and a really great Arugula Salad with bacon, fennel and feta, garnished with almonds and croutons. 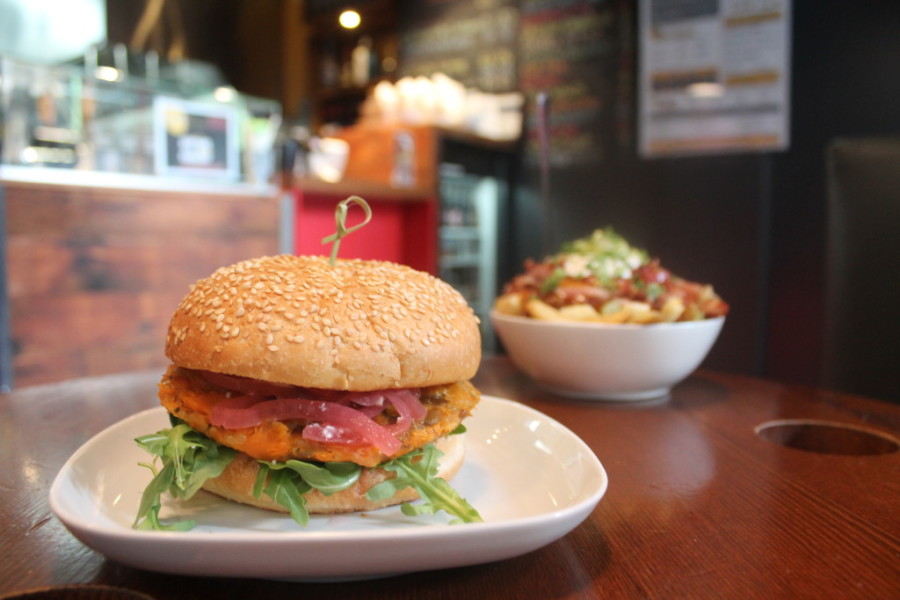 But let’s face it. If you’re going to the Spud Shack, all that stuff plays second fiddle to the fries and the poutine. Potatoes are Kennebecs sourced from Delta, and they are prepared in the traditional Belgian way. First, they are hand-cut, then they are blanched. They are then allowed to cool to room temperature, and then cooked to order. This creates a fry that’s crispy on the outside, but still soft and fluffy on the inside. They even have a special “Frites Tosser” that allows them to create the perfect seasoning on the piping hot frites as soon as they come out of the fryer. There are a dozen different kinds of flavoured mayo to dip your fries into, or of course, you can just choose good, old-fashioned catsup. My fave was the dill pickle mayo, but if you’re feeling fancy, spring for the truffle mayo with rosemary salt.

While the fries on their own are delicious, they also make a great foundation for poutine. Poutine here is made with proper squeaky cheese curds, and a vegan gravy. The Spud Shack is also, I believe, the only place in the lower mainland where you can get a vegan poutine: it’s made with Daiya cheese. 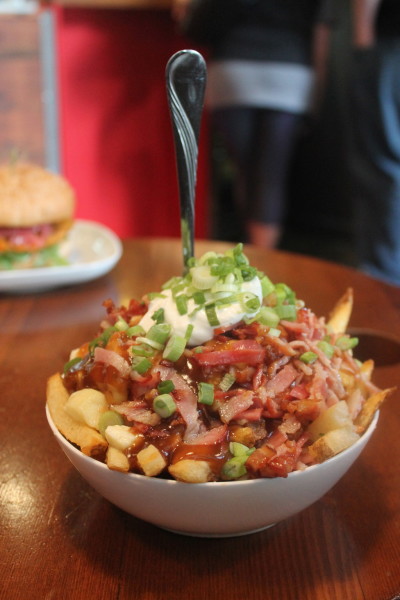 Options abound for your poutine. You can get it plain or fancy. One of the most popular options is the “Loaded Baked Potato” poutine, which includes bacon, green onions and sour cream. You can also get yours topped with Montreal Smoked Meat, Pulled Pork, or Buffalo Chicken with Ranch dressing.

You can round out your meal with some local draft beer or an Okanagan wine, or perhaps a Banana Bread Iced Cream Sandwich.

The space is cozy, all dark wood (hand-finished by Dan), and tables with built-in holes for your fry cones.

If poutine is your destination, check out the Spud Shack. You don’t have to be a triathlete to do so.