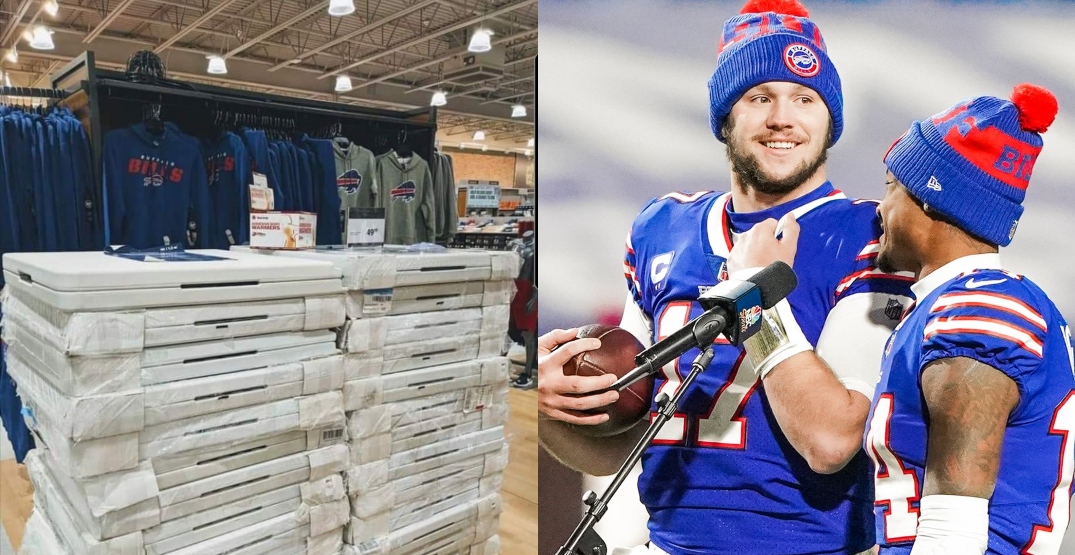 Sports stores in Buffalo are getting ready for Bills Mafia anyway they can.

In preparation for the Buffalo Bills’ upcoming AFC championship game against the Kansas City Chiefs this weekend, Dick’s Sporting Goods has plenty of Bills merchandise for fans to buy.

T-shirts, sweatshirts, hats… It’s all there.

And there are tables.

Fans posted on social media that they noticed that the store, in keeping with Bills Mafia tradition, has a large collection of folding tables available, conveniently sitting next to racks of team merchandise.

Bills fans have grown an affinity for jumping through folding tables to express their fandom and excitement, as stores are taking more action to prepare themselves.

These fans will stand on top of a nearby vehicle or table while a crowd cheers and then leap onto a folding table — WWE style — which collapses amid excited roars. However, with no tailgating allowed due to COVID restrictions, fans have bought tables for themselves to take home and jump through at their leisure.

Many fans on social media were thrilled with the marketing decision by the sports store.

One of the most beautiful things the internet’s given us the last few years… The people of Buffalo being proud to be Buffalonians. #circlethewagons #BillsMafia

That’s how you cross merchandise

This is too good @BuffaloBills fans: folding tables being sold in the Buffalo Bills section of the sporting goods store. Here’s hoping everybody buys *2, and has to use ’em after the next *2 games. Right ? #BillsMafia

If the Bills go to the Super Bowl, be prepared to have happy fans delighted to go through every folding table in Buffalo.