Over the weekend, there were some signs of life for the planned project to build the underground extension of SkyTrain’s Millennium Line along the Broadway Corridor.

Geotechnical crews were spotted on the 700 block of West Broadway, between Heather and Willow streets, drilling holes into the ground to perform tests on the soil conditions in connection with subway project. This was confirmed today by both the City of Vancouver and TransLink.

“The City of Vancouver and TransLink are continuing to work together on a potential Broadway Subway project,” Patricia MacNeil, Communications Manager for the City of Vancouver, told Vancity Buzz. “As part of the early works, contractors are doing geotechnical assessments to better understand the soil conditions in support of developing the project business case.”

“The City is committed to keeping the public informed about progress and as with any project, community consultation would take place as staff prepare recommendations to Council.”

The drilling operation was contracted to Foundex, a locally-based company that specializes in geotechnical drilling. The process involves extracting soil core samples for analyzation in a laboratory to ensure soil condition assumptions are accurate and the proper building techniques are used for tunnel and underground station construction.

“The soil sampling on West Broadway is part of technical work to better understand the scope and costs of rapid transit along the Broadway Corridor,” said TransLink spokesperson Angela Salehi.

Both the City and TransLink were unable to comment on whether testing is planned or has already been performed for other locations along the proposed route. Similar geotechnical drilling and testing work was done along the Canada Line and Evergreen Line routes during the design phases and again prior to the start of construction.

The geotechnical testing work provides a hint that the Broadway roadway could be the preferred path for the tunnel, which will be constructed using a tunnel boring machine. There will likely be an emphasis on thorough soil testing given the major challenges and delays experienced with the Evergreen Line’s two-kilometre-long tunnel boring project.

Previous planning documents by the City and TransLink indicate an underground extension will likely start at the existing VCC-Clark Station and terminate at Arbutus Street as a continuation of existing SkyTrain infrastructure, with stations at the False Creek Flats, Main Street, Cambie Street, Oak Street, Granville Street and Arbutus Street.

With the SkyTrain extension, the existing 99 B-Line express bus would run between Arbutus and UBC. A future phase could extend the line all the way to the UBC campus.

Map of the proposed route along the Broadway corridor, with possible station locations, for the underground extension of SkyTrain’s Millennium Line.

Proponents have estimated that it will cost approximately $1.9 billion to construct the line to Arbutus and an additional $1 billion for the complete route to UBC.

Federal NDP leader Thomas Mulcair also made a substantial commitment to fund transportation infrastructure projects in the country, with the promise of $1.3 billion in new annual funding over the next 20 years.

Meanwhile, Stephen Harper’s Conservative Party was anticipated to unveil funding for the Surrey light rail project earlier this month, but the announcement was postponed due to the refugee crisis. The Prime Minister’s position on the Broadway subway remains unclear.

The provincial government has already committed to fund one-third of the cost to build the Broadway extension, in addition to lobbying the federal government to fund another third.

The final third would come from TransLink and municipal governments, but the proposal to raise the sales tax in the Metro Vancouver region by 0.5 per cent to help fund transportation improvements was rejected by voters. Local officials are said to be working on an alternative funding plan to ensure major components of the $7.5-billion regional transportation plan are built. 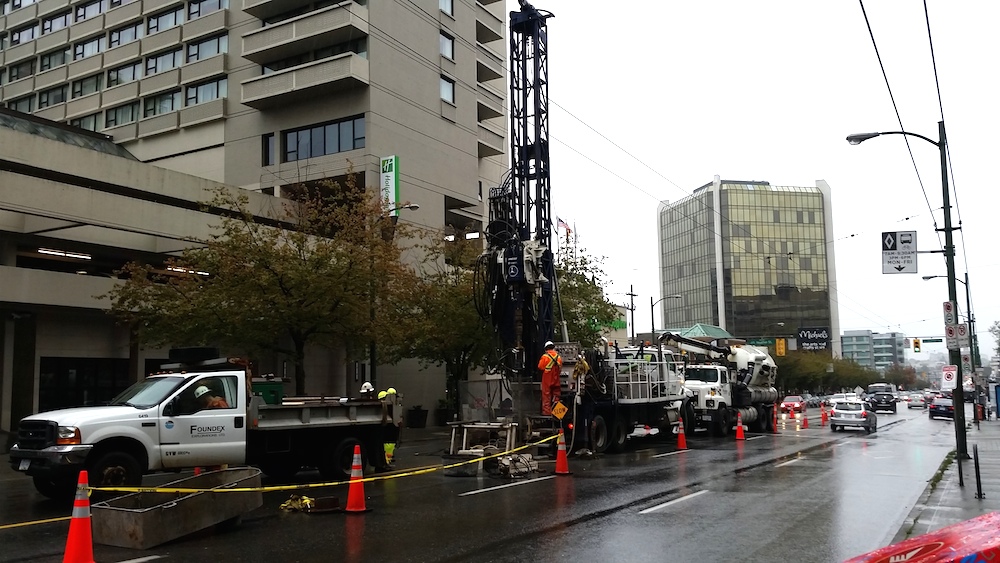