The timing was right earlier this year when Soft Peaks started swirling up their organic milk-based soft serve in Gastown, hitting the scene ahead of the ensuing curve that found multiple new ice cream shops getting scooping in Vancouver.

Now the popular soft serve spot is adding a line-up of scrumptious milkshakes to their menu, shifting some of their sweet attention onto a classic fountain treat.

Launching Thursday, August 27, the Soft Peaks milkshakes will be available in one core flavour (Original) and one monthly rotating special flavour. For September, the second flavour is Chocolate.

It took lots of recipe testing for Dan and Ken Kim to perfect their shakes, which combine their signature organic milk soft serve, milk, and high-quality ingredients, like honey in the Original, or a blend of Torani’s Dark Chocolate syrup and dark chocolate cocoa powder (along with Avalon Dairy’s chocolate milk) for their chocolate shake.

These are truly shakes for milk lovers. The Original is very mild and milk-forward, with the soft, sweet mellow notes of honey. The Vanilla, which will debut in a future month, offers a very fresh, clean vanilla flavour–it’s a classic. 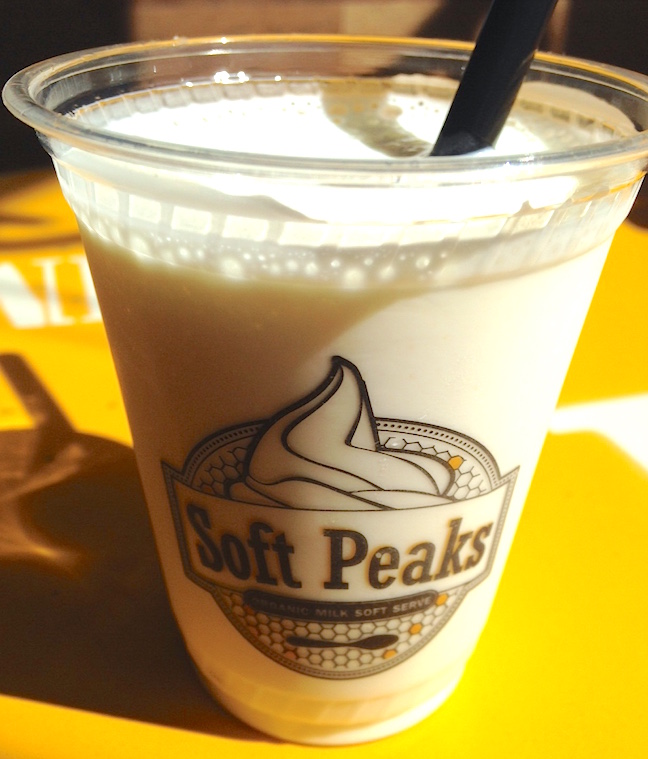 They also were able to share a taste of the forthcoming Caramel Latte flavour, which tastes akin to the filling of a Coffee Crisp bar, and is a fun sipper that keeps the palate chasing the fun blend of sweetness and espresso. The Chocolate is surprisingly un-sweet; it’s a very cocoa-y take on that cherished childhood flavour, and really lets the dusky cocoa shine through, without being sugary-sweet.

The shakes are being served in a 14-ounce size, and come with whipped cream on top at the customer’s request.