As a person new to the world of political activism, it was inspiring and profoundly moving for me to see over a thousand people gathering in front of the Vancouver art gallery on a soggy wet Sunday afternoon for the Vancouver Slut Walk, to support the rapidly growing chorus of voices speaking out against violence against women and victim blaming.

So, you may be wondering: ‘what exactly is all this slut walk fuss about?’ Inspired by the actions of a small group of women who began the ‘slut walk’ phenomenon in Ontario in early April, more and more groups of women (and men) have begun to organize similar demonstrations the world over and the slut walk sensation has begun to sweep the globe. The initial inspiration for a ‘slut walk’ was provided by the comments of a Toronto police officer during a scheduled visit to a college campus, presenting a speech on personal safety, during which the police officer suggested that if women didn’t want to attract unwanted attention and assault they should avoid dressing like sluts. The policeman’s comments were far from unusual or unpredictable when you think about it – this kind of attitude has become pervasive in our society today. Somehow it has become acceptable to let sex offenders ‘off the hook’ by placing the onus on women to dress sensibly and get home early, instead of teaching men that sexual assault and rape is wrong and there will be serious consequences if the crime is committed. And so, the world is finally standing up against this upside down and back to front attitude by marching and speaking out. 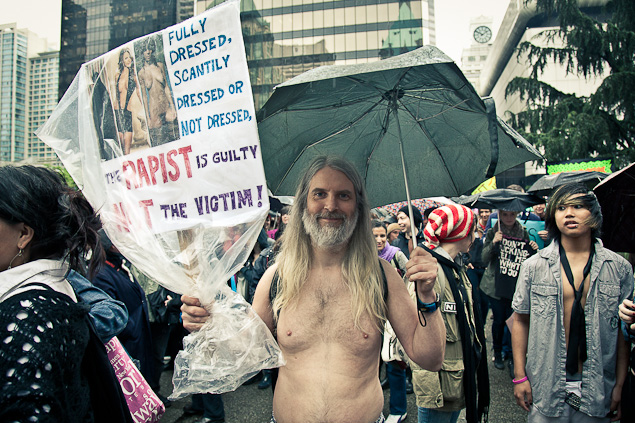 At Sunday’s Vancouver event a number of speakers from several organizations entrenched at the heart of these issues spoke out. We heard from Ariana Barry and Arlana Green from WAVAW (women against violence against women), Darcie Bennett from Pivot (a downtown east side legal assistance organization) and Angela Marie McDougall from BWSS (battered women support services) who poignantly drew attention to the fact that unfortunately violence against women is also an issue underscored with matters of race and socio-economic status. Each woman had her own unique voice on the topic but the theme throughout was constant. Oppression of women is still a huge part of the world we live in today and sex crimes against women are a very big part of that. Rape is not about sex; it’s about power! The final speaker for the march’s launch at the art gallery was deputy mayor, Ellen Woodsworth, a former activist for the pro-choice movement who has accolades as impressive as chaining herself to a chair in the name of protest. Her message was clear. Having once been in the number one spot for women’s right’s in the world, Canada has now dropped down to #51, largely due to the power and oppression wielded by white males in government who seem determined to keep women down, and that has got to change! 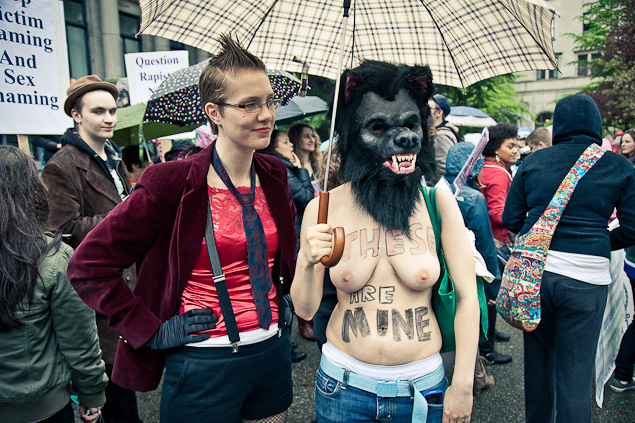 Amongst the crowds of marchers there were women and men of all ages and race and the collage of outfits that people had chosen to wear ranged from the sublime to the ridiculous. My personal favorite was the nudist wearing nothing but a bandana over his nether regions, sporting a sign that explained, no matter what kind of clothes you wear or if you wear no clothes at all, it is never an invitation to be violated. There was even a Balkan brass band in the midst of it all to keep the demonstrators spirits lively.

There has, of course been considerable debate and disagreement over the use of the word ‘slut’ for the title of the demonstration: A word so heavily laden with negative connotations. Many people are distracted or thrown off topic by the use of such a derogatory term to shine the spotlight on this troublesome and sensitive issue – but for me, I can’t help but wonder whether or not this incredibly important topic would have got quite so much media attention if organizer hadn’t chosen such a provocative word to advertize their cause. (This was, afterall the word so aptly provided by that ‘helpful and informative’ Toronto cop).
To those that are offended by the word ‘slut’, I would say that Shakespeare’s famous quote from Romeo and Juliet has an interesting perspective to add to the matter: ‘A rose by any other name would smell as sweet’ – whether we believe that the word ‘slut’ is unsavory and should be avoided at all cost, or whether we want to embrace it, reclaim it and take the power from it that it has wielded over so many sexually active women who have in the past felt shamed into denying their own sexuality – let’s call a spade a spade. Whether you like sex or you don’t, whether you embrace your own sexuality or you don’t, whether you want to be slutty or you don’t, there is never a case for arguing that a woman’s behavior, or the clothes she wears, gives a man permission to violate her. 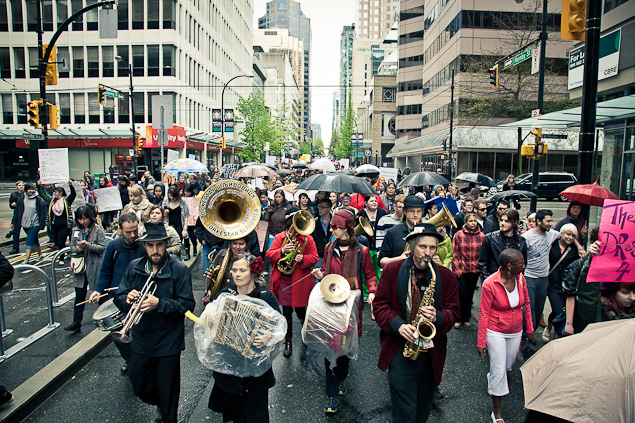 No matter where you stand on the word slut, most people are in agreement that the underlying message of Sunday’s Slut Walk in Vancouver is a powerful one that needs to be heard and understood the world over: Victim blaming is wrong!

Sadly, the need for services that provide for assaulted and abused women is still a fact of life, but if you are moved by this fact and wish that there was something concrete you could do to help, then you will be pleased to hear that on May 29th, the annual walkathon to raise money for Vancouver Rape Relief and women’s shelter will be taking place around the seawall. For more information on the walkathon or other ways that you can help and get involved please check out the website: http://www.rapereliefshelter.bc.ca/learn/resources/walkathon. 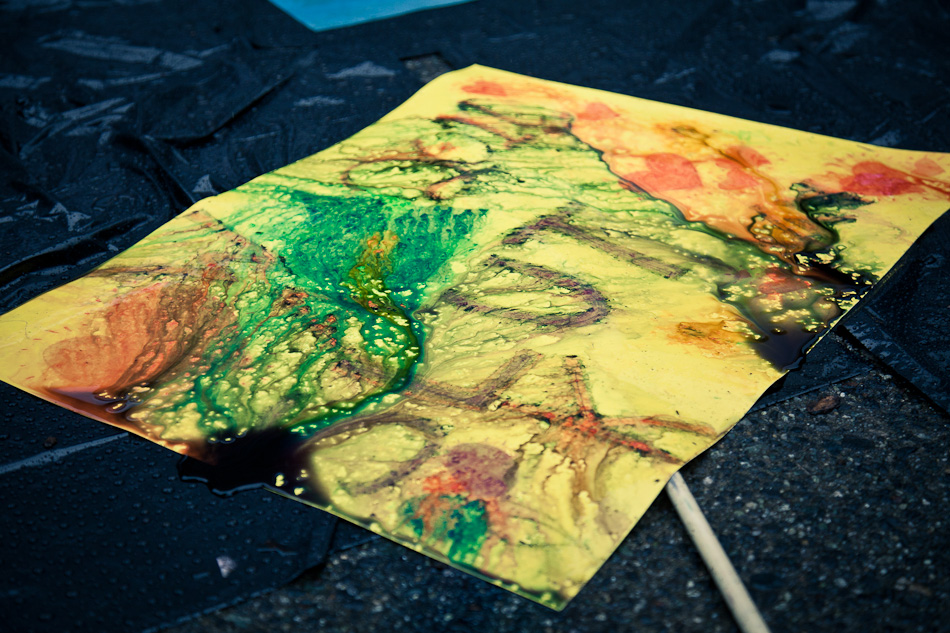