UPDATE at 12:10 p.m. – SkyTrain’s Expo Line is resuming regular service. Free transit on all services applies for the entire day.

For the second time in two days, service on SkyTrain’s Expo Line has been severely disrupted during the weekday morning rush hour, causing mayhem at stations.

Regular service is only operating between King George and Edmonds stations as well as the Millennium Line route from VCC-Clark with trains turning around at Columbia Station.

A fire near Main Street-Science World Station at 11 p.m. Thursday was sparked while crews were performing track-grinding maintenance work. Sparks flew into a bird nest under the tracks, causing a small fire but severing critical fibre-optic communications cables between the control centre and the western section of the Expo Line.

Until then, tens of thousands of commuters will have to make alternate travel plans or endure the large crowds waiting for the ‘bus bridge’ shuttles between affected stations.

As a way to show customer appreciation, TransLink is providing FREE transit for all services across Metro Vancouver. This includes buses, SeaBus, West Coast Express and all three SkyTrain lines.

Here are photos and riders’ reaction tweets of the shutdown: 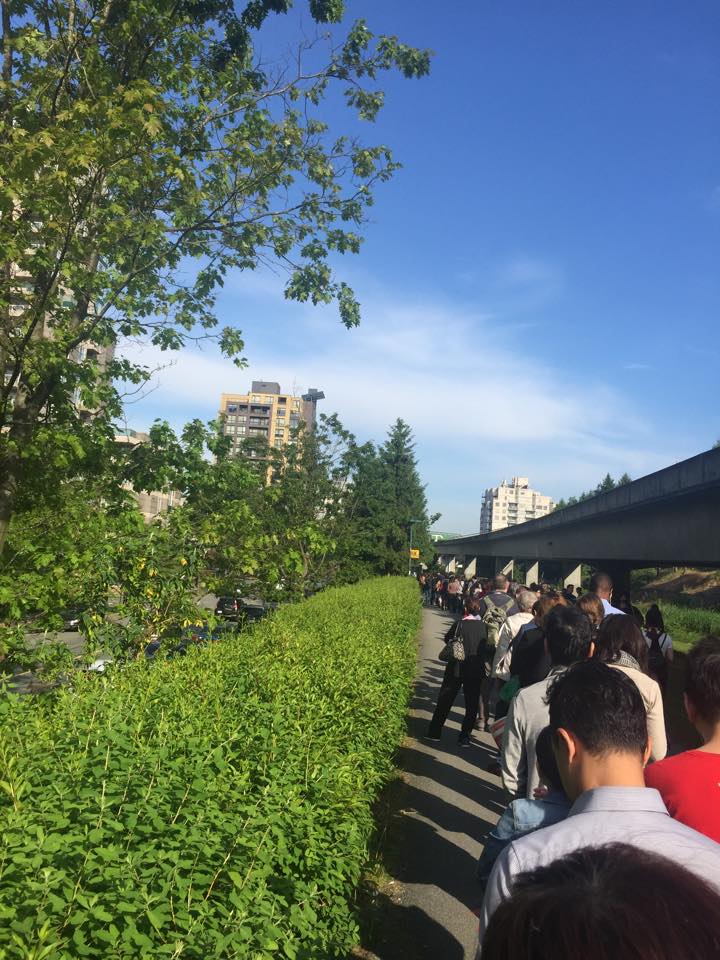 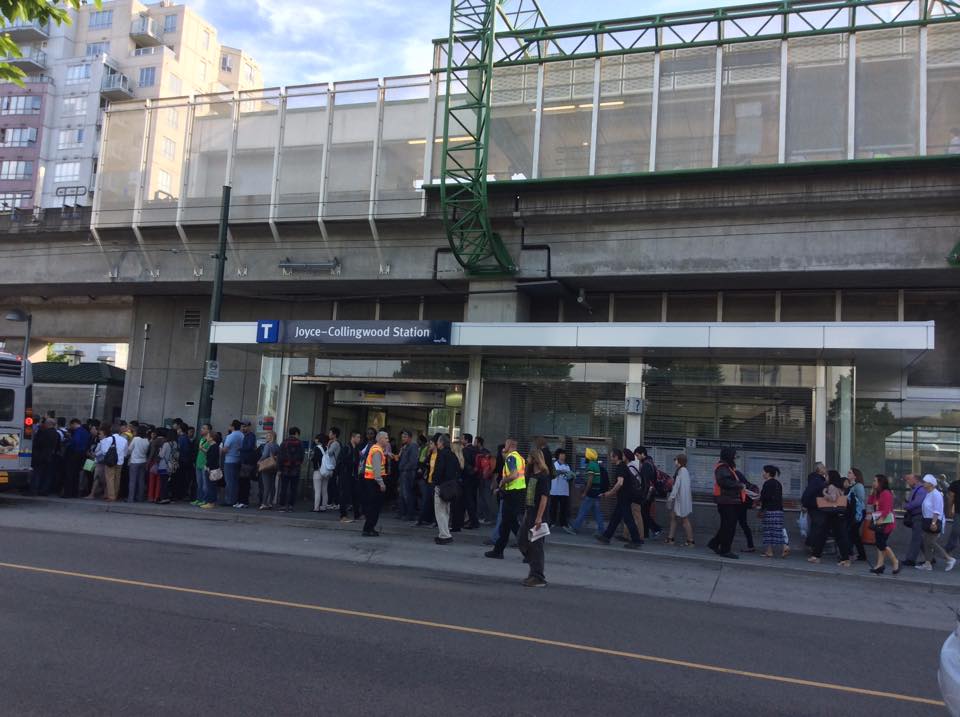 Sorry @TransLink, not a #SkyTrain “delay” a the Expo Line is actually shut down between Joyce and Waterfront. pic.twitter.com/RGRfivpaAO

At Broadway and Commercial, lots of #skytrain riders seem surprised they have to get on a packed bus. #cbc pic.twitter.com/rDJsEKDoFi — Rafferty Baker (@raffertybaker) May 22, 2015

Transit Police telling frustrated passengers how to get downtown. I already met a guy who missed a flight. #skytrain pic.twitter.com/19rrMawRh9

Line up not only around block, winding, but also inside Joyce station. @TransLink #SkyTrain pic.twitter.com/xcxnjV59WC — Charmaine de Silva (@char_des) May 22, 2015

There was a fire on the tracks apparently. Good thing I don’t need to go downtown today. #skytrain #busymorning #iwantbreakfast

Bus bridge is starting to back up. Ten minutes ago, line was small. Now backed up. @TransLink #SkyTrain pic.twitter.com/IG0QqjLzH4 — Charmaine de Silva (@char_des) May 22, 2015

That line just keeps growing. Next on BT: @GS_Harper is back at Joyce-Collingwood Station after #Skytrain shutdowns. pic.twitter.com/D4tYFZ2GAc

Transit supervisor informing commuters that this bus will stop at all the Skytrain Stations to Waterfront. pic.twitter.com/NENGZyqdiT — Greg Harper (@GS_Harper) May 22, 2015

You can see a bit of the burn marks up there…and plenty of places for birds to make a nest. #skytrain #cbc pic.twitter.com/Kv0U3o77oW — Rafferty Baker (@raffertybaker) May 22, 2015

No one here thought they would be hopping on the “Skytrain Delay” bus this morning. pic.twitter.com/gGAeUI9vox — Greg Harper (@GS_Harper) May 22, 2015

Big spiralling line at #Joyce #Skytrain station as frustrated people wait for buses. #transit #shutdown #news #livehit A photo posted by Nafeesa Karim (@nafeesakarim) on May 22, 2015 at 7:28am PDT

#SkyTrain work vehicle on the tracks just east of Main Street. Tonight’s shutdown reportedly the result of a fire. pic.twitter.com/kpkkk4m1ry

Last day taking the Skytrain and it sets on fire. I better get a tan & burn some mad calories on this 2hr walk to work @TransLink /p>— Caryl Sinasac (@CarylSinasac) May 22, 2015

People are bigger #Skytrain bandwagoners than they are for the Canucks. It works 99.9% of the time, SHIT HAPPENS, get over yourself

If y’all are taking the skytrain, you might wanna call your work and tell them you’ll be late. — feeling annoyed