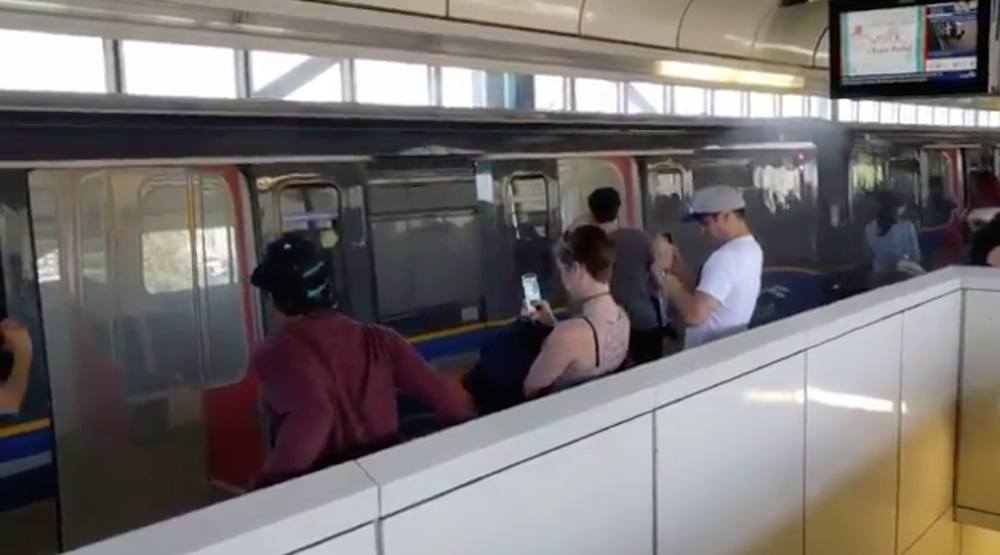 Smoke billowing out from the interior of a Mark I car at the Expo Line's Scott Road Station. (Aaron Maharaj / Twitter)

Passengers on a SkyTrain car traveling from King George Station in Surrey to downtown Vancouver were forced to evacuate the train at Scott Road Station early this afternoon.

Nicholas Alexiou, who was on the problem train, told Daily Hive that one of the cars began filling up with smoke shortly after it departed Gateway Station.

Wow the skytrain car I was in caught on fire!! @TransLink @GlobalBC pic.twitter.com/O7ukSc1D2y

Only one car on the six-car Mark I train, the oldest model of SkyTrain car dating back to the Expo ’86 era, was affected.

According to TransLink, the problem train was quickly pulled out of service and this weekend’s regular service resumed. The cause of the billowing smoke is unclear.

Scheduled delays for maintenance this weekend

Expo Line trains and stations are more packed than usual today, but it has nothing to do with the smoke incident.

Prior to the start of the weekend, TransLink announced it would be performing scheduled maintenance on the Expo Line over the weekend daytime hours to replace running rail and rail pads, which necessitates running single-tracking between Commercial-Broadway Station and Main Street-Science World Station.

Passengers traveling on the Expo Line should expect 15 to 20 minutes of additional travel time as a result.

The Expo Line was scheduled to operate under this configuration from Saturday’s start of service to 2 pm, but that has since been extended to 4 pm.

This configuration is scheduled to continue on Sunday from start of service until 3 pm as well as Monday and Tuesday from 9:30 pm until the end of service.