“In a room full of strangers…discussing tanking and the issues of the day…Bo wants to talk to you because you make him want to…talking it up on the Bo Horvat show….talking about lack of scoring…talking about shiny medallions…”

That was my best attempt at re-creating the Barry Gibb Talk Show sketch on SNL. You’re welcome.

Now on a night when the Flames torched the Canucks 7-3, normally there would be plenty of things to get upset about.

Bartkwoski making empty threats with his eyes on defence.

Tryamkin doing the ol’ beer league trick of directing traffic once he lost his man.

The Sedins being invisible.

The Canucks leaving Ryan Miller out to dry.

You could go on and on. And while we’ll touch on a couple of those, with only one game left, there’s no real reason to get mad anymore.

As Rob points out, even #TeamTank and #TeamCulture have mostly put aside their weapons, as the battle has shrunken to a small 3% gap.

You can’t even get drunk off of that 3%, so why bother yelling?

So, what do we do with a game in which the Canucks got ripped apart, and it doesn’t even matter?

We laugh about it. Have some fun. Look forward to next season.

Place all our hopes and dreams on Brock Boeser and try not to crush him.

Whatever you do, though, do NOT run a draft simulator. You’re better than that.

1. Our boyfriend’s back and you’re gonna be in trouble 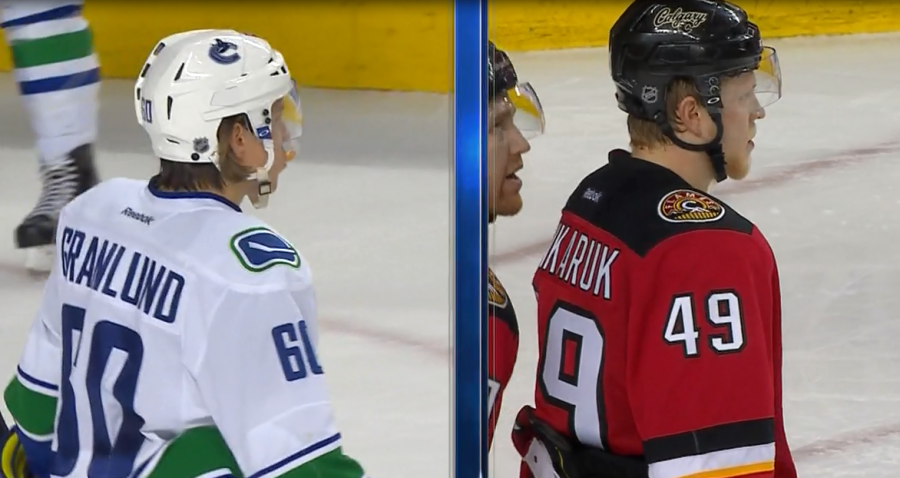 Yes, this game featured the newest “We won the trade!!” battle. It has a long long way to go if it wants to come close to the epic battle waged by Cody Hodgson and Zack Kassian, but it got off to a good start:

Granlund will give away the puck to Shinkaruk, who'll then score. #bookit

Shinkaruk +1, net presence, cycling on pp…hmm sounds like someone who could play with the Sedins

Now, Shinkaruk had better linemates in Monahan and Gaudreau, while Granlund had to make do with Virtanen and Kenins, but linemates aside Shinkaruk stood out over Granlund in this one.

Obviously it’s one game, and you don’t want to rush to conclusions, but if you want to embrace that worrying feeling you got in the back of your head when you first heard about this trade, it’s probably ok to do so for a little bit. What else is there to do, really.

Either way, this is a storyline we shall continue to see being played out for the next three to four seasons, so strap yourself in!

2. So you had a bad day Ryan Miller

Man, this game was hilarious to watch if you don’t care about winning or the goalies feelings.

To be clear, this game wasn’t Ryan Miller’s faults. There were more odd man rushes than a Juggalo mosh pit in this game.

Honestly, every time you took your eyes off the TV it felt like a 2 on 1 broke out the moment you looked back.

And give the Canucks credit, they offered up quite a variety of defensive breakdowns. On the powerplay. Shorthanded. Even strength. Much like the Canucks defence, Doug Lidster’s glasses couldn’t transition quickly enough to take it all in.

During intermission the contestant shooting from center ice requested a Canuck come out because he felt it would improve his odds of scoring.

But what is a 7-3 game without video evidence? Let’s look into this one.

Give Miller credit, he was battling in this game all the way up to the sixth goal (where he promptly gave up on life). He made some nice saves early to keep the Canucks in this one. Things did get weird though, when he turned around backwards and was making saves the wrong way. 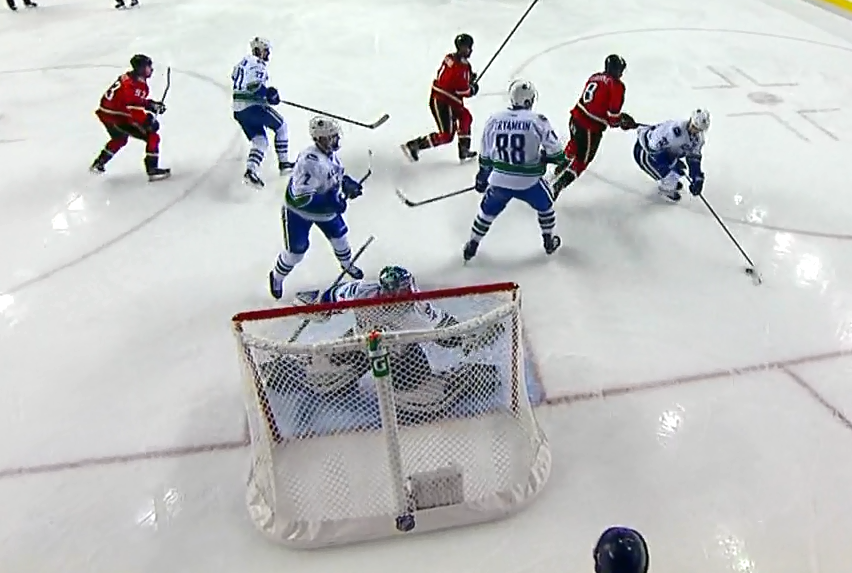 As we’ve seen this season, when Miller stops trusting his defence, he gets super aggressive, and it becomes super fun to watch (very efficient butterfly goaltending is boring, we all know this), if less effective.

Oddly enough, Ryan Miller would eventually get scored on by having the puck banked in off of him. If he had been facing his own net, he would have saved that one. Maybe Miller was on to something…

Despite the early goals, the Canucks were actually tied 2-2, and Miller was still battling like a bad ass to keep it that way.

Then much like when Brock Lesnar appears, here comes the pain.

Vancouver, deploying a three man triangle down low designed to cover nobody, watched Joe Colborne calmly tip in a goal to put Calgary up 4-3.

Pedan, who started the game at forward, but because he’s a rogue maverick who does what he wants, ended up playing on defence at times.

Much of Vancouver cheered, because turning him into a forward seems like a death sentence for his career. Everyone kind of wants to see him do his thing on defence in these games that don’t matter, because you might as well see what he’s got.

Then Pedan went and did that. He pinched at the wrong time, ran into his own team mate, and gave Calgary a breakaway.

And he’s not a former Medicine Hat Tiger, to top it off.

Pedan did himself no favors with Coach Willie tonight.

Then much like a case of herpes, the 2 on 1’s started breaking out. Hutton did his best to cut off the pass, but Backlund is a tricksy devil, and he got his hat trick goal.

That was short handed by the way.

Just laugh, it’s what everyone else did.

Then Deryk Engelland of all people scored on a two on one to give the Flames a 6-3 lead.

Dereyk Engelland, he of 17 career goals.

This is when Ryan Miller officially checked out.

The Canucks blessed us with one more goal, a classic Bang Bang Bartkowski defensive effort, and just like that…

Again, none of it matters, but it was still interesting to see how bad it got at times. Next season can’t come soon enough.

That puck is a keeper.

Tryamkin got his first NHL goal, and while it wasn’t a classic (Shinkaruk tipped it in), the post goal celebration was a thing of beauty:

Had anybody gotten in the way of that punch celebration, they’d be dead.

Now, Tryamkin’s conditioning has caught up to him these last few games, but it’s hard to call his tenure with Vancouver anything but a success so far.

Yes, tonight he used the “I’m too tired, hey you, yeah you, you cover my guy” move all us beer leauger’s have relied on over the years, but it wasn’t a great game for anyone, really.

Give him an off-season to improve his condition, and maybe let him stay at Ryan Kesler’s garage to work on his shot, and he is a player Canucks Nation should absolutely be excited to watch next season.

Horvat with an assist on Etem's goal.. Means a 40 point season.

Yes, Bo Horvat managed the 40 point season that was so hotly contested before the season started.

The major bets made at the start of the season was if Bo would get 40 points or not. Nestled in snuggly behind Hank and Sutter, it was seen as a solid challenge for Bo to get 40 points in a more defensive role.

As we all know, Sutter had an affair with the injury bug, and Hank probably had 3 of his ribs cross checked out by week 3, which left Horvat to do some heavy lifting for a young player. At one of the hardest positions to play.

So yes, people should celebrate the season Bo Horvat has had. He’s tried to dangle every player in the league at one point, but that represents how Horvat has played, all out, all the time. Even in these junk games, if there is one guy out there working away, it will be Bo Horvat.

Here’s a Horvat goal for you to enjoy. Savour it. Enjoy it. Love it.

Here’s his assist on Etem’s goal.

Speaking of Etem, he has turned up his play the last five games and is working hard to impress the team in the late goings.

Instead of getting caught up in Nascar mode and circling the rink, he’s been going to the net, getting chances, and getting goals. A good way to end the season if you’re an Etem fan.

I have no idea why Dorsett went after Bollig here.

Maybe it’s all of them?

@TheStanchion that's why you need the veterans around. To create a culture of stopping after one burrito

This is true, maybe Dorsett’s true value is the guy who warns you at the buffet table to slow down.

“Hey, let your stomach settle a bit, ok? I’m just looking out for you.”

@TheStanchion well done. Was sad to see there wasn't "I got shot" award pic.twitter.com/dbE2qb59Vd

I forgot to honour Adam Cracknell (whom I quite enjoyed during his time in Vancouver on that fourth line), so here is a bonus Stanchie being handed out (the rest of end of season Canucks awards can be found here).

Is there a better picture to represent the 2015-16 Canucks season than Cracknell looking like he just got shot (and/or had a stick inserted into his rear), and Alex Grenier getting what looks like his own stick hit into his eye?

I figured it out – #Canucks players are using the PP as time to rest. No one wants to move.

I also want to give a shout out to all the Vancity Buzz writers here who came up with pre and post game content all season long. This was one of the hardest seasons to write about in years, so if you’ve enjoyed the work of Omar, Rob, Ryan, Clay, Ian, Lachlan or Steve reach out and give them a tweet of thanks if you’re so inclined.

It means a lot when the readers show their support and remind us why we do this!

Or you can reach out and just yell at us. That works too.

From folks I've talked to recently, I would expect Thatcher Demko to sign with Vancouver instead of returning to Boston College next year

Demko lost his semi-final match up in the Frozen Four tonight (insert “Can he win the big game?” think pieces from people or “How many friends does he have on the team, really?” from Iain Mcintyre), but the more pressing issue is getting him signed.

Should he want to, he can wait a year and test free agency. The fear of course is that he might pull a Jimmy Vesey and opt to have 29 other choices for a team.

This is why you must clutch this tweet to your heart and hold it dear, and pray it to be true.

Brock Boeser (BAROOOOOOOOOOOOCK BOESEEEEEEEEEEEER) was playing in the other NCAA Frozen Four semi-final, and he played a huge role in booking North Dakota’s ticket into the Finals with two assists, one of them being on the go ahead goal with under a minute left. It was even off of a faceoff which advanced stats assure me are useless.