Earlier this month, we shared Amsterdam’s dramatic evolution from a city choked by cars during the 60s and 70s, to the people-friendly place it is celebrated as today. But as it turns out, there is a North American city that has a far more relevant, accelerated, and proximate transformation to draw on for inspiration, and it is located in the Dutch capital’s former colonial namesake: New Amsterdam.

During her six-year reign as commissioner of the New York City Department of Transportation between 2007 and 2013, Janette Sadik-Khan changed the way New Yorkers see and use their single biggest asset: their 6,300 linear miles of city streets, an astonishing 25% of the city’s land mass.

Among many achievements, her department installed over 400 miles of new bike lanes and 60 public plazas, including the remarkable overhaul of Times Square. They also launched the largest public bike share scheme on the continent, seven new BRT (Bus Rapid Transit) routes, and rewrote their street design and street works manual from the ground up. 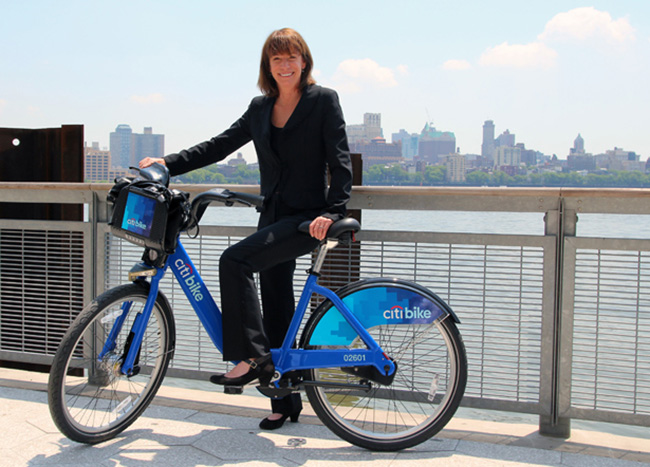 But these successes didn’t happen without a fight. “When you push the status quo, it pushes back, hard,” Sadik-Khan states unequivocally.

So, without further ado, here are six strategic takeaways from a real-life, New York City Streetfight:

1. Consensus is impossible, and inaction is inexcusable

In Streetfight’s early chapters, Sadik-Khan and Solomonow lament the incredible lengths politicians and bureaucrats often go through in order to satisfy every single stakeholder on a given project. You can’t please everyone, they insist, and such feigned attempts to build consensus are often used to stall much-needed safety improvements by “leaders” unwilling to lead. At the same time, the status quo is simply unacceptable.

“Transportation is one of the few professions where nearly 33,000 people can lose their lives in one year and no one in a position of responsibility is in danger of losing his or her job,” they remind us.

We’ve spent decades engineering our streets for minimum inconvenience to automobiles, and the next century will be spent undoing that cost to our health, security, and mobility.

2. When it comes to street design, less is often more

In maximizing the convenience and security of those inside automobiles over the years, we’ve made some puzzling and dangerous decisions that directly affect the wellbeing of city-dwellers outside of those cars.

For example, we’ve designed most automobile lanes to be twelve feet in width (even in an urban setting), despite the fact that the typical Toyota Camry is just six feet wide, in order to provide a safety “buffer” typical of rural highways.

By revisiting some of those design decisions, such as reducing lane width to nine or ten feet, we’re able to unlock the hidden potential found in many of our streets, finding additional room for wider sidewalks, protected bike lanes, and generous bus stops. Fulfilling this potential means a much more effective use of space along these corridors, moving a greater number of people in a quicker and more secure manner.

3. Keep it light, quick, cheap, and don’t be afraid to fail 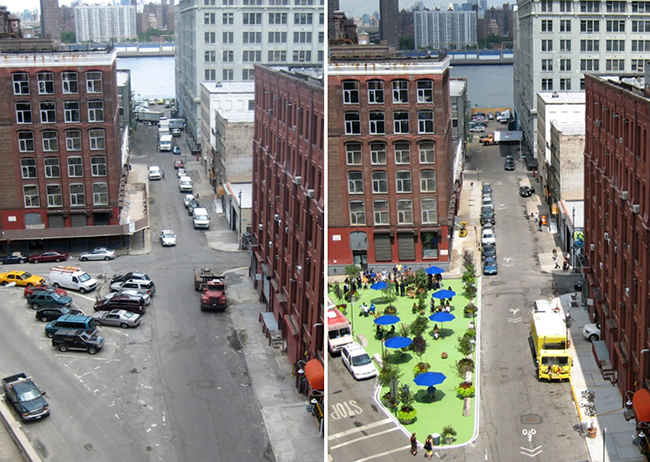 As the old adage goes: “It is often easier to ask for forgiveness than to ask for permission.” And Sadik-Khan tested that theory (almost) to its breaking point over her six years in charge.

Knowing that seeing is truly believing, Sadik-Khan and her team would often roll into a location at the end of a business day, and transform it with some paint, planter boxes, and inexpensive plastic chairs before the next morning.

While many city officials make the mistake of over-consulting and over-engineering a proposed solution, these lighter, quicker, and cheaper options allow you to experiment with pilot projects before making them permanent (and yes, sometimes even fail). Structural changes to our streets also require a cultural change, and that can only happen when we get to experience these alterations first-hand. 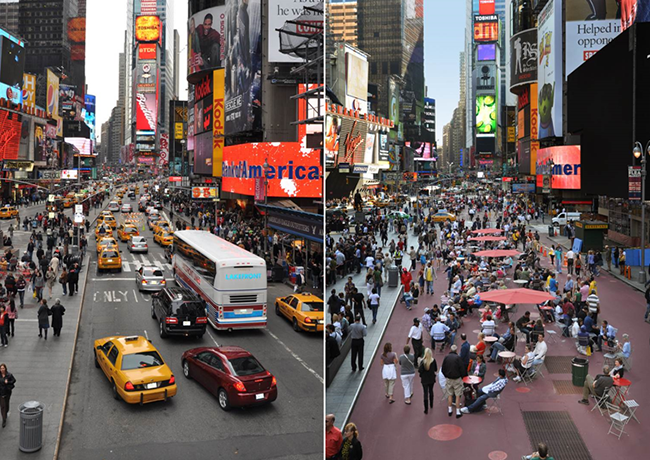 Far too often, the arguments made against a proposed street improvement are based on fear of change, drawing from personal anecdotes and emotions rather than reality. But officials have started evaluating more tangible and scientific parameters to make these decisions.

On that front, Sadik-Khan, and her employer Mayor Michael Bloomberg were on the cutting edge. “In God we trust. Everyone else, bring data,” was Bloomberg’s motto, and the single biggest demand of his employees.

Using GPS data from the city’s 13,000 yellow taxis, sales receipts from the NYC Department of Finance, and analysis of the NYPD’s Motor Vehicle Collision Reports, Sadik-Khan was able to counter the memes and backlash with cold hard facts, measuring how safer streets can simultaneously reduce congestion and increase retail activity. 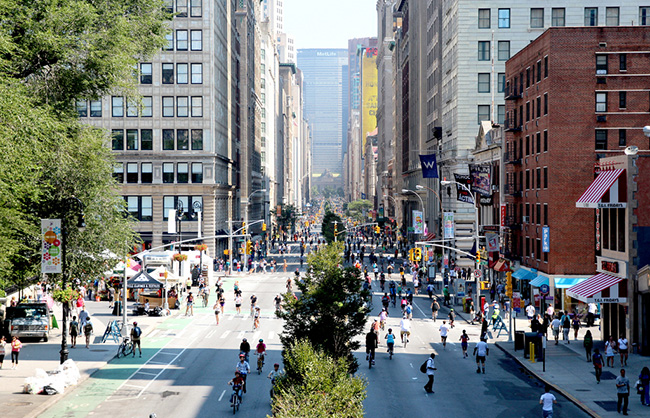 “The public domain is in the public domain,” Sadik-Khan and Solomonow tell us, and there is no shame or copyright law preventing city officials from borrowing ideas from their peers – especially in the Internet age. In fact, it should be actively encouraged.

Many urban leaders are fighting the same fights, learning from mistakes and successes, so why not pool those resources and share those lessons?

The most blatant example during the Sadik-Khan era was the Summer Streets program, an event that opened seven miles of streets for walking, running, and rolling – without the threat of cars – lifted directly from the Ciclovias of Bogota, Colombia. Summer Streets has since become a highlight of the local event calendar, while its predecessor continues to inspire citizens around the world to rethink their streets as shared public space.

6. When it comes to transit, respect the humble bus

The humble bus is undoutedly the least sexy instrument in the transportation planner’s toolbox. Not nearly as desirable as trams, subways, or gondolas; buses have a stigma attached to them, one that Sadik-Khan shared until looking for transit inspiration from elsewhere. She discovered 194 cities around the world – such as Bogota, Melbourne, Seattle, and Ottawa – that were moving 32 million passengers a day on 3,200 miles of streets.

These bus rapid transit (BRT) lines act like a “surface subway”, using high-capacity buses, and permitting passengers to pay their fare beforehand and board via all doors. Best of all, these lines were using dedicated lanes on existing road infrastructure, moving as many people as trains for a fraction of the price. This was compelling enough for Sadik-Khan to initiate seven new BRT lines across New York’s five boroughs. 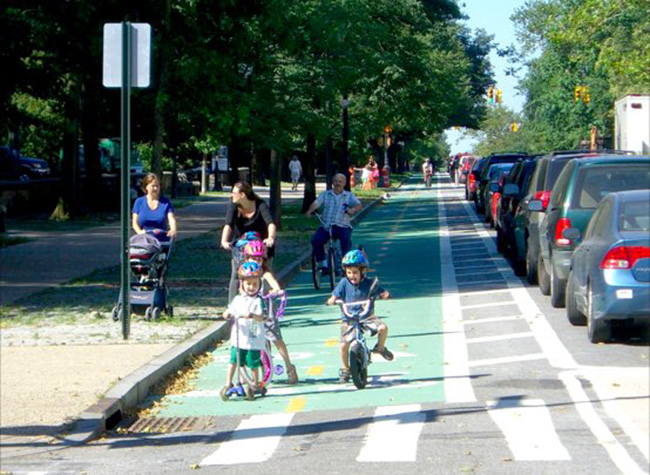 Funnily enough, during Sadik-Khan’s reign as Transportation Commissioner, critics used one particular meme over and over again: “New York isn’t Amsterdam.” But, as has been pointed out repeatedly, neither was Amsterdam not too long ago. It took a series of concerted efforts over several decades to get where it is now.

In six short years as Transportation Commissioner, Janette Sadik-Khan went from strength to strength, taming the mean streets of New York, and transforming it into a welcoming place where more women, children, and seniors feel comfortable walking and cycling on their city streets.

By initiating the cultural changes needed for such a shift, she took the brunt of the backlash from the press and the public, but laid important groundwork that allowed her successors to continue that fight. Within days of taking office, incoming Mayor Bill Blasio announced a comprehensive Vision Zero policy, a program aimed to reduce all traffic fatalities to zero, which will (hopefully) serve as the centrepiece of his administration’s legacy.

So New York may never become Amsterdam. And that’s fine with Sadik-Khan. It is happy simply becoming a better version of itself, and inspiring other cities to do the same. “If it can happen in New York City, according to the Sinatra model of transportation theory,” Sadik-Khan insists, “It can happen anywhere.”

Janette Sadik-Khan and Seth Solomonow’s Streetfight is now available in bookstores. Ms. Sadik-Khan also makes a SOLD OUT appearance at the Playhouse, 7 p.m. on March 22, sponsored by SFU, City of Vancouver, and Downtown Vancouver Business Improvement Association. Don’t have a ticket? The talk will be webcast free of charge.