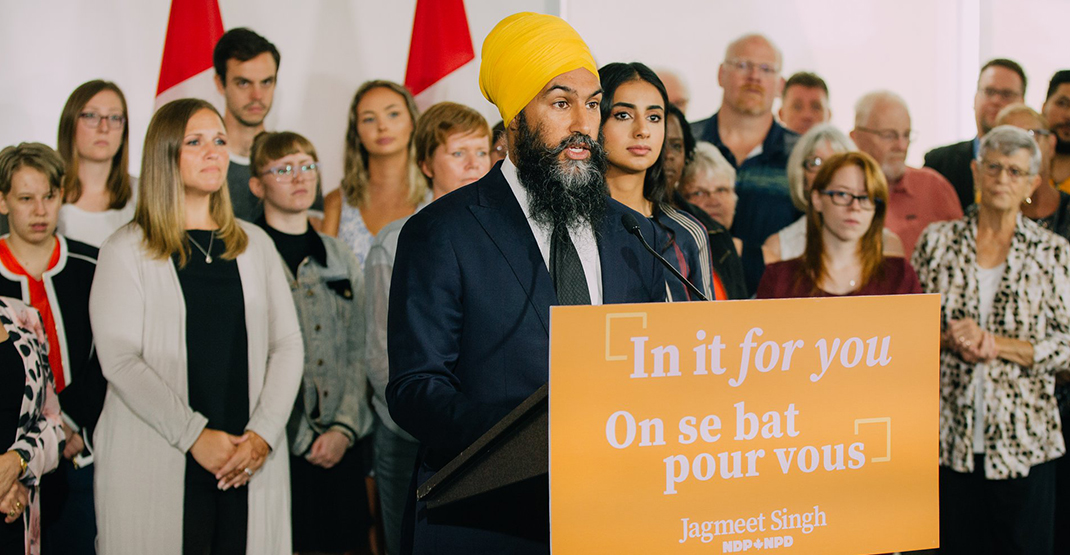 NDP Leader Jagmeet Singh pledged Friday to create a $40-million plan to help safeguard Canada’s coastlines and accused Liberal Leader Justin Trudeau of taking actions that have threatened the environment among them.

Singh also said the NDP will always fight against the controversial Trans Mountain pipeline expansion, which would significantly boost tanker traffic off the BC coast.

He repeatedly took aim at the Trudeau government’s decision to buy the pipeline and unfinished expansion work for $4.5 billion of taxpayers’ money.

Singh made the announcement on a day when people across the country, and around the globe, marched as part of an expanding international movement to condemn government inaction on climate change.

“People around the world are taking to the streets, particularly young people, and they’re demanding that leaders listen to them,” Singh said at a park overlooking the harbour in the city of Ladysmith.

“They’re calling out the betrayal, they’re saying: ‘How dare you betray our futures.’ They’re angry and they’re frustrated and they’re right to be.”

He was asked about Trudeau’s meeting Friday with teenage Swedish climate activist Greta Thunberg in Montreal. Singh shrugged it off and said, “it’s obviously Greta’s choice who she wants to meet with.”

Singh then continued with his criticisms of Trudeau, saying the Liberal government maintained subsidies for the fossil-fuel sector and exempted the biggest polluters from its carbon-pricing program.

“It’s clear that he works for the powerful — the people at the very top,” Singh said.

The NDP leader was to march with protesters in Victoria on Friday as part of the global climate strike.

It was the fourth consecutive day Singh campaigned in the province, where the NDP won 14 seats in 2015.

While Singh’s words at public events have largely been focused on Trudeau’s record, the NDP is believed to be battling a stronger push by the Green Party, especially on Vancouver Island.

Singh’s stop Friday was in the island riding of Nanaimo-Ladysmith, which the NDP lost earlier this year to Paul Manly of the Greens in a byelection.