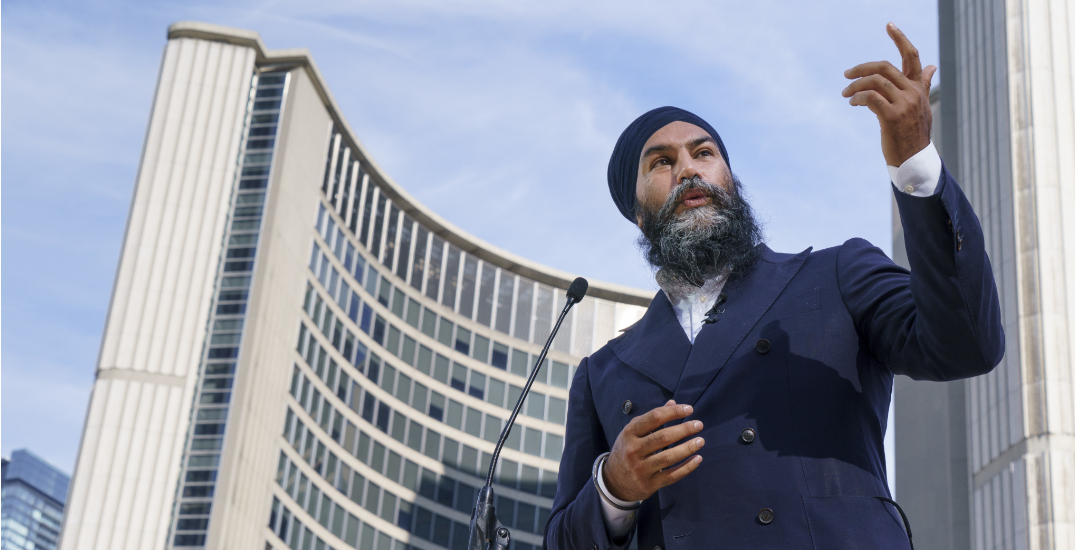 The timing of the current federal election may have impeded a prompt and adequate Canadian response to the crisis in Afghanistan, NDP Leader Jagmeet Singh said Sunday as he paid tribute to a past party luminary.

Singh accused Liberal Leader Justin Trudeau of prioritizing an election he has previously decried as unnecessary over the needs of Afghans plunged into chaos after the Taliban seized control of the country last week.

His remarks came during his only scheduled campaign stop, in which he marked the 10th anniversary of the death of revered former party leader Jack Layton.

“Canada’s response seems to have been quite delayed…and we still have many allies that have been left behind,” Singh told supporters in downtown Toronto. “Did Justin Trudeau spend more time focusing on an election, rather than focusing on this humanitarian crisis? I think it’s a legitimate question.”

Singh critized the government for what he describes as a sluggish effort to bring residents who previously supported Canada’s diplomatic and military efforts to safety outside of Afghanistan.

He also alleged the process to apply for evacuation was complicated and “bureaucratic.”

Afghanistan fell to the Taliban last weekend, a development that destabilized the country and sowed chaos and uncertainty. The events forced President Ashraf Ghani to flee the country.

As of Saturday, officials said two flights have left the country carrying fleeing Afghans who once worked with Canadian forces in the war-torn country.

“There was an initial report that maybe the Taliban would not be as brutal, that does not seem to be the case at all, we’re seeing that same brutality,” Singh said Sunday. “We’ve got to do everything to keep our word to make sure that out allies, those translators that worked with our forces, are brought to safety.”

Defence Minister Harjit Sajjan held a Sunday morning news conference with several of his cabinet peers, saying Canada will work tirelessly to evacuate people from Afghanistan “for as long as it is safe to do so.”

Singh, meanwhile, also pledged to introduce a bill in the House of Commons to change the name of Layton’s former riding of Toronto-Danforth to Danforth-Layton in the former leader’s honour.

“Here in Toronto, people know the legacy of Jack Layton and how he touched the lives of so many people, how he fought so hard to make people’s lives better,” Singh said.

The NDP made huge gains under Layton’s leadership, winning 103 seats across the country in the 2011 election and catapulting the party to official Opposition status for the first time.

Layton’s orange wave crashed through Quebec, where the party won 59 seats just months before his death.

The NDP lost most of those seats in the 2015 election, and the party was all but shut out of the province in 2019. At time of Parliament’s dissolution last week, there was only one New Democrat representing a Quebec riding.

Singh is trying to win back some of those 2011 voters, having launched his campaign in Montreal.

He said Sunday he was proud to carry on Layton’s legacy of offering Quebecers, and Canadians, a party that would stand up for them and for their families.