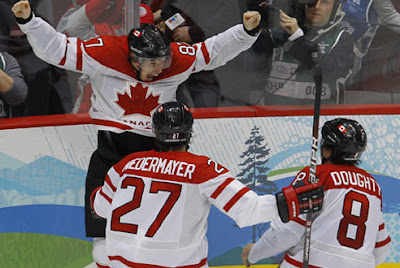 Sidney Crosby has recently come under fire from the International Ice Hockey Federation (IIHF) for skipping out of the World Championships currently going on in Cologne, Germany. The Canadian media picked up on the story and caused a real shit storm coming to the defense of Sid the Kid. The IIHF has now responded by taking the article off the website and by publishing an apology to Sidney and his agent (article can be found at here).
The IIHF didn’t even take that big of a rip at Crosby. All they said was “Why is a 22-year-old Sidney Crosby tired when a 34-year-old Ryan Smyth is answering the bell for his country despite having represented Canada at the worlds already on eight occasions?”
I’m disappointed in the IIHF for crumbling under the pressure. At the Olympics and World Juniors we always hear players saying how big of an honor it is to wear the Red and White. Why is it that this honour of playing for one’s country doesn’t matter anymore when you have to play in the 2nd most important Ice hockey tournament? Players constantly use the excuse “I’m too tired after playing the entire season for my club team.” I would have believed this years ago when hockey players weren’t the finely tuned athletic specimens they are now. Us hockey fans aren’t stupid, just come out and be honest with us. We all know that NHL players are missing the World Championships for the following reasons.
1. They’re not getting paid for it.
2. They know that no one in North America is watching the tournament, so it won’t help increase the players profile to the average fan.
Alot of hockey fans will come to the defense of Crosby with the agruement “He won us the Olympic gold, he can do what ever the f*** he wants!” Remember, Crosby and all the top players in the World provided hockey fans with the best quality hockey we’ve ever seen, wouldn’t it be great if they did that annually at the World Championship instead of every four years?
VancityBuzz.com