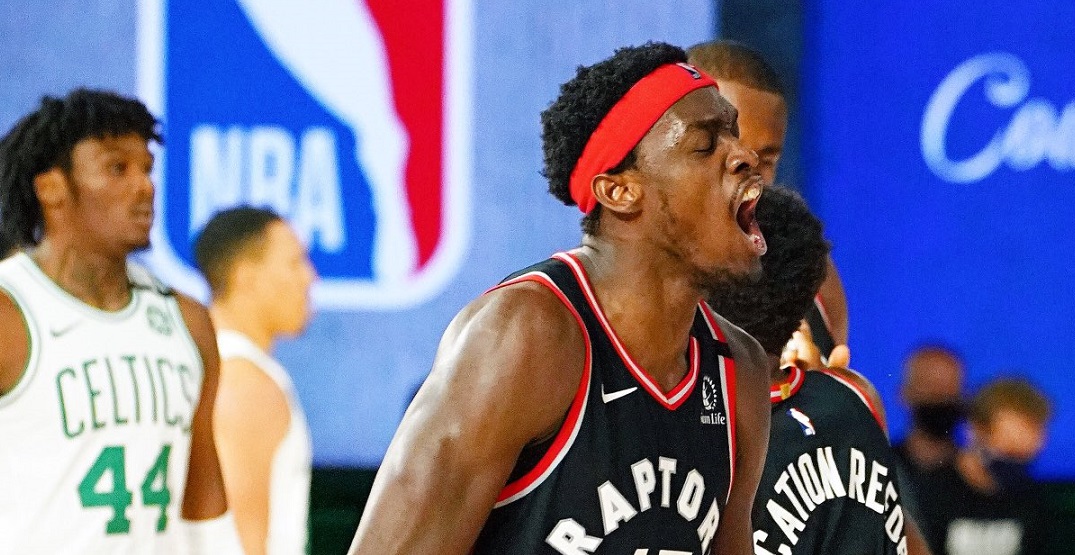 It’s no secret Pascal Siakam hasn’t been performing to the peak of his abilities throughout the 2020 postseason.

One of the Toronto Raptors’ key contributors down the stretch in last year’s championship run, the 26-year-old forward has been the subject of scrutiny about his ability to elevate the roster in the series against the Celtics.

In Toronto’s first three games against Boston, Siakam wasn’t able to create enough open looks and shot 5-for-13, 6-for-12, and 6-for-13 respectively from 2-point range. His repeated failed spin moves became the subject of many memes and jokes on social media, and as Toronto was behind 2-1 with multiple below-standard performances from Siakam, the questions start to creep in.

Was his production in last year’s postseason simply a byproduct of a well-constructed offence centred around Kawhi Leonard? Is Boston’s strong defence simply too much for him to handle as a #1 option on the offence?

Right now, the most important thing on Siakam’s mind shouldn’t be whether he’s good enough to topple Boston with a superstar performance. Simply, it should be whether he’s able to push the Raptors enough to get past Boston.

Siakam’s 23 points led the way for the Raptors in their crucial Game 4 victory to even up the series at two games apiece on Saturday night.

But looking at the larger picture, a few inferences can be made from Siakam’s first four games in the series.

Of course, sample sizes are a funny thing. You could argue that Siakam hitting the 20-point mark for the first time in Game 4 inflates some of his numbers and hides his rough start to the series, largely off of an 8-for-10 shooting performance on 2-pointers, including this fastbreak layup.

You could also point to his 2-for-13 three-point shooting in that same game and realize it’s likely an outlier, not a long-running trend. On the glass, Siakam’s rebounding numbers are identical to the regular season. As he said himself, he’s still finding ways to contribute.

It’s natural to expect more out of a player who put up 32 points in an NBA Finals Game 1 last season, and who clinched the title (including the team’s final field goal of the season) with a team-high 26 points in a closeout Game 6 against the Warriors.

He’s clearly more than capable of performing on the game’s biggest stage, but has yet to contribute a performance this postseason that’s really made anyone sing his praises.

From Siakam’s perspective, none of the sports talk show-style debates about his worth should really matter too much to him. Where he ranks among other forwards in the league, whether he’s better than his counterpart in Boston’s Jayson Tatum, or whether he’s worth the money — it all should be put aside for a player who’s more than earned his due in the NBA.

At this point, he’s signed the contract many players around the league can only hope for, inking a four-year max deal worth $130 million last offseason.

He’s earned the accolades, following up a 2018-19 recipient of the NBA’s Most Improved Player award with his first All-Star game nod this past season. He is very much expected to be the Raptors’ future and present.

Toronto avoided a championship hangover this season not by having anyone one player put up other-worldly numbers, but as part of a collective and relentless roster that won games in every way imaginable.

Siakam himself led the team in scoring, but his totals ranked 17th league-wide. Fantastic individually, but hardly the kind of mark you’d expect from a contender’s top offensive threat.

But no bother for the Raptors, as they still put up the league’s second-best record in the regular season and are two wins away from another conference final berth.

Siakam’s growth over four seasons since his selection by the Raptors as the 27th overall pick in 2016 has been anything but predictable. Picking up added responsibilities each year, Siakam’s already blown everybody’s expectations of him away.

With his entire career centred around proving people wrong, Siakam’s Raptors now have a very clear task in front of them.

And whether it’s Siakam averaging 30 points or 10 points over the remainder of the series, whether he’s finding the basket or shut down offensively, Toronto’s key to success has always been its depth.

Maybe Boston is Siakam’s kryptonite. They very well might be capable of holding him down for another few nights.

But Toronto’s shown all year they’re capable of winning in a multitude of ways, and are just two wins away from resetting anyone’s doubts about Siakam’s abilities once again.