Stockholm based indie band, Shout Out Louds killed it in their first Vancouver appearance in three years, at Venue, this past Monday, May 21.

The Swedish five-piece hit the stage to an audience packed with devoted fans whom you could tell were eagerly anticipating their return. Touring in support of their fourth album release, Optica, songs off the record comprised the better part of the set list, with the other songs equally split between Our Ill Wills, Work and their debut Howl Howl Gaff Gaff.

Shout Out Louds are one of those bands that undoubtedly sound great in studio however their live show is what really sells them. Having just celebrated their 10 year anniversary, it’s apparent, with their flawless transitions and ever so charming stage presence that they are seasoned performers.

Most of their songs are on the backbeat which makes them incredibly danceable and if that wasn’t already enough, the groups infectious energy and endearing dance moves worked their magic. Despite it being the last night of a long weekend the group managed to keep the crowd bouncing,dancing, singing and clapping throughout the entire set.

The atmosphere in the room was pure elation and high spirits through to the animated three song encore where the Shout Out Loud’s finished the set with Destroy, Walls and Tonight I Have to Leave It a favourite from their sophomore album Our Ill Wills.  As the band made their exit and the show-goers  filtered out it was clear with the happy chatter and exhilarated fan faces that the three year wait was worthwhile.

Check out Shout Out Louds on their official website  www.shoutoutlouds.com 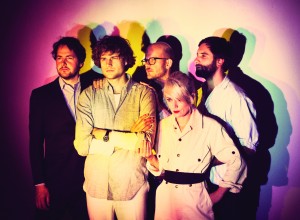