Let’s start this off with one caveat: anything can happen in the NHL.

Yes, that might seem like a “get out of jail free card” used by GMs and fans alike who stumble into success (or manage to avoid it, as it were).

But it’s true. Good luck, bad luck, the ever infamous “intangibles”, however you want to define it, things happen in the NHL that we can’t account for. It’s why people have made jobs out of trying to tell people they know what can happen in the future. If you are able to show a talent for recognizing future trends, that’s a huge commodity. It’s why “old school scouts” got jobs (“I played the game, I can recognize the signs of great talent!”) and why advanced stats guys are starting to get hired now (“I wrote an excel sheet formula, it can recognize the signs of great talent!”).

At the end of the day, though, we are still far removed from a future when we all get scanned with a barcode and get tossed into the NHL reject or accept pile before we ever even hit the ice with skates strapped to our feet.

To some, it’s a low impact transaction, and they truly don’t understand the reaction the trade garnered.

Canucks fan reaction on Twitter was largely negative. Those who didn’t like the trade, hated the trade. The reason there are such strong feelings, however, is more about what it represents.

Here is a quick breakdown of why people are a bit on edge about the trade: 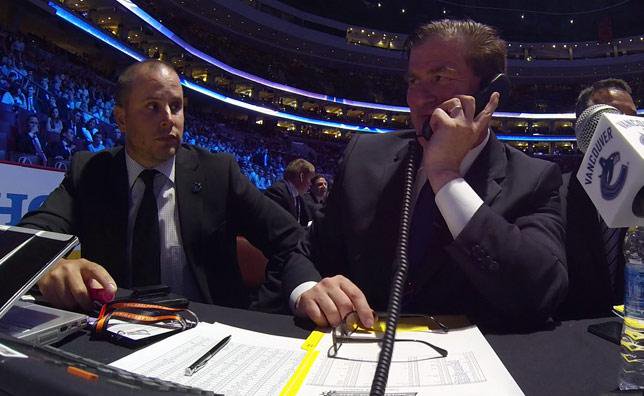 There are some silver linings if you want to look for them, though. Granlund did have an equivalent season to Shinkaruk during his AHL career at one point (46 points in 52 games in front of all 10 fans during the Abbotsford Heat days). Corey Pronman feels the Canucks came out with a slight win on the trade due to Granlund’s higher defensive awareness and ability to play different positions. Some people simply don’t like the chances of small scoring wingers making it in the NHL, and the rule of thumb is centre depth is greater than winger depth.

A lot of it comes down to, though, “would you roll the dice on a higher skill-set, riskier chance of making NHL” prospect in Shinkaruk, and “would you rather have higher roster maneuverability with an entry-level contract player” in Shinkaruk. On my end, I still feel like this is a trade that in no way needed to happen this season. The only reason you do this deal now is if you REALLY wanted Granlund (which doesn’t sound like it from the Canucks end) or if you REALLY think Shinkaruk is just a turd of a player.

I think yesterday’s reaction, if anything, mostly shows a lack of faith in management from many Canucks fans. In a day and age where stats are being recognized more and more, Benning’s “meat and potato” approach is met with many an arched eyebrow.

You have a management squad who claims they “looked at the WAY” Shinkaruk was scoring goals, and came away wondering if that would translate into the NHL, and are looking at underlying factors.

Which at face value, is great. They aren’t just looking at raw numbers, they are digging deeper to make sure this isn’t a Tom Sestito 42-goal situation. But this is also the same team that keeps playing Matt Bartkwoski, who has awful underlying numbers, and is only kind of good if you go based off of raw numbers. So it’s hard to tell what’s spin and what’s actual team philosophy. We end up hearing a lot more about “compete” and “scrum ability” than “great goal scorer” and “high end skill”, which is worrisome for people wanting a skilled team being iced.

Add in a losing season, with rumours of ownership being overly meddlesome, and a team whose direction is really hard to gauge, all taking place in a Canadian market?

You’re going to have some heated discussions about pretty much every decision made.

Again, Benning might be the smartest man in the room. Maybe his vaunted scouting background will pay off. Maybe he was dead on about about Shinkaruk being a flop and Granlund will end up being a player. Maybe it’s just overreactions from people heavily invested in the team.

It’s just going to take several years before we can figure that out. And in hockey mad Vancouver? That’s a lifetime.