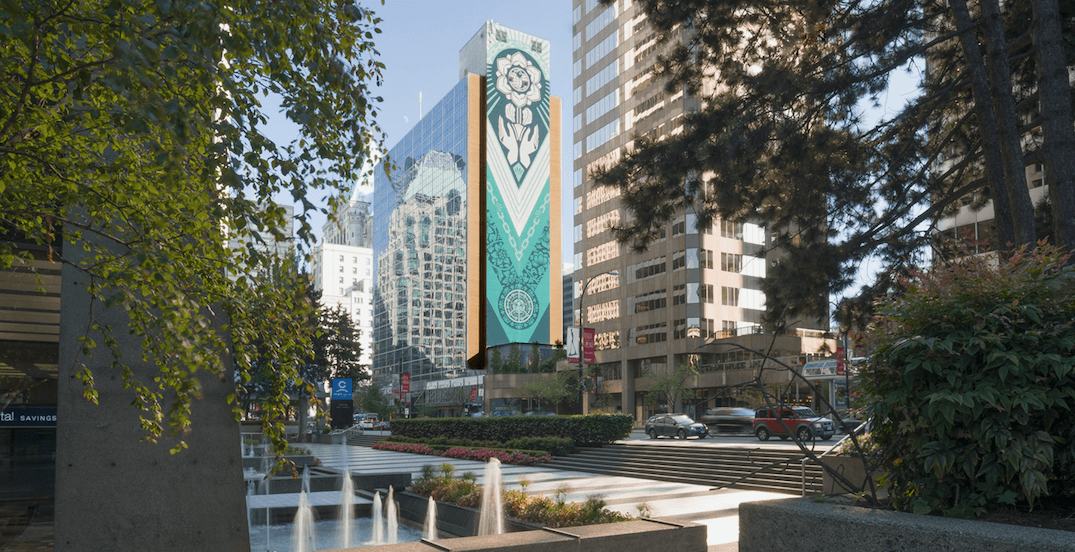 A 20-storey picture of earth’s environmental crisis in the form of a mural titled Earth Justice by renowned street artist Shepard Fairey is now visible high into the skies of downtown Vancouver.

The American graphic artist and social activist, best known for his 2008 portrait of then-presidential candidate Barack Obama titled “Hope,” just completed the mural with his crew of four on the side of a high-rise near the corner of West Georgia and Burrard streets. 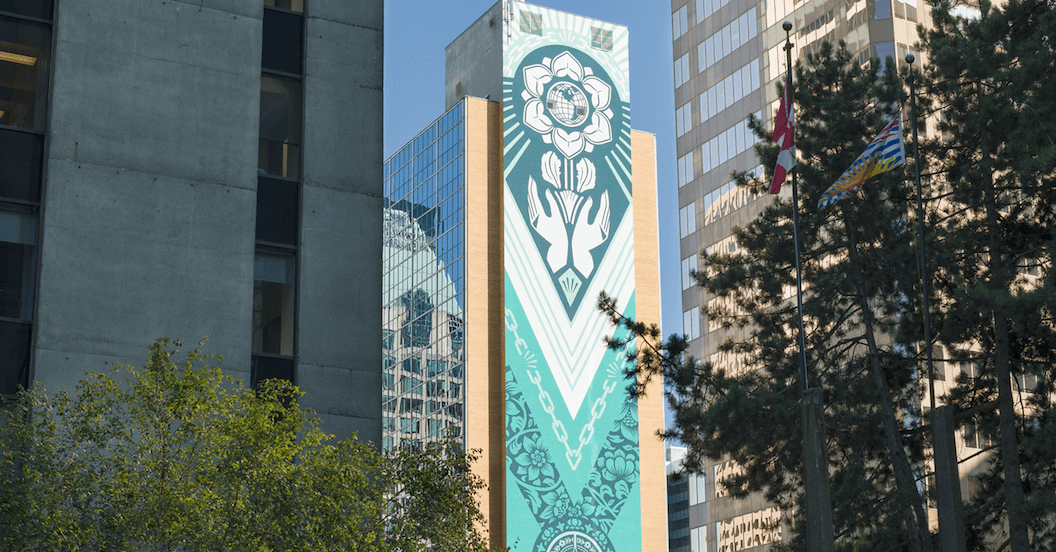 The Surface Series commission is presented in partnership with the Downtown Vancouver Business Improvement Association in collaboration with this year’s Vancouver Mural Festival.

Surface Series will feature prominent artists from around the world using a variety of mediums to spark social dialogue through contemporary art to improve the environment.

Earth Justice is part of Fairey’s Earth Crisis series, art centred on the story that our generation is facing an environmental crisis. 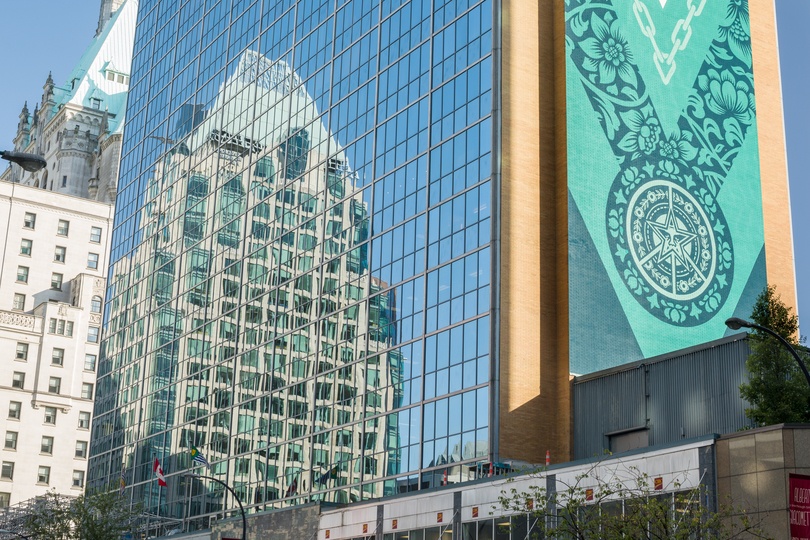 This is Fairey’s first mural in Vancouver. He told Daily Hive he chose the city because it’s a place with a lot of natural beauty and an environmentally-themed mural would be good a reminder to protect it.

Fairey said to create this mural, he looked at his “library of imagery,” after being given the dimensions to work with, “for example the hands and the flower are a derivation of something that I already made but then adding in the chains, the additional flower pattern, the very steep vertical V to work with that format — it’s just basically a design process of figuring out what is going to look ideal in the space.”

Fairey has painted nearly 100 public murals around the world, which include efforts to change the conversation around art and urban landscape.

I just finished my "Earth Justice" mural in Vancouver, which is a call to respect and nurture the planet with the understanding that our individual and collective actions dramatically impact current and future generations. The earth has a delicate balance of interdependent eco-systems, which cannot withstand the current volume of Carbon emissions, pollution, and environmental destruction. I included the breaking chains in this mural because if we are to move away from the path of destruction, we need to break free from the status quo of fossil fuels and other patterns of consumption that are unsustainable. True justice for the earth and future generations of all species can only be achieved by respecting the fragility of the eco-systems that sustain life. The future is in our hands, and our children's quality of life will largely depend on the example we set for them now. The good news is that the city of Vancouver, which supported this project, believes in greening and furthering all areas of environmental responsibility. I hope other cities follow Vancouver's lead! Thank you to Christian Chan, Matthew McMurry from @UltraVioletArts and the @BurrardArts Foundation for facilitating such an amazing wall for the mural. Thanks to my crew of Nic Bowers, Dan Flores, Rob Zagula, Luka Densmore, for their hard work on the wall. Also, thank you to Jon Furlong and Zane Meyer for their photo and video documentation respectively! Photo by @jonathanfurlong. -Shepard ⠀⠀⠀⠀⠀⠀⠀⠀⠀⁣ #FACINGTHEGIANT #OBEYGIANT30TH #vancouver #obey #obeygiant #shepardfairey

Earth Justice is one of the largest murals Fairey has created in the world.

“It’s really amazing — this mural where it’s a really prominent place in the city,” he said.

“To have an uninterrupted space that tall and that prominent is really special.”

“It’s almost becoming an architectural object, where a lot of my other murals, they feel a little bit more you know, like they’re adapting to something closer to street level that feels like a surface element on a structure that is with a lot of other things going on around it, distracting from it — this is, this space itself is very iconic so then the mural takes on that iconic nature,” which Fairey said he’s grateful for.

Fairey said protecting the environment is important because, “I care about other people, and I have kids, two girls, they’re 11 and 14, I care about their future, I care about the future for other people’s kids — I’m 49 years old, I’m probably going to be fine living out the rest of my life even with the effects of climate change, I’ll be okay, but I care about future generations.”

Day 5 in #Vancouver!⁠ ⠀⠀⠀⠀⠀⠀⠀⠀⠀⁣⠀⁣⠀⠀⠀⁠⠀⁠⠀⁠⠀⁠⠀⁠ The amazing thing about creating big murals is that they interact with the entire city, and can change the entire cityscape. People can encounter art in their daily lives without stepping into a gallery or museum.⁠ ⠀⠀⠀⠀⠀⠀⠀⠀⠀⁣⠀⁣⠀⠀⠀⁠⠀⁠⠀⁠⠀⁠⠀⁠ My team and I have been working on this "Earth Justice" mural all week, which is meant to spread the message of treating the Earth gently and being an Earth champion. I'm looking forward to sharing the final shots with you once it's complete. If you're in the area, join us tomorrow for the opening reception of "Facing the Giant: Three Decades of Dissent" with @burrardarts. August 8th from 7pm – 11pm at BAF Gallery, 258 East 1st Avenue. Visit the link in bio for more details. Thanks for caring!⁠ – Shepard⁠ ⠀⠀⠀⠀⠀⠀⠀⠀⠀⁣⠀⁣⠀⠀⠀⁠⠀⁠⠀⁠⠀⁠⠀⁠ #FACINGTHEGIANT #Vancouver #obey #obeygiant #shepardfairey #30thanniversary⁠ 📷: @jonathanfurlong

“I think other people should feel the same way, I mean there’s so many things we do subconsciously as a species to ensure that we can continue to, you know, perpetuate, and yet we’re being idiots about this,” he said.

“It’s amazing that environmental responsibility seems like a priority and a big part of the culture of Vancouver and I think that Vancouver can be, you know, a role model city, it can be a leader and anyone who hasn’t thought much about how unique a situation that is, to have the right culture on that issue should really take a second to ponder and appreciate it and help to keep that spirit moving forward and well supported,” Fairey said.

Up close view of the new 20-storey mural titled “Earth Justice” by @OBEYGIANT from the third floor of the Burrard Building on W. Georgia #Vancouver @DailyHiveVan pic.twitter.com/YZxb4X3pZ2

The launch of Earth Justice coincides with an art exhibition at Burrard Arts Foundation, Facing The Giant: 3 Decades of dissent, featuring Shepard’s work and celebrating the 30th anniversary of the OBEY GIANT art campaign.

The Facing the Giant series will feature 30 — 30 x 41-inch prints on collaged backgrounds, as well as newer work. The art exhibition will run from August 8th to September 28th. 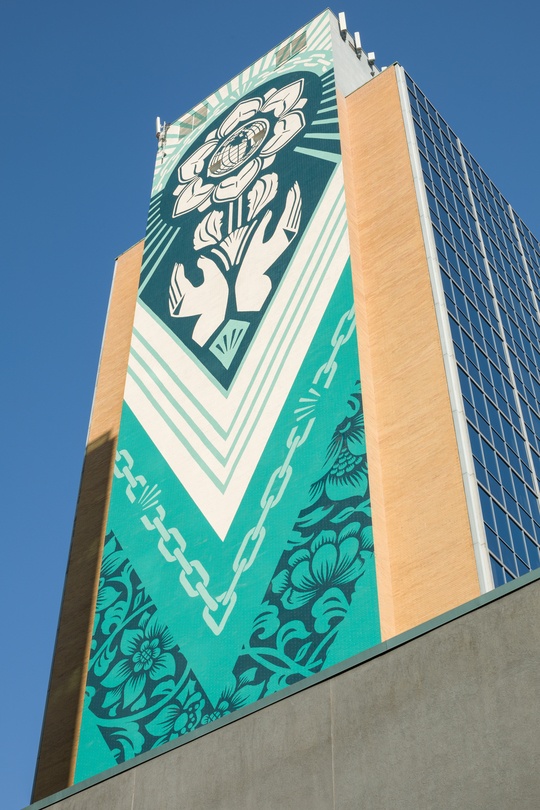