Honey, she’s home! Fresh from a residency in Vegas, Shania Twain is bringing her Rock This Country tour to Vancouver on June 7 and 9, and will hopefully rock a sequined unitard or two in the process. Demand for tickets is incredibly high; so high that Shania added an additional 19 cities to the tour after several dates sold out in minutes.

The country superstar promises she’ll hang up her touring hat for good once this trek is finished. But before she graces Vancouver with her awesome presence, we’re bringing you a sneak peek at the setlist along with five random facts about Shania that you might want to know before Sunday’s show. Nothing important – just useless trivia to impress your friends and annoy your co-workers with. Ready? 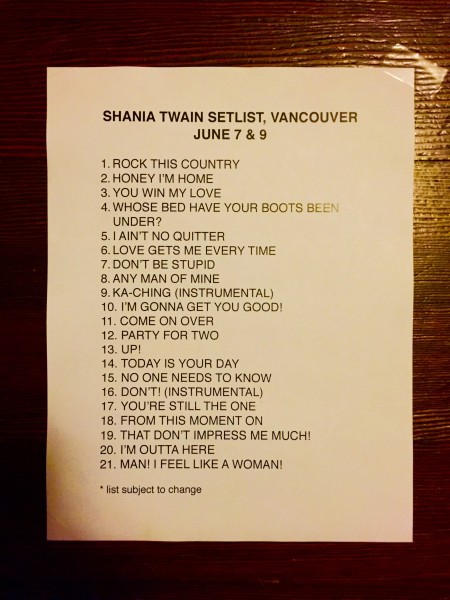 1. Rocket scientists are in fact impressed much by Shania Twain 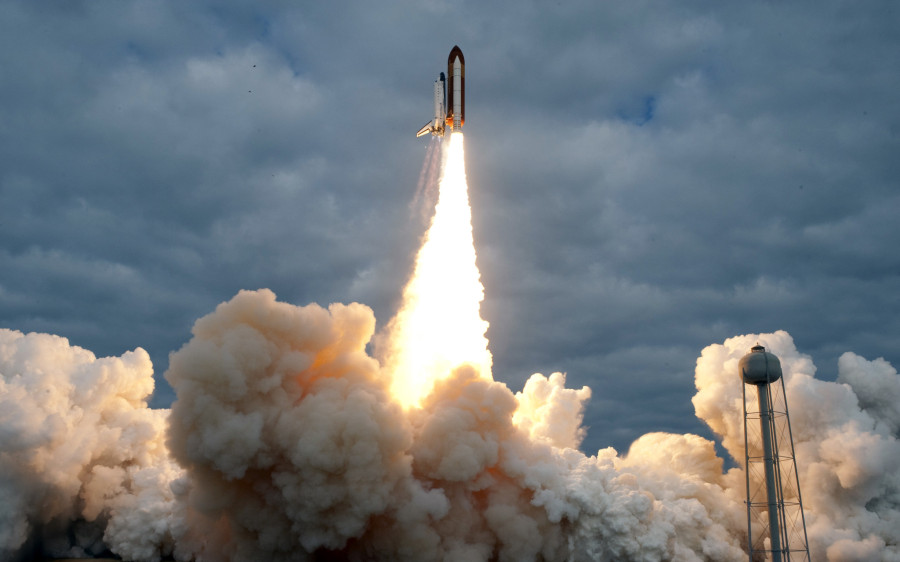 Shania recited a laundry list of things she didn’t like on her 1998 smash “That Don’t Impress Me Much.” Pocket mirrors, car kissers and even Brad Pitt made the list (more on him later), and so did rocket scientists. They might not do anything for the country singer, but the feeling isn’t exactly mutual. According to NASA’s official website, musical wake-up calls for flight crews are a long-standing tradition of their program, and in 2007, Mission Control Center used Twain’s 2003 hit “Up!” to wake the astronauts aboard the Space Shuttle Endeavour.

Other spacey songs used to wake the Endeavour’s crew during their two week mission included John Mayer’s “Gravity” and “Learn To Fly” by the Foo Fighters.

2. No one is impressed much by Timmins 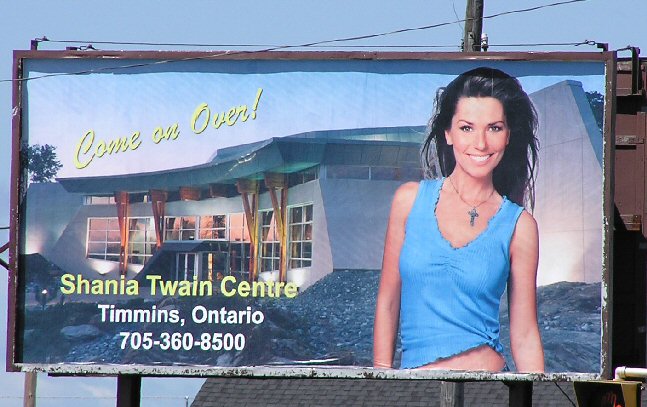 Shania Twain proudly calls Timmins, Ontario home, but folks in her hometown weren’t thrilled with the Shania Twain Centre erected in the singer’s honour in 2001. The $10 million dollar tourist trap, paid for in part by taxpayers’ money, featured gold sequined costumes alongside gold-mining artifacts, but fans failed to come on over to the tiny town of 43,000 for a looksee.

“The old adage ‘built it and they will come’? Forget it. If you build it, you better be prepared to market,” said Guy Lamarche, the city’s tourism manager.

The building was torn down in 2013, and the city announced plans to display the Centre’s Twain memorabilia in libraries, in the airport and even on street corners. No word as to which of the country singer’s dresses will have the dubious distinction of working the corner of Timmins’ main drive.

3. Shania is not impressed much by other divas 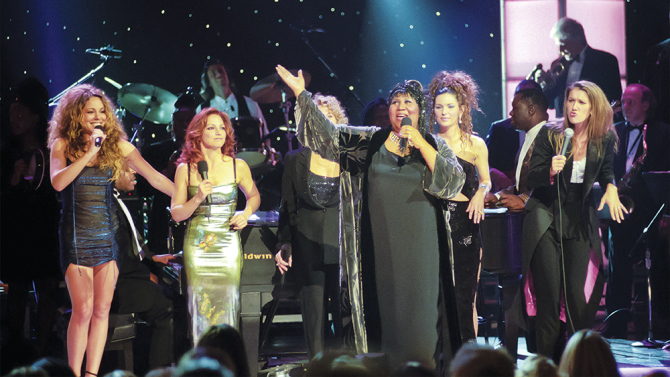 Shania appeared on Watch What Happens: Live! earlier this year and played a game called “Plead The Fifth” with host Andy Cohen. The Grammy-winner was asked three questions but was warned that she could only refuse to answer one.

Cohen first asked how much money she earned from her ginormous Come On Over album and after some hmmm’ing and hawing, she revealed she’d made a cool $20 million from the project. Next, she was asked which participant in 1998’s VH1 Divas Live concert was the most challenging to work with. After more hmmm’ing and hawing, Shania pled the fifth to try her luck with the last question. Bad move – Cohen then asked Shania what she’d say if she were to bump into the former best friend who allegedly ran off with the singer’s husband. No hmmm’ing and hawing here – she smiled, looked straight into the camera and said, “I wish I’d never met you.” Awesome response, but it kinda makes you wonder what she’d say if she were to bump into one of those mean ol’ VH1 divas today. 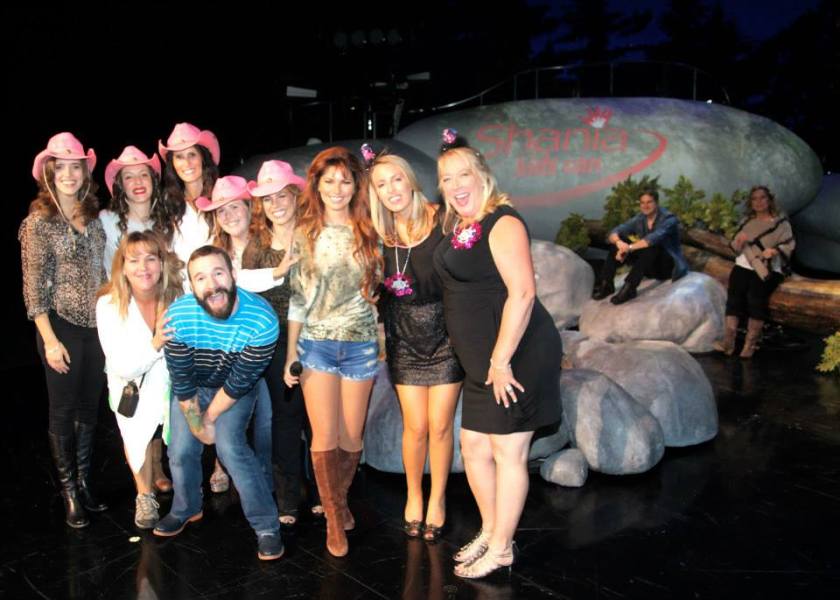 Shania’s recent Las Vegas residency was a huge success and was full of surprises, especially for fans of b4-4, Canada’s answer to the boyband craze of the early 2000s – kind of like N*Sync but without the catchy songs. The trio (I hesitate to use the word “band”) released one album, lost a Juno to Nickelback and quietly disbanded (there, there’s “band”) in 2003.

I’d completely forgotten about them until a few years ago when I found myself in Vegas with my pal Dewey at Shania’s concert. About halfway through, Dewey leaned over and said “look! The background singers are two of the three guys from b4-4!” But before I could tell him to knock it off with the number puns, I was pulled onstage by Shania for a scripted bit in the show where a few lucky audience members get to participate in a hoedown with the star. I managed to get a good look at the backup crew and Dewey was right – it was brothers Ryan and Dan Kowarsky of b4-4, all grown up.

I then sat down with Shania, her band and a gaggle of moms in pink cowboy hats to sing a medley of hits around a fake campfire. I was close enough to see that the lyrics of each song had been taped to the fake rocks around the fire; the Kowarsky brothers needed the help but I certainly didn’t.

5. Lots of songwriters are impressed much by Brad Pitt

Okay back to “That Don’t Impress Me Much” for a minute. In the song, Shania is looking for a guy with the brains, the looks AND the touch, and apparently Brad Pitt’s moves aren’t quite up to snuff. Last year, Entertainment Weekly asked the actor if he’d ever heard her song and he replied, “Unfortunately, yeah.”

When asked if he would’ve rather been mentioned in a heavy metal song instead, Pitt laughed and said, “Yeah, precisely.” The Oscar-winner has been name-checked in a number of songs over the years, including hits by Taylor Swift, Jay Z and Bruno Mars. One of the pitfalls of being super famous and having a last name that rhymes with “s—“, I guess.

A few tickets are still available for both of Shania’s shows at Rogers Arena and as you can tell by our setlist preview, the Rock This Country tour promises to be an epic night. Don’t be stupid – get your tickets now.