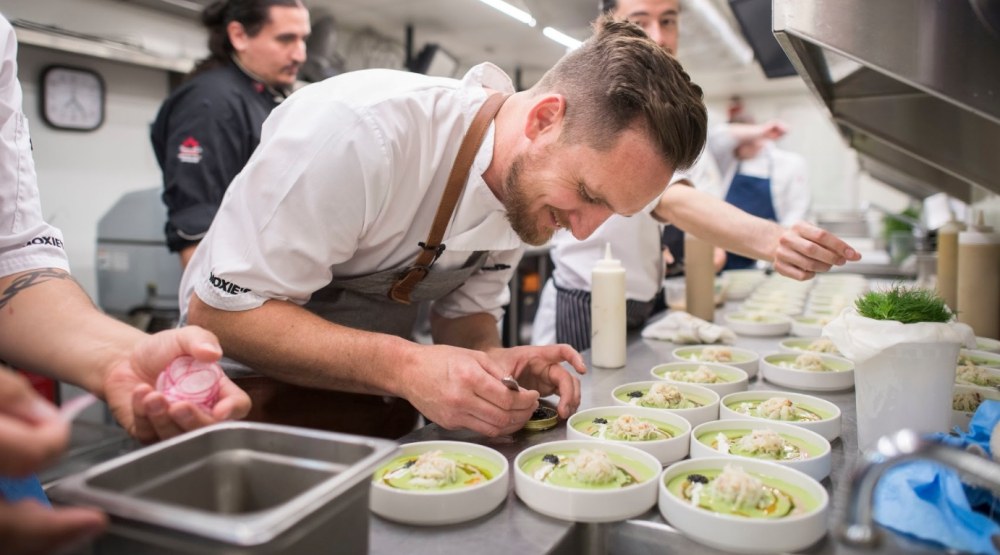 A stream of Canadian chefs have been cooking up a storm at James Beard House in New York City on a near-monthly basis this year.

With Canada’s sesquicentennial just past and the whole country aglow in the international limelight, it has been a good year for all things Canadiana, and the culinary scene is no exception.

At the table in the prestigious Greenwich Village townhouse-turned-bastion of fine dining, surrounded by publicists and editors from across the US, everyone is talking about their token trips north: from meet the in-laws and taking ski trips, to sourcing celebrity diets during TIFF.

There’s talk of poutine, apparently quite chic on menus in America right now – though there’s some dispute that Disco Fries are the same thing.

And while there’s no poutine on the all-Canadian menu from Chef Brandon Thordarson being served tonight, at first read, the line-up of canned tuna and ’Shake & Bake’ chicken might not do anything to dispel the notion that Canadians are all about quaint, low-brow classics.

It also makes what follows all the more surprising.

A chilled asparagus soup with luscious Dungeness crab, lobster cream and caviar to start, followed by ‘canned’ tuna salad, inspired by Nicoise, only more like a conserva accompanied by a pickled egg, a deep fried anchovy-stuffed olive, and tomato confit over edible sand.

Next, ‘Shake & Bake chicken,’ a dish I know well and despised throughout my childhood, but one that Thordarson obviously relished and attributes fondly to his mom. Here it’s elevated with a technical prowess that entirely contradicts its purpose as a convenience food.

The seasoned coating is all too familiar, but the chicken itself, a delicate roulade of deboned poultry, sous vide and then fried is persuasively good. Classic accompaniments; baby veg, pea and potato purées, a velvety chicken glacé, and a luscious slab of foie gras are all welcome upgrades on the meat and potato meals that myself and my fellow Canadians grew up eating.

Dry aged striploin is next. A morsel of Angus beef with a deep pink centre and seared exterior that’s served with braised shallots, pressed potatoes, and wilted greens. 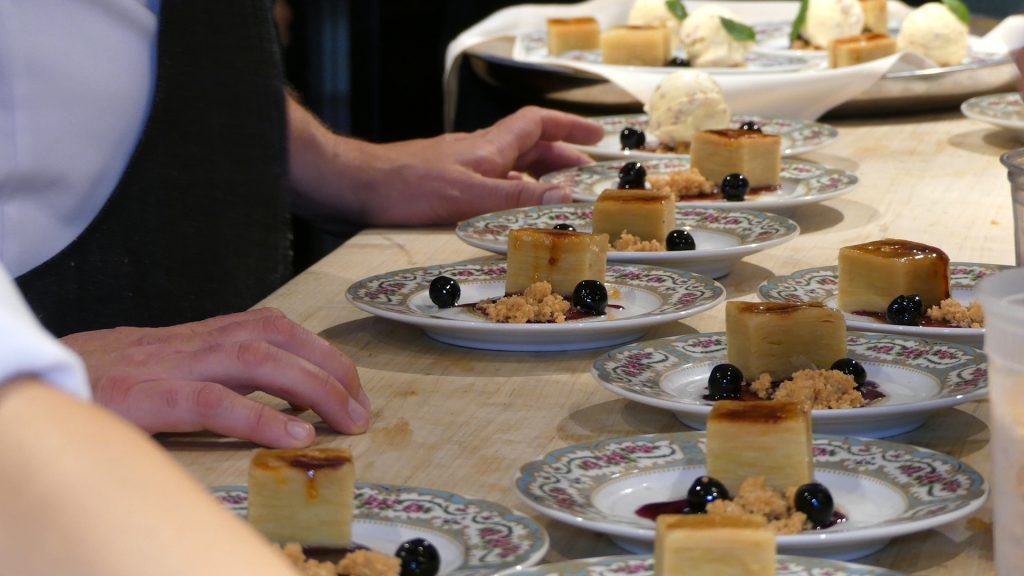 For dessert, a roasted apple flan with hazelnut pralines, and maple-bacon ice cream – a combination of flavours I’d consider to be commonplace across Canada but amusingly, very novel to our neighbours in the south.

It isn’t until some days after the dinner, in a follow-up interview with Thordarson, that I learn the origin story behind serving a menu inspired by suburban Ontario moms of the ’80s and ’90s to a sold-out James Beard dining room.

Thordarson is the head chef of Moxies, a chain originating in Calgary and successfully expanded from coast to coast. The brand has also recently debuted in Dallas, Texas, marking its first foray into the US market.

The chef has been with the company for just over five years now and is well attuned to cooking for Canadians, but he’s also worked his way around the world at high-end restaurants, hotels, and golf clubs in Canada, Australia, and the Scottish highlands.

When asked how his current role cooking for all of Canada had informed the menu he designed for James Beard, Thordarson shares:

At first, when I started to create dishes, I went down two paths and the first path was; What would a high-end chef do in a Michelin star restaurant or in the highest end restaurant in Canada, and what would he do at James Beard house?

So I created dishes with duck and foie’, duck confit, venision, and wild game, and I went down that road on a menu and got some really great dishes–I showed them to some my peers and we loved them.

And then on a parallel path, I asked, what would Brandon want to do if Brandon was asked to cook food as a Canadian boy using Canadian ingredients with my Canadian upbringing and world training?

And I went down that path at the same time; I created similar but different dishes using similar but different ingredients and when we got to the end of tasting all the food… it was [those] dishes that beat out the cheffy dishes and the main reason was that they’re all using Canadian ingredients, they all looked and tasted great and were all gorgeous, but it was almost too obvious… boring… predictable…

He goes on to explain that he finally settled on the fun, approachable menu as a way to showcase his personality, food, and Canadian upbringing. “The haughty-taughty food was some of that, but it wasn’t really me or my childhood as a Canadian kid.”

The final dishes may have been simply titled and unabashedly rooted in low-brow comforts but left no doubt that each was technically difficult and skillfully executed.

As a representation of Canadian cuisine, the dinner did as intended, showing off the top talent, skill, and products coming out of our country. But, more than that, it reinforced every other stereotype in the book: Canadians are hilarious… and wholesome… and hospitable.

Because really, who else could, or would, serve Shake & Bake to the James Beard House?

No filter. We at the @beardfoundation tonight.

Travel, accommodation, and meals were made possible by Moxies. All thoughts and opinions expressed are those of the author.