If you like a good mix of romance and survivalism in your movies, then you’ll probably dig the film Adrift.

It seems like over the last few years we have seen a few of these humans vs. the elements survival films. Ryan Reynolds was Buried, Sandra Bullock was floating in space in Gravity, and recently we saw Blake Lively trying not to get munched on by a shark in The Shallows. Now Shailene Woodley and Sam Claflin get a crack at it in a true story about a couple who have to survive at sea. 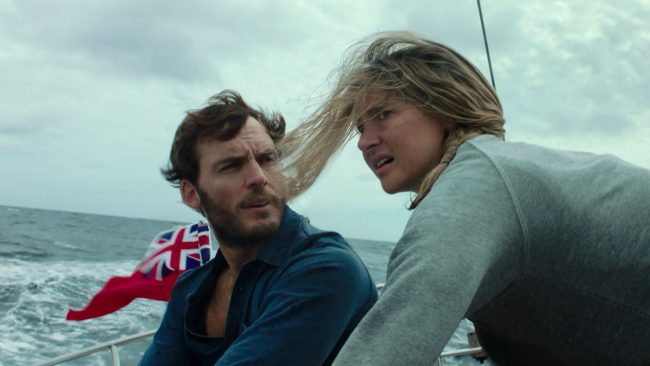 Adrift will remind you of the Robert Redford film All is Lost. The difference is director Baltasar Kormákur’s Adrift adds a bit of romance to it all, which allows the movie to pull at a variety of heartstrings.

This true story centers on world-traveler Tami Oldham who moves from place-to-place never knowing where she will end up. (kudos to the movie title’s double meaning)

One day, Tami meets an older man named Richard who just so happens to sail. They fall madly in love with each other and plan to spend their lives sailing around the globe.

When Richard gets a job to sail a wealthy family’s boat from Tahiti to California (over 4,000 miles across the Pacific Ocean), he decides to bring Tami with him on a romantic getaway on the open sea. However, what they don’t anticipate is sailing directly into a class 5 hurricane, one of the biggest in recorded history.

In the aftermath of the storm, Tami awakens to find Richard badly injured and their boat in ruins. With no hope of rescue, Tami must now find the strength and determination to save herself and the only man she has ever loved.

This movie was a pleasant surprise.

Going into this film, I thought it would be nothing more than pure cheese. A lot of times these types of movies don’t work unless the central character can carry the film. There is only so much “shipwreck” an audience can handle. Spending 90 minutes watching people float around isn’t riveting entertainment.

Golden Globe nominee Shailene Woodley (The Fault in our Stars) gives a career-defining performance as Tami and it’s the biggest reason this film works on so many different levels. Both Woodley and Claflin’s likeability and chemistry on screen keep this movie afloat.

The film is only 90 minutes in length, and although our romantic couple is marooned at sea, Kormákur breaks up the scenes of them being adrift with flashbacks of their courtship. So as you are seeing them deteriorate you also get to know their backstory which makes for subtle shifts in tension.

The cinematography by Academy Award winner Robert Richardson is also excellent. The images on display throughout are so skillfully crafted that your eyes can’t help but drink it all in. They use actual locations throughout the film which adds to the authenticity of the story.

Sure the film seems a bit choppy when it goes back in forth in time, but it’s not enough that it takes you out of the film.

Overall this is a great date flick that is mostly carried by Woodley. In some ways, it’s surprising to see this film not being pushed hard by the studio to get a bigger audience. Let’s hope that maybe Woodley’s performance has some staying power because the film is solid and her performance is worth some early awards chatter.

Giving this a 3.5 out of 5. It’s definitely worth checking out.

Playing at a theatre near you. Rated PG-13 (for injury images, peril, language, brief drug use, partial nudity and thematic elements), 90 minutes in length.