A paralympic skier is taking a robotic arm prosthesis being developed at Simon Fraser University to the Cybathlon in October – the world’s first ever cyborg Olympics.

Danny Letain, a former locomotive engineer, lost his left arm below the elbow 35 years ago and was using a body-powered prosthesis with a pincer-like split hook – a tiring process.

But now he’s working with SFU researchers to design a new system for controlling one of the world’s most advanced bionic hands – and it’s changed everything.

“With this new system, it feels like I’m opening and closing my hand,” said Letain in a release. “The most exciting moment for me was feeling my left index finger and the little finger for the first time since my accident.

“With the hook you don’t use those muscles at all. This system puts my mind to work in a whole new way.” 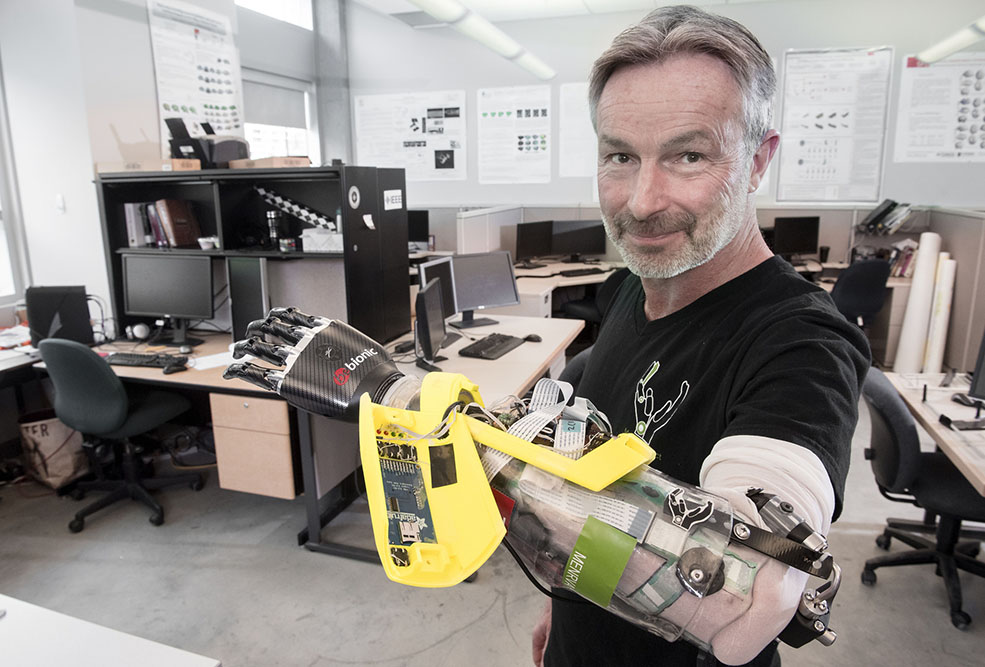 The new control system consists of an armband of pressure sensors embedded in the prosthetic socket, which track movements in Letain’s muscles as he carries out intuitive actions, like grasping a bottle.

Computer algorithms then map the sensor data to decode his intentions and move the hand  – and the more data you give it, the more it will learn.

The new system will be put to the test in October, at the first ever Cybathlon in Zurich, Switzerland, an international competition for people with disabilities using robotics.

Although he’s known as a paralympic skier, Letain will be using the “bionic hand” in an obstacle course to perform everyday tasks such as slicing bread and opening jars.

Organizers hope the “cyborg Olympics” will drive innovation that could be of use outside the competition and allow people with disabilities to get their independence back.

The SFU team is the only Canadian team taking part in the Cybathlon, alongside 80 teams from more than 30 countries.