A man is recovering after he was beaten when he tried to stop three men from sexually harassing women on SkyTrain.

Last Thursday, the men boarded a train at Sperling Station and called out to a woman, saying they were going to follow her home. One of the men then sat beside another woman and joked to his two friends about raping her.

A man witnessing this decided to try and intervene, telling him to leave the woman alone. The man allegedly uttering the rape threats then began swearing at the intervener, saying he was going to follow him off the train.

When the intervener got off the train at Lougheed Station, two of the three suspects got off the train, punched him in his face and upper body, and got back on the train. The victim got on a separate car and pushed the yellow emergency strip.

The three men then got off the train again and one of them punched the man in the face before all of the suspects ran off.

Despite Transit Police searching the area, the suspects got away.

The suspects are described as follows:

Police have provided images captured from CCTV on the platform to help the public identify these men. If you know who they are, contact Transit Police at 604-515-8300 or text at 87 77 77. 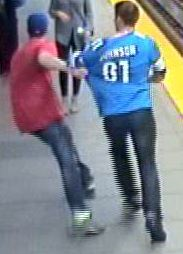 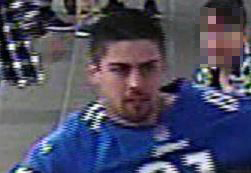 To discretely report a non-emergency incident on Metro Vancouver’s public transit system, you can text message Transit Police dispatch at 87-77-77 or download theTransit Police OnDuty App for both iOS and Android. All messages are received by dispatchers around the clock.

Additionally, passengers can also press on the silent alarm buttons located on each car – the long yellow strip along the length of each side window. This will send an alert to the control room, and a SkyTrain attendant or Transit Police officer will be immediately deployed to the car.