When applying for the first round of the #TigerbloodIntern position with Charlie Sheen this summer, Sepy Bazzazi had to finish the following sentence in 75 characters or less; “I’d be a good Social Media Intern because…”. At this point, Sepy didn’t know what to think. “I kind of took it with a grain of salt, and didn’t really know if it was even real. I had no expectation at this point, but I thought it was a pretty cool concept.”, he commented.
Sepy is a 25 year old Vancouverite who works professionally in Social Media for Earls Restaurants’ Corporate HQ (@earlsrestaurant). He is now one of the few Canadian candidates still remaining in the #TigerbloodIntern competition.

“Once I made it to the third round, I posted a screenshot of my acceptance email on my Facebook, and my friends began to comment letting me know that they hadn’t made it. Shortly after I found out that by round three, the race had boiled down to only 250 applicants from an initial 70,000+. This is when I realized that I potentially had a shot at taking this all the way, and decided to get really serious.” said Sepy. For round three, he was asked to submit a two minute video, responding to one of three social media questions. You can find his round three Video Response here: http://youtu.be/UfKylJyqmUo 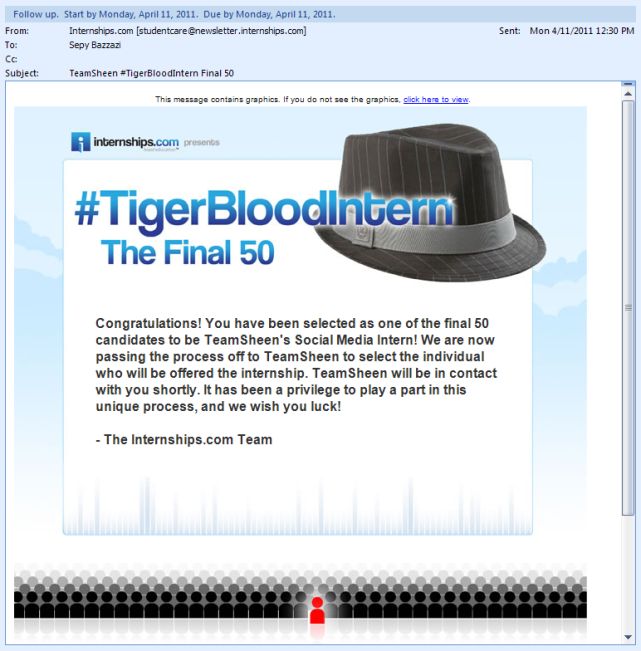 Yesterday afternoon at exactly 12:30 PM, Sepy received the email from Internships.com, informing him that his video submission for round three had earned him a position in the final 50 running for this social media Internship with The Warlock himself, Charlie Sheen (@CharlieSheen).
At this stage in the competition, the submissions will be reviewed by Charlie Sheen and his team personally. They will then be hand picking ONE lucky intern to fly down to Los Angeles for eight weeks this summer to fulfill the job of #TigerbloodIntern! Let’s wish our fellow Vancouverite good luck, and follow his progress on his dedicated blog: http://www.sepyhastigerblood.com.