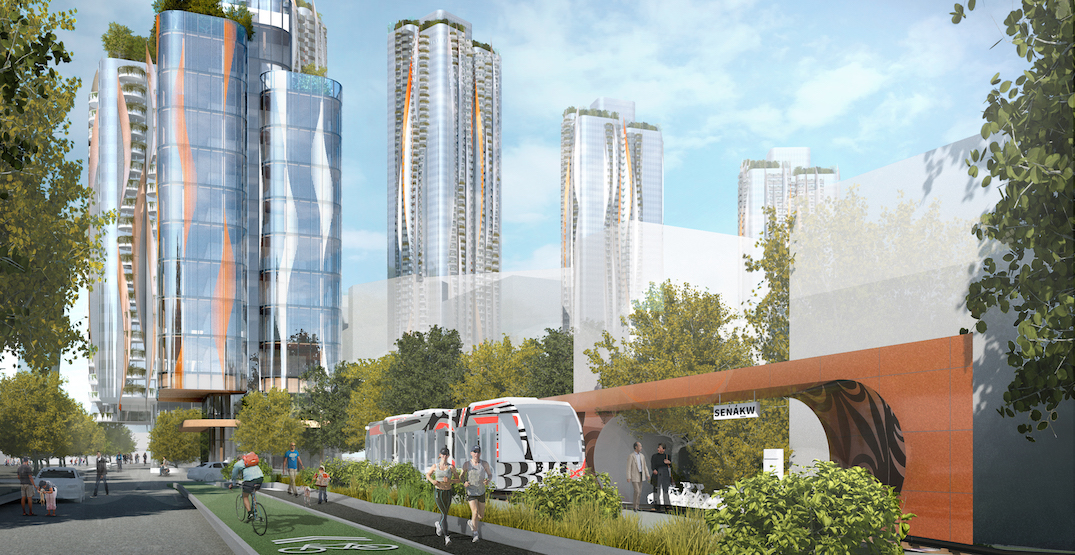 The landmark services agreement between the Squamish First Nation and the City of Vancouver for accommodating the needs of the on-reserve Senakw development brings to light new intricate details on the project and its public benefits.

First Nation-municipal service agreements are typically mundane, outlining how municipal governments will provide utilities (water and sewage) and road connections, and policing and fire rescue services. These unique agreements are necessary, as reserves are not under municipal jurisdiction.

However, the 120-year service agreement for the Senakw project — located on the 10.5-acre reserve at the south end of the Burrard Street Bridge — goes far beyond the basics. The 250-page agreement was signed in May 2022, but it was not publicized until recently.

Senakw will align with some City of Vancouver policies

As the project is being built on reserve, the First Nation is technically not required to follow City regulations, policies, and standards, nor does it need to follow the City’s development application process and seek the City’s approval. However, the agreement stipulates the First Nation has offered to provide “direct public contributions or commitments to practices aligned with City policies.”

It is stipulated in the binding agreement that all buildings will be required to meet or exceed the BC Energy Step’s code level 3 of green building design, along with a range of other energy and water-based sustainability measures.

At least one building with a floor area of 45,000 sq ft in the second phase of the redevelopment will be built as a hybrid mass timber structure. This is believed to be a reference to the 12-storey office tower at the eastern end of the reserve.

Senakw is required to provide “extensive public art” throughout the redevelopment at a “level and spending at least the same amount of money as is generally consistent with the City’s public art policy for rezoned developments.” 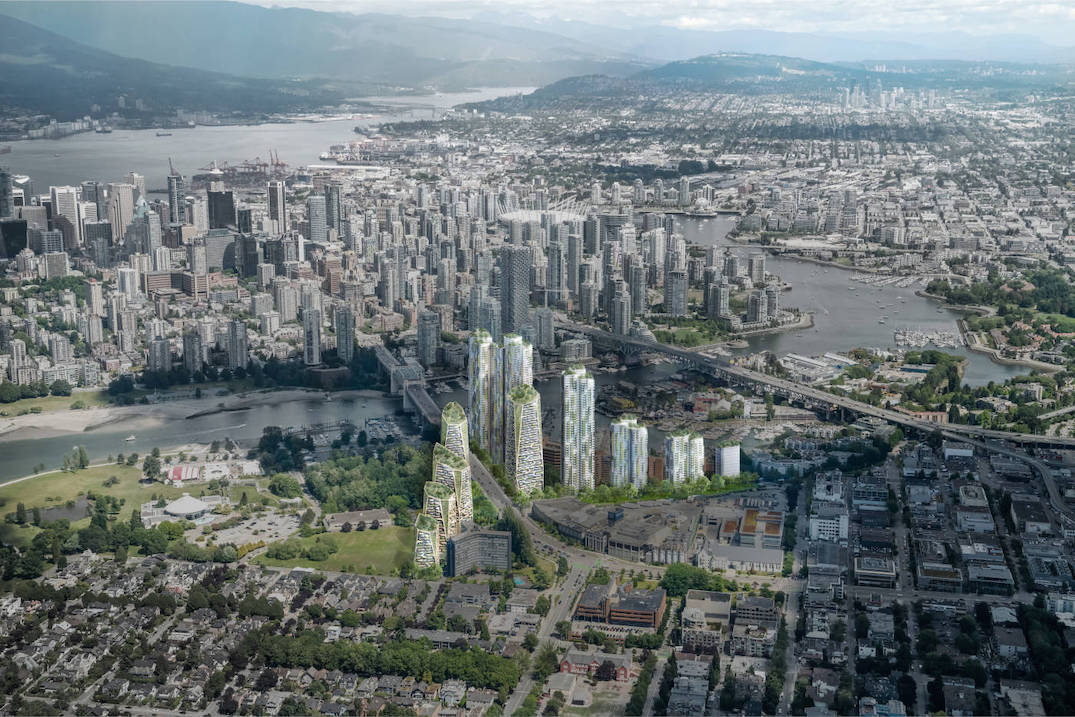 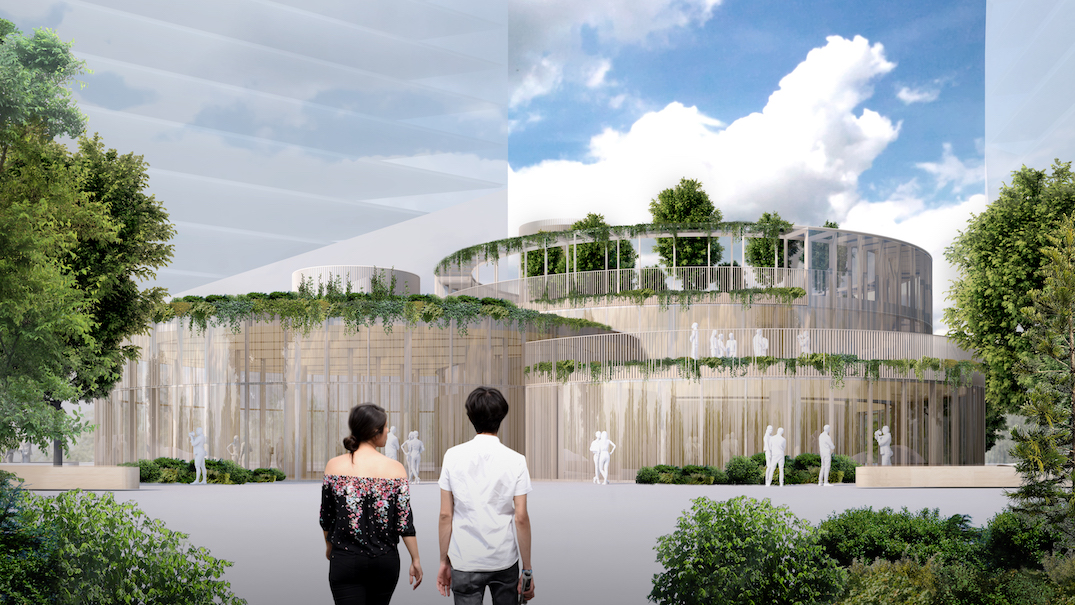 The agreement anticipates Senakw will be constructed in four separate phases, with each phase achieving roughly the same number of residential units.

All 6,080 homes in the project will be rentals, with the vast majority designated as market rentals. About 20% of the units in each phase will be deemed affordable — rents below or at average market rents, and rents no higher than 30% of the median total income. Altogether, Senakw will generate 1,215 affordable homes. Based on the agreement’s details, leasehold strata is no longer being considered as one of the housing tenure components.

The first phase is a parcel with three towers on the west side of the Burrard Street Bridge, containing 1,411 rental homes including 282 affordable units.

The second phase is the easternmost parcel of the reserve, where four towers will be built including the office building. There will be 1,570 rental homes, including 314 affordable units. A childcare facility for up to 75 kids will be incorporated into this phase.

The third phase is the centre parcel immediately east of the bridge. This parcel entails two towers, including the project’s tallest tower reaching 564 ft with 59 storeys. There will be 1,597 rental homes, including 319 affordable units.

The fourth and final phase is a small parcel closest to the water, with two buildings containing 1,502 homes including 300 affordable units. 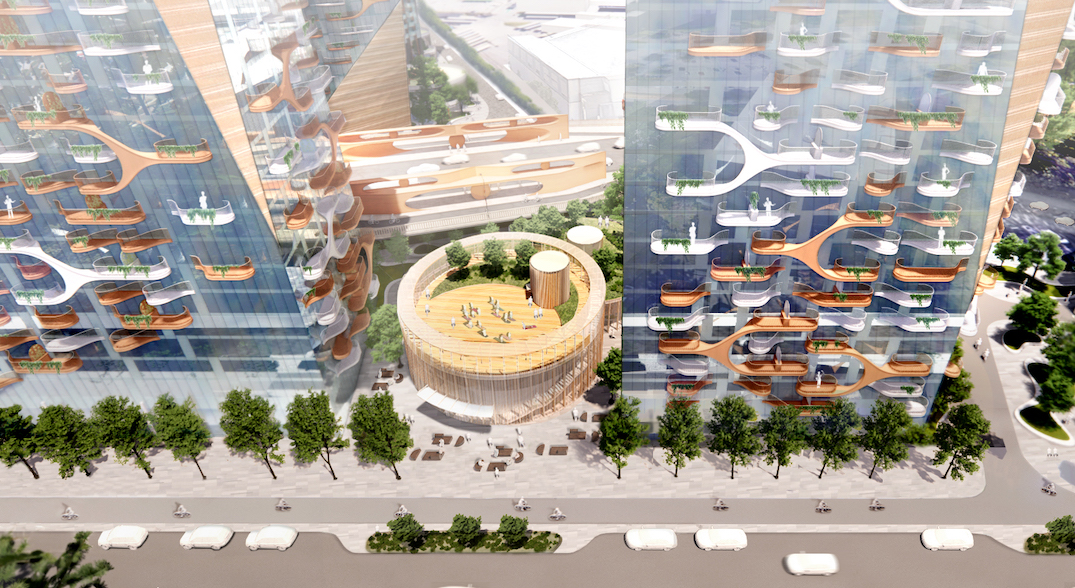 Artistic rendering of the first phase of Senakw on the west side of the Burrard Bridge. (Revery Architecture/Westbank/Squamish Nation) 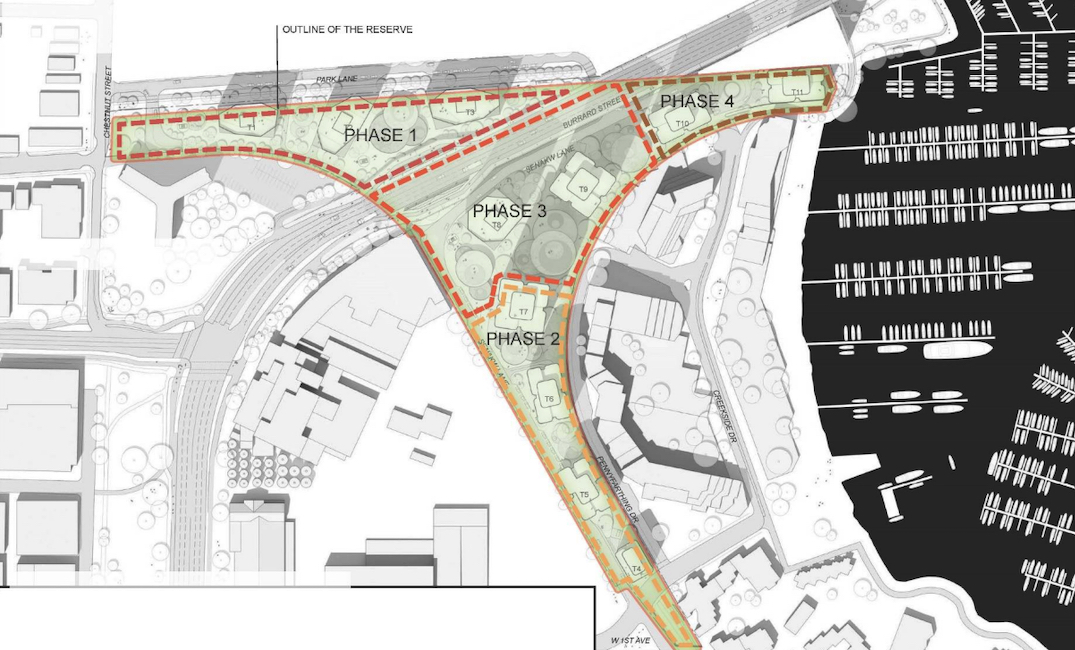 Senakw’s total residential floor area will reach 3.8 million sq ft, while the total floor area for office, grocery store, and retail and restaurant spaces will reach 171,000 sq ft, including a district energy plant. A total of 11 towers will be built.

Six acres, over half of Senakw’s land area, will be dedicated as publicly accessible spaces, including green spaces, parks, and plazas surrounding the buildings, and the activation of the space underneath the bridge for recreation and sports.

With a total floor area of about four million sq ft and an on-site population of up to 9,000 people upon full buildout, transportation management is a front and centre consideration in the agreement.

Extensive transportation management measures are being pursued, especially with Senakw providing only 886 vehicle parking stalls for the entire project — a small fraction of what would typically be expected for a project of this size and the various uses.

Some of this is mitigated through Senakw’s secured bike parking totalling 4,477 spaces.

To better ensure the on-site bike parking investments see real utility, the First Nation will provide at least $43 million for off-site City road upgrades with new walking, cycling, and vehicle infrastructure. The First Nation will fund almost all of these costs. 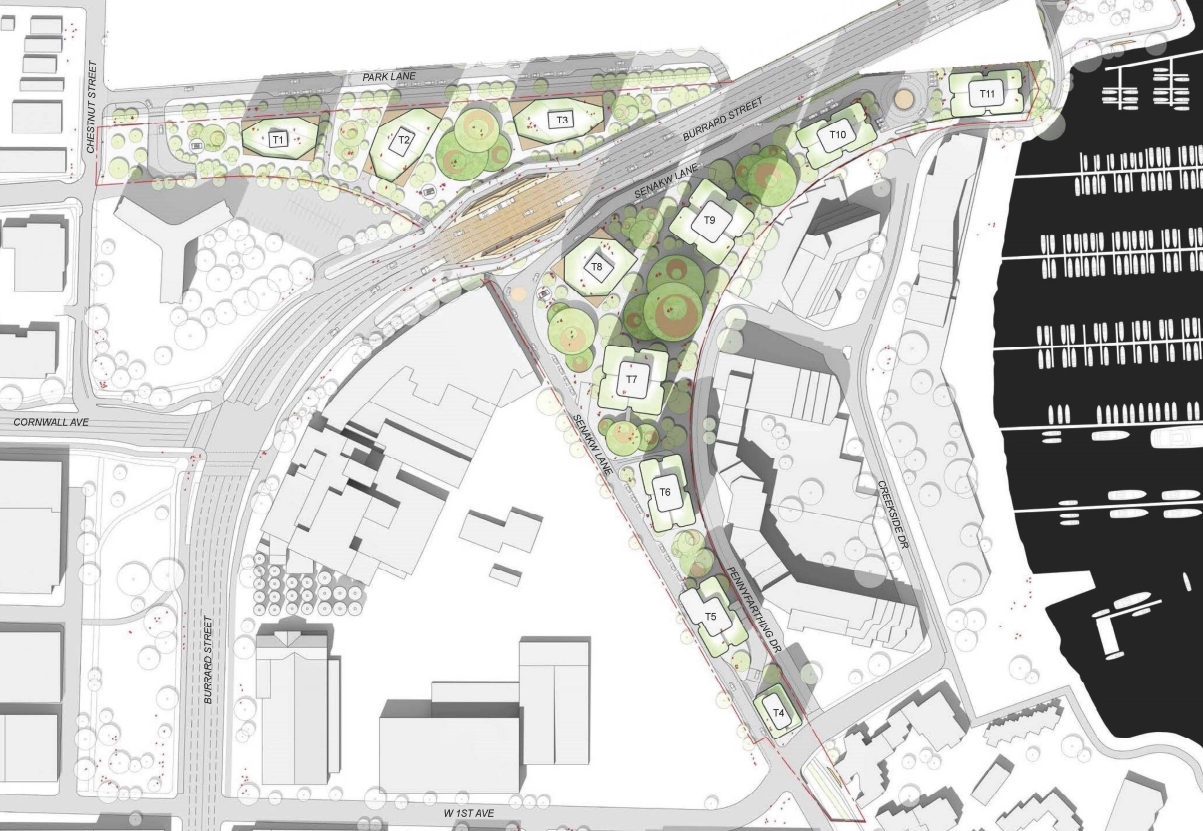 Site plan of Senakw, with the new Vanier Park Road shown at the top, outside of the reserve boundaries. (Revery Architecture/Westbank/Squamish Nation)

This includes a new $6.3 million Vanier Park Road along a narrow strip of unused perimeter park space on the southernmost edge of Vanier Park, which will provide access to the first phase. This new road between Chestnut Street and the turn under the bridge will include vehicle lanes, a bidirectional protected bike lane, and wide pedestrian sidewalks.

Pine Street over a route of about six blocks between the seawall and Arbutus Greenway will be redesigned at a cost of $6 million, with the First Nation contributing $2 million. The redesign will establish a new walking and cycling connection.

Various intersection and traffic signal upgrades will be performed on a handful of intersections along Burrard Street and Fir Street.

The First Nation will cover the full cost of adding a TransLink bus transit hub at the south end of the Burrard Street Bridge — accomplished by widening both sides of the bridge deck to accommodate northbound and southbound curb lanes for buses, special bus stops, and reconfigured pedestrian and cycling pathways. There will also be new pedestrian and cycling pathway ramps on both sides of the bridge to provide a direct link to Senakw’s ground level. The estimated cost of this transit hub is $15 million. 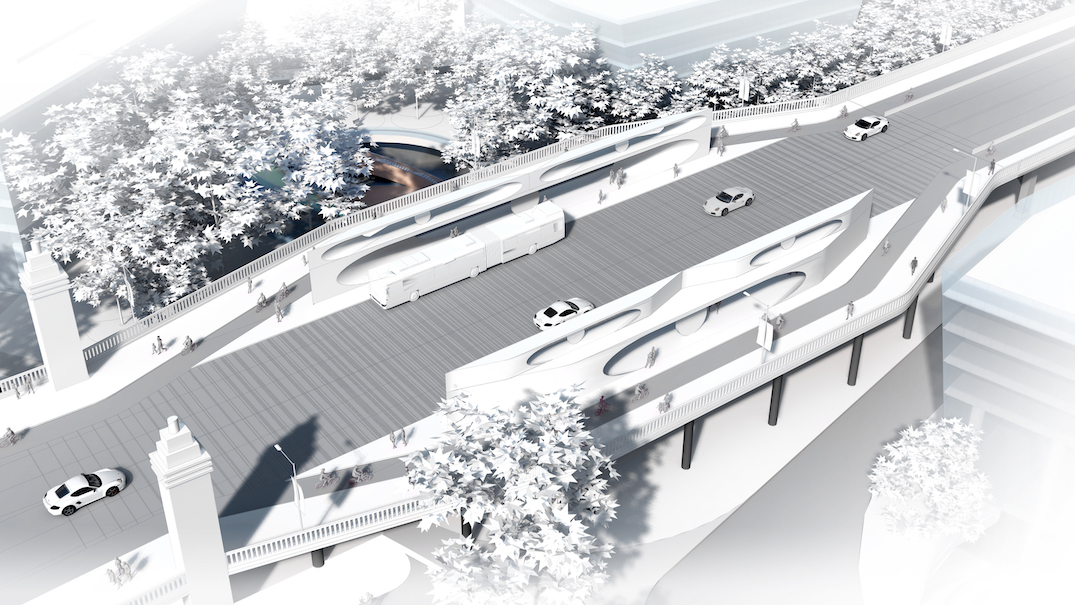 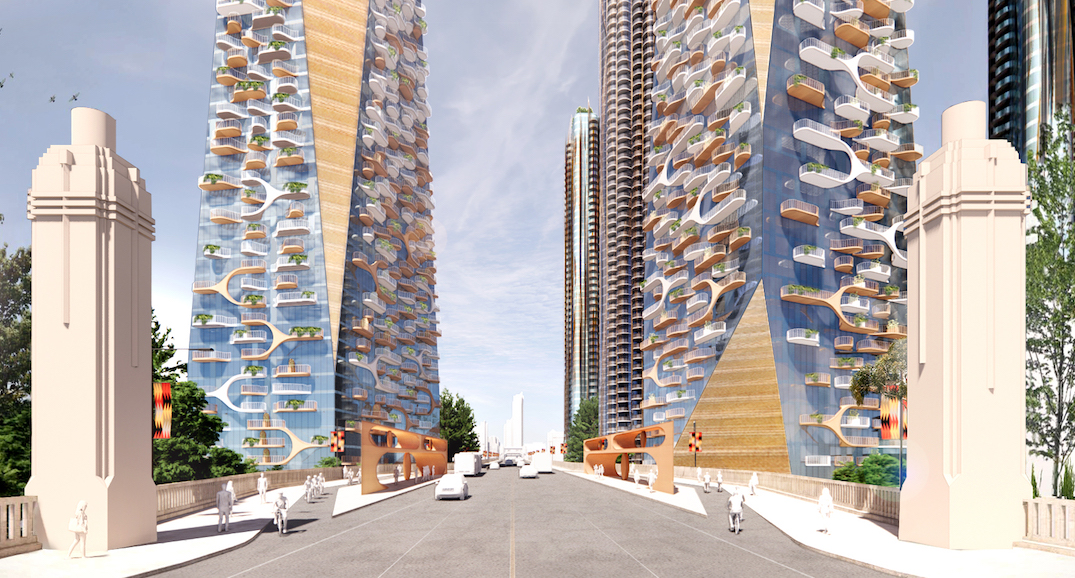 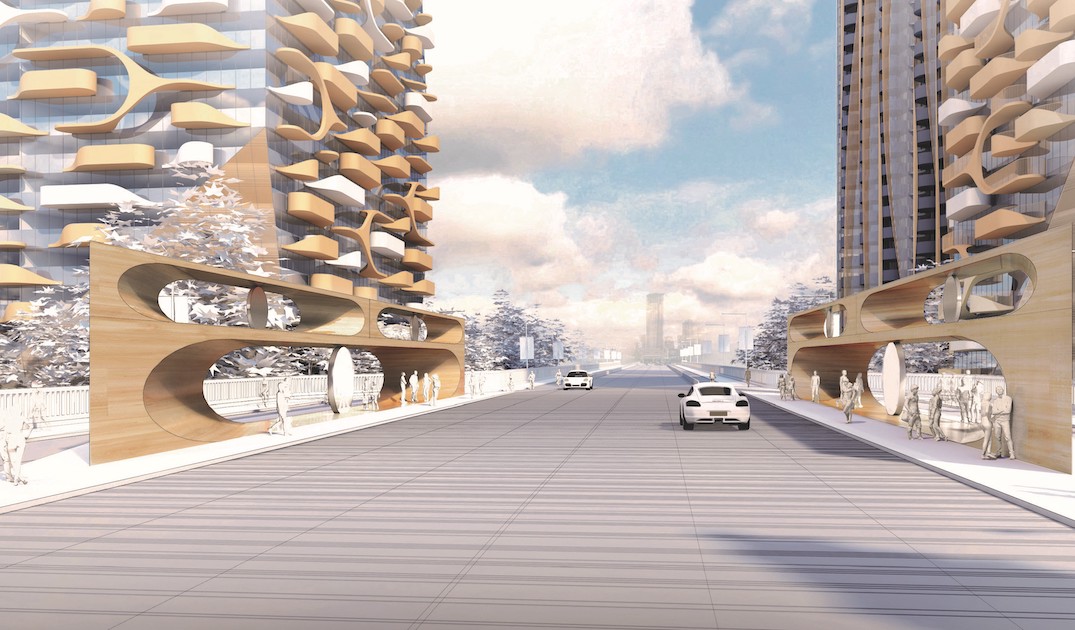 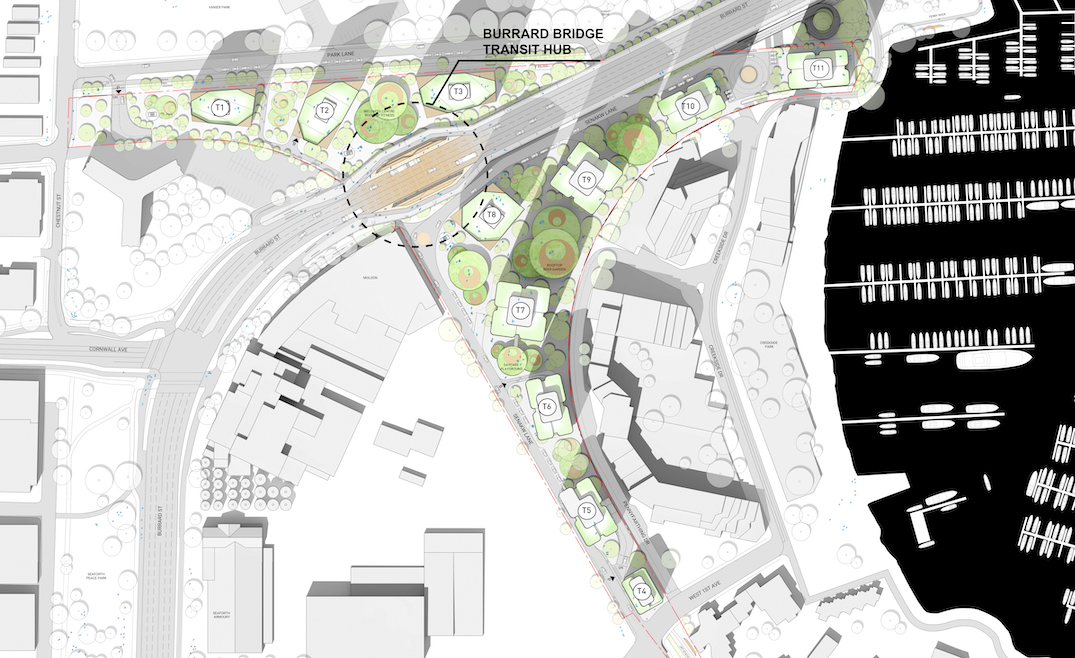 A new passenger ferry (water taxi) stop will be constructed on the seawall, next to Cultural Harmony Grove or at an upgraded Burrard Civic Marina. It is assumed that such a ferry stop would be served by Aquabus and/or False Creek Ferries. 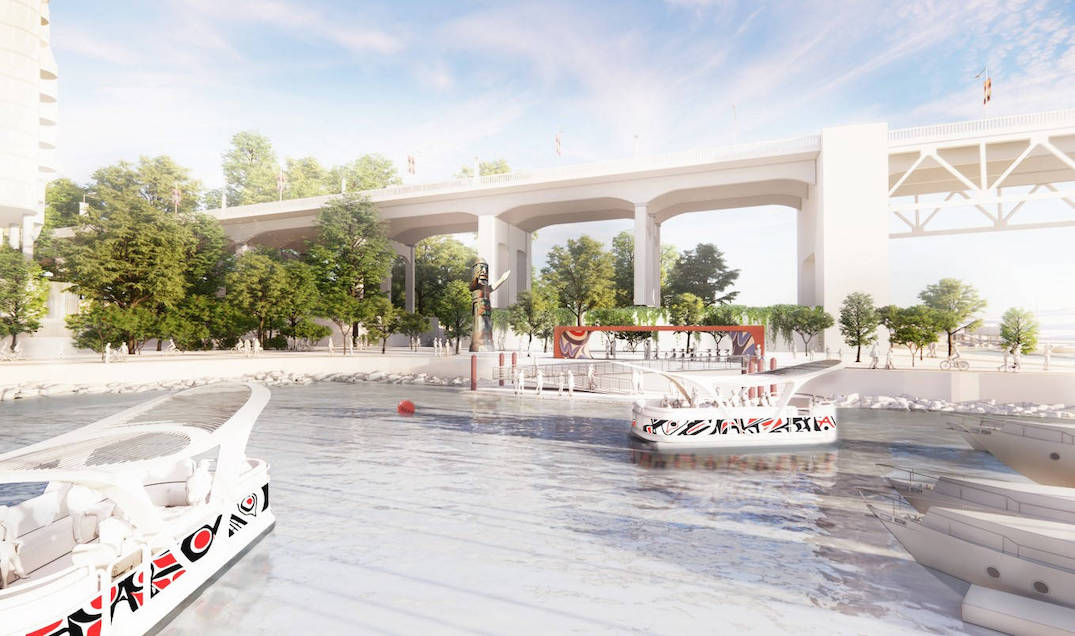 But fundamentally, new major public transit services need to be introduced to help meet the expected transportation demand generated by Senakw. To this end, the First Nation is advocating for the construction of a streetcar line along the False Creek South railway right-of-way between Senakw and the Canada Line’s Olympic Village Station or further east to the Expo Line’s Main Street-Science World Station. This would amount to a reactivation of the temporary Olympic Line streetcar route that operated between Granville Island and Olympic Village Station during the 2010 Olympics.

The First Nation is actively lobbying TransLink and the federal and provincial governments for funding to build the streetcar. However, the public transit authority did not include the streetcar in its recently approved Transport 2050 plan of a 30-year regional transportation strategy.

The First Nation has also set aside a small parcel on the easternmost edge of its reserve for a streetcar station. Additionally, under the terms of the agreement, it will conduct a detailed feasibility study for a streetcar line to Senakw before the completion of the first phase of the development. 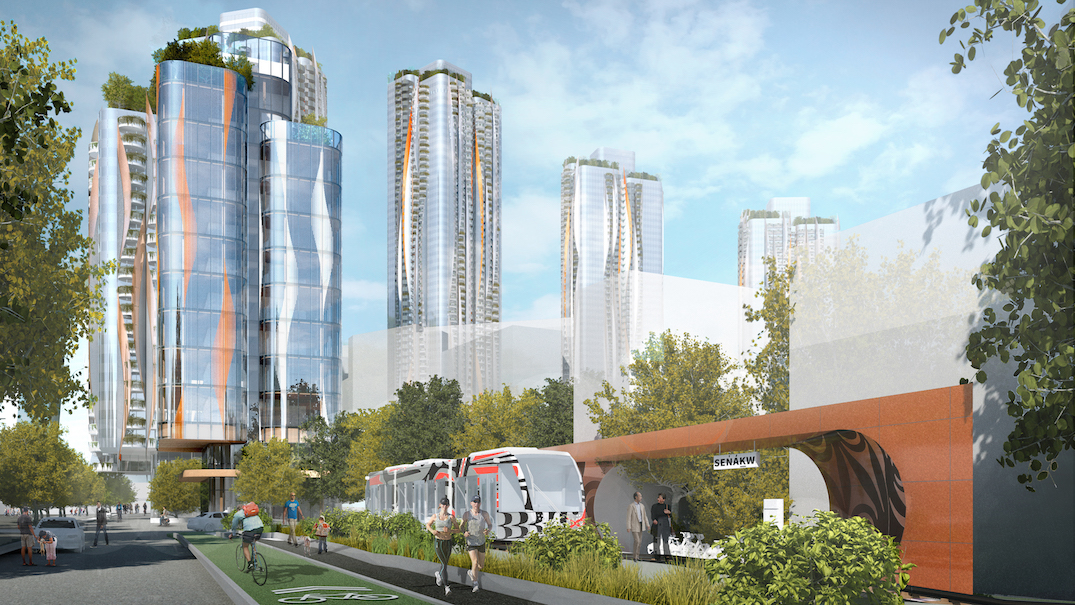 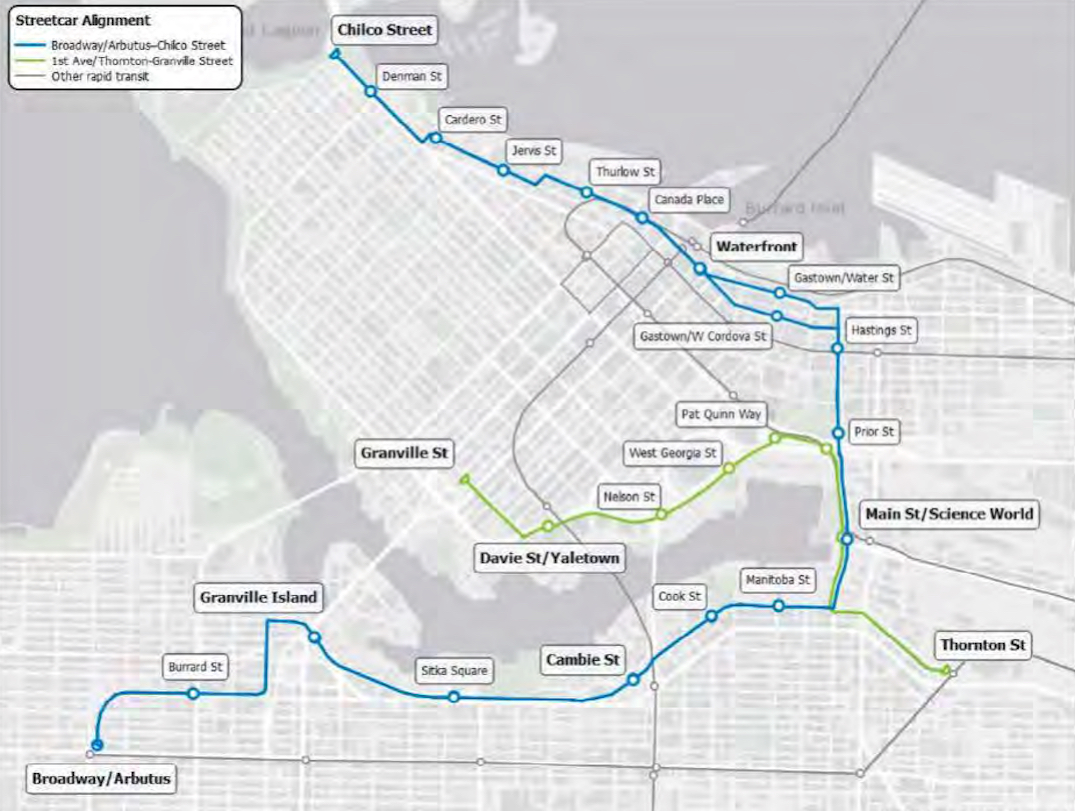 Altogether, the First Nation will provide at least $49 million to fund identified transportation and utilities costs associated with supporting Senakw. This figure will eventually increase as it currently does not include the expensive sanitary sewer upgrades (cost has not been determined), nor the ferry stop, streetcar study, and any future potential streetcar investments.

To access City of Vancouver utilities and services, Senakw residents and businesses will pay municipal property taxes with rates based on the assessed property values, and fees for utilities — the same formula used for all other municipal taxpayers. The municipal government will bill the First Nation annually, and the First Nation will then allocate these costs amongst the residents and businesses of Senakw.

Under the agreement, the First Nation is required to cover all costs incurred by the municipal government related to planning and studying how Senakw is to be accommodated and integrated with the rest of Vancouver, plus a 20% administrative fee on the City costs.

As of December 31, 2021, the City of Vancouver has incurred about $900,000 in reimbursable costs related to Senakw, including about $680,000 in City staffing costs, with transportation planners accounting for about one-third of the cost, the largest segment.

Detailed plans for Senakw were first publicly released in Fall 2019, and members of the First Nation overwhelmingly voted in favour of the project in a referendum in December of that year.

The First Nation selected local developer Westbank as a 50-50 project partner. Over the lifespan of the buildings, Senakw could generate up to $20 billion for the partnership, with the First Nation earning 50% or up to $10 billion.

It should be emphasized that Senakw is being pursued as a revenue-generating economic development opportunity, effectively providing this First Nation with a significant and steady revenue source to practice self-determination, and provide new and improved services and opportunities for generations of members, today and well into the future. 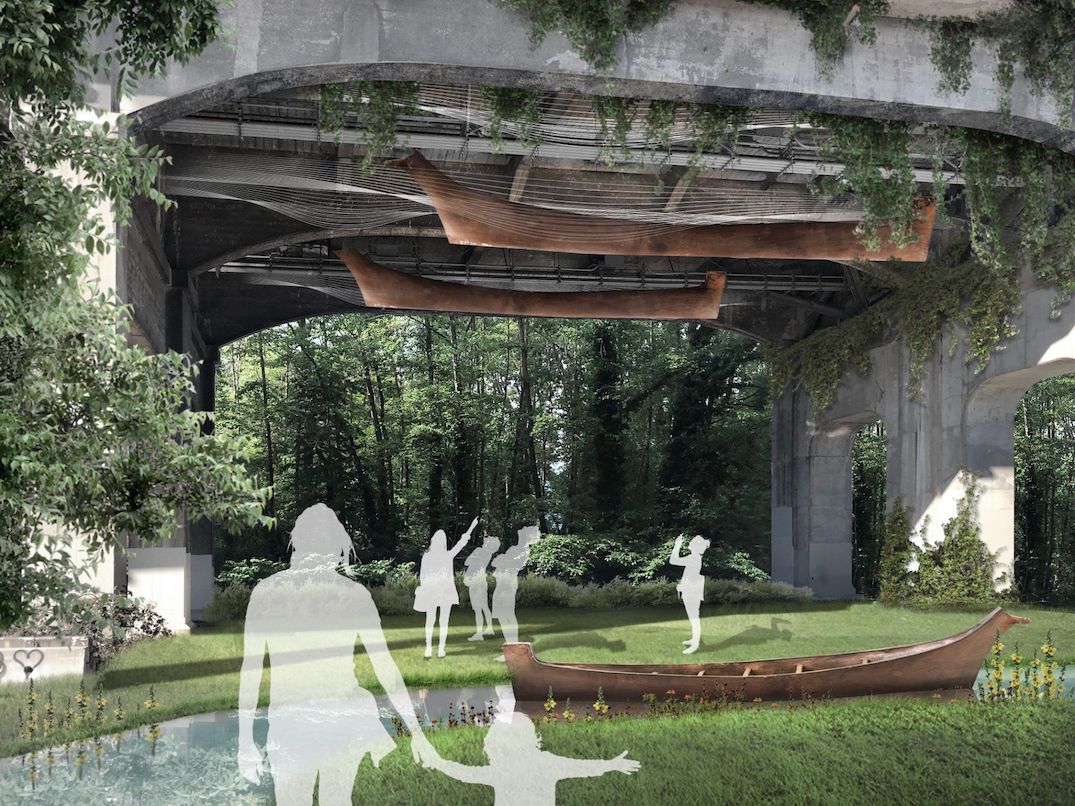 Artistic rendering of recreation/sport spaces on the underside of the Burrard Bridge as part of Senakw. (Revery Architecture/Westbank/Squamish Nation)