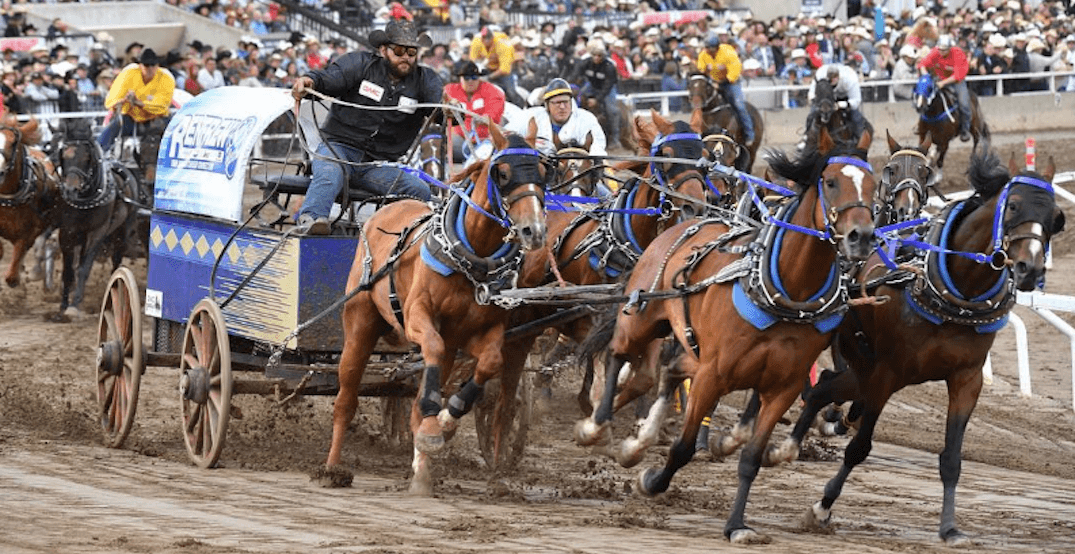 Another horse has died during this year’s Calgary Stampede.

One of the chuckwagon race horses owned by Obrey Motowylo suffered a fractured left front radius during the second heat of Wednesday’s races, according to a release from the Calgary Stampede.

The release states that “it was determined there was no option for treatment and the horse was euthanized,” and that the injury is common in racing horses.

The incident marks the second chuckwagon horse death this week, as another animal belonging to Troy Dorchester died of a serious internal medical condition on Monday.

The prior Calgary Stampede release stated that an investigation is underway, but that “at this time there is no indication that this medical condition is specific to chuckwagon racing.”

The annual event drew some heat from Canadian animal law organization Animal Justice, which called on the Stampede to end the chuckwagon races for good.

People for the Ethical Treatment of Animals (PETA) also issued a release following the initial death, which stated that a letter had been sent to Premier Jason Kenney and Minister of Agriculture and Forestry Devin Dreeshen calling for an immediate ban of the races.

“The Calgary Stampede’s death toll will only rise as long as horses are being forced to pull wagons around a track at breakneck speed,” said PETA President Ingrid Newkirk in the release.

“Chuckwagon races result in fractured legs, broken backs, and heart attacks, and PETA is calling for their immediate end before more animals pay the ultimate price for human fun.”

In the letter, PETA cites the death of six horses during the 2010 Stampede (four of which were chuckwagon race horses) along with more than a dozen in the years since as evidence that the chuckwagon races are an “inherently cruel and dangerous” practice.

PETA’s full letter can be read below:

I’m writing again on behalf of PETA and our more than 6.5 million members and supporters worldwide—hundreds of thousands of whom are Canadian—following the death of yet another horse during the Calgary Stampede chuckwagon races, this time from a serious internal medical condition. The horse—named Dylan—had collapsed during the second heat of the races. We urge you to direct the Calgary Stampede to ban chuckwagon races immediately before more animals die from these dangerous and reckless events.

The high-speed and highly stressful nature of chuckwagon racing makes it inherently cruel and dangerous. Horses have sustained fractured legs and broken backs and have suffered heart attacks. Any casual observer of the races sees horses foaming at the mouth and their eyes rolling back in their heads. After six horses, including four used in chuckwagon racing, died during the Calgary Stampede in 2010, rules were tightened. Yet the carnage continues: More than a dozen animals have died since then, including a horse last year who sustained a fracture during the race and had to be euthanized and one the previous year who died from a similar injury.

Animal protection organizations across Canada have called for an end to these devastating chuckwagon races. Alberta’s Animal Protection Act prohibits causing animals distress, and it defines an animal in distress as one who is “abused or subjected to undue hardship, privation or neglect.” Since horses used in these races surely endure hardship, these events appear to be in violation of the law.

Caring people around the world are watching and bracing themselves for more bad news for animals from Calgary—and they’re appalled that the races continue. We ask that you use your position and authority to end this deadly, archaic event. May we hear from you?