I just returned from the pinnacle of sporting awesomeness. An event so loud and epic that it almost caused Twitter to explode (thanks Richard Sherman) and still has my ears ringing.

This past weekend, in a city that has had its share of bad luck teams, I witnessed one of my life’s bucket list items: the Seattle Seahawks playing for the right to advance to the Super Bowl. I’d dreamed of attending the Super Bowl since I was a kid, and this was even better. Dare I say that a Seattle Seahawks playoff game just might be the greatest possible sporting experience in North America? Not bad for a two and a half hour trip from Vancouver.

Throughout my life I have had a deep fascination with sports. I watched them, I played them, I cut out newspaper box scores and collected trading cards, I would even turn down the volume on the television, harness my inner John Madden and provide my own colour commentary for games. I knew that once I was an adult and could make my own decisions, I would decide to go to lots of sporting events. Turns out I was right.

I’ve heckled Jose Canseco, been a part of a couple Stanley Cup runs, witnessed two Winter Olympics, watched Mark Cuban squirm as Brandon Roy dropped 18 4th quarter points on the eventual NBA champion Mavericks, rode the 7 train to Shea with some liquored up Phillies fans, experienced Taiwanese baseball, threw out the first pitch at a Vancouver Canadians game that Wayne Gretzky attended, watched a Super 14 rugby match down under, was mesmerized as Mark Messier cracked homeruns at the Russ & Geoff Courtnall Celebrity Softball Tournament in 1989 and witnessed Beast Quake I in 2011. A Seattle Seahawks playoff game is the absolute best experience of them all. Here’s why: 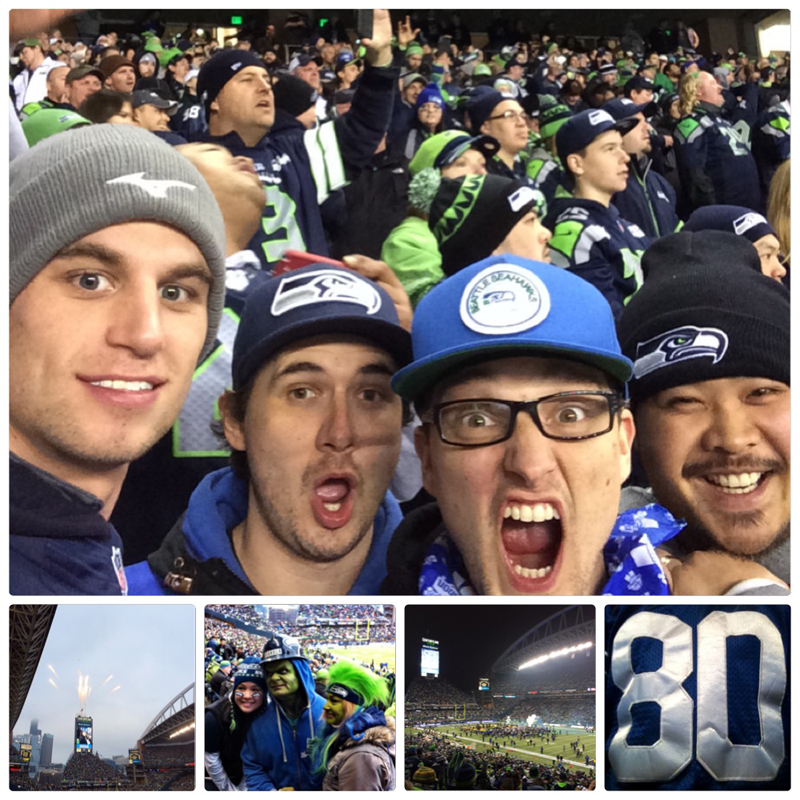 For those who have never been to an NFL game, it’s hard to describe it justly. It’s a full day experience that Seattle maximizes. With a stadium within walking distance of Pike Place Market and the downtown core, CenturyLink Field is surrounded by ample sports bars and watering holes and built for tailgating. The intensity builds the closer you get to the stadium and this past Sunday was no different. Seattle was a sea of blue with a hint of lime green and 12th Man flags were everywhere. They even made Seahawks logos out of sticky notes (and didn’t get a cease and desist from team owners for violating copyright. I’m looking at you, Aquillini).

Every bar with a TV in downtown Seattle was packed. Line-ups for the line-up, cars driving up and down with flags and bullhorns and almost everyone decked out in a jersey. The excitement was in the air and the walk to the stadium was an experience in itself.

Seattle fans have a great reputation for being some of the more friendly fans, and in my over 12 years of attending games I can’t remember witnessing any unacceptable behavior. I’ve heard a few f-bombs and some funny disses, but never any physical violence. On Sunday, the San Francisco 49ers fans were out in full force, and the red/blue dichotomy made for some incredible visuals. Entire streets of blue would give way to packs of red, and while the vibe was a little more aggressive than usual, cooler heads (and a heavy police presence) kept things chill. 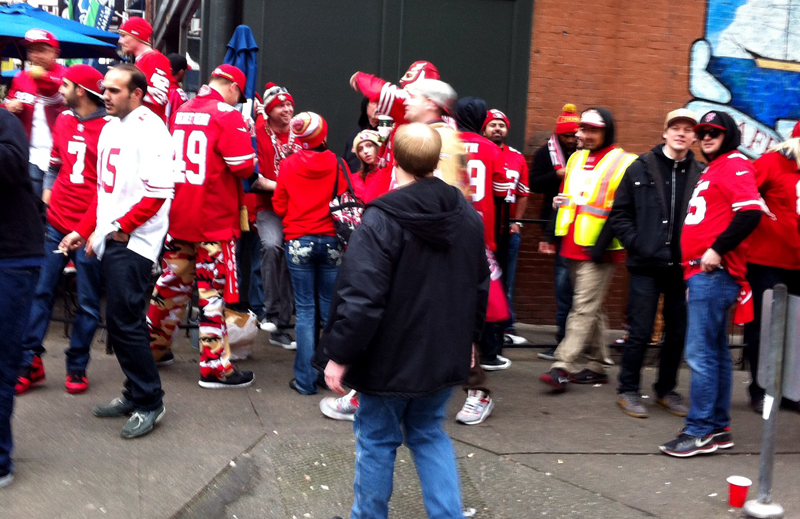 Before a game, the atmosphere around the stadium is electric and it was even more hyped for this huge tilt. The Seahawks Blue Thunder marching band paraded around in a loop, eccentric fans peacocked around in their wacky outfits and dispensed high-fives, Microsoft tried to convert people looking for free stuff to Bing and vendors were hawking every type of merchandise and snack food under the sun. You can even buy snacks outside the stadium and bring them into the game, a novel concept that should be embraced by more teams.

We did some pre-gaming across the street at the home of the Seattle Mariners, Safeco Field and with only $1 admission, plenty of screens to watch the AFC Championship game, $5 beers and the chance to hit up two world-class stadiums in one day it was a great decision. Plus, we saw this green-bearded dude, who later made an appearance on the Seahawks jumbotron screen. 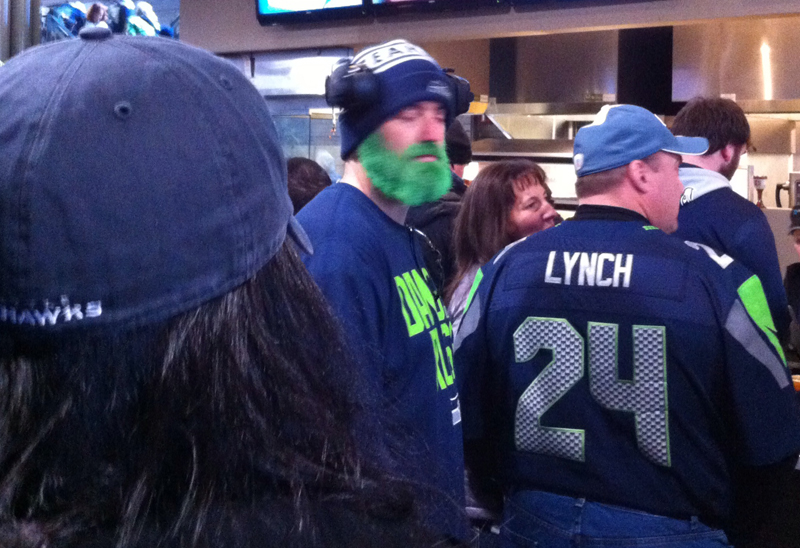 The line-up to get into the stadium was long but moved quickly. Maybe a 10-minute wait, which isn’t bad considering the heightened security for a championship game between two heated rivals. You can bring in a bag (as long as it is clear) but if you go sans bag you get the express lane. We chatted up some fans from Pennsylvania and they were stoked at how cool the fans and atmosphere were. The mood was Mardi Gras festive and you could tell that the city was just waiting for a celebration. Even the maniacal street preachers who were berating us with their megaphones and claiming we were all going to hell got treated well. I can just imagine what the response would have been like in New Jersey.

Once you enter the stadium, you really get an understanding for the business of the NFL. Merchandise everywhere. Beer and food vendors everywhere. Memorabilia everywhere. Football everywhere. You are immersed in all things football and to top it off the stadium is as clean as a whistle.

CenturyLink Field was recently named the best stadium in the NFL for craft beer, and with over 30 microbrews like Elysian and Mac & Jack’s on tap it’s easy to see why. It’s not cheap though, and they marked the craft beers up to $10.50 for the game (Bud Light was $9.50). Twenty-one dollars for two beers is insane, especially when you consider how cheap they are at 7-11. We did get NFC Championship cups though (17 of them).

They don’t mess around with food either. We’ve been sitting in the same seats for four seasons now and they recently converted this one particular empty spot in the corner of the 2nd level (right by our seats) to the Broughham Beer Hall. It’s now a pub with 17 beers, a full wine selection and a menu featuring Seattle’s famous Uli’s Sausage, smoked barbeque brisket and a porchetta sandwich. It was a welcome sight when we first spotted it this year.

The choices throughout the stadium are endless. Tacos, skewers, hot dogs, pizza, potachos (yep), all types of seafood and the classic, garlic fries. Bring gum. I’d have more food and drink photos but I had too many brews and mismanaged my phone’s battery life. Them’s the breaks.

Once you get to your seat I’d recommend just taking a look around and letting the stadium sink in. It’s an architectural marvel that maximizes sightlines, amplifies acoustics and opens on the north end to a beautiful view of downtown Seattle… all while evoking the shape of a football. You’ll want to acquaint yourself with the south balcony, as that is where they raise the 12th Man flag before the game (a Seahawks tradition), the Blue Thunder band pounds the drums throughout the game and also where Macklemore & Ryan Lewis played a real hype two-song set during halftime. As someone who has sat in many different sections I doubt there is a bad seat in the house (although some upper-deckers would be a stairs nightmare). 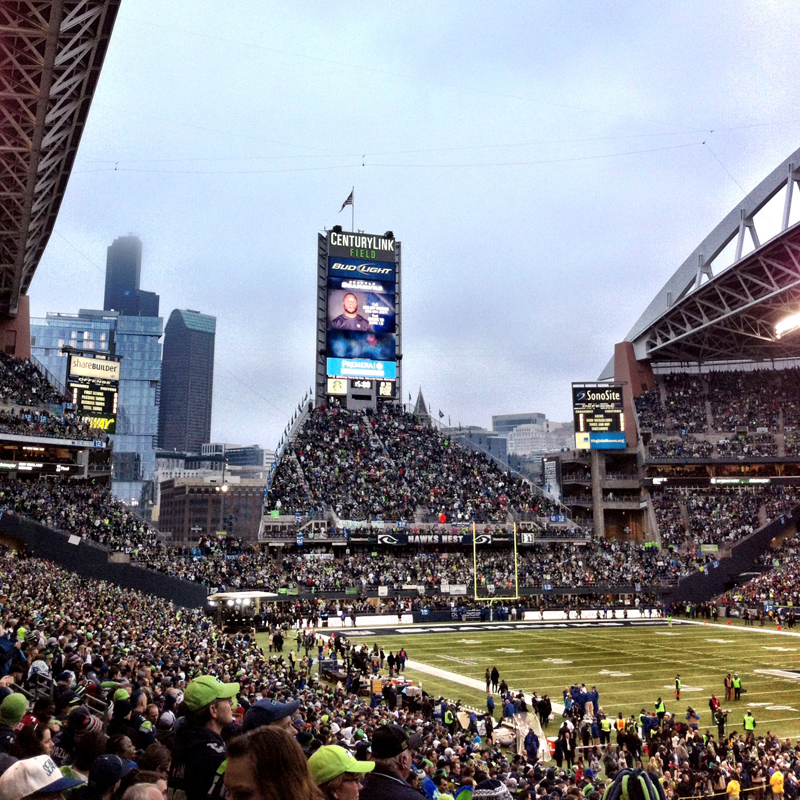 Much has been made of CenturyLink’s loudness and the voracity of the 12th Man. I can tell you that it’s all true… and then some! It is absolutely the loudest place I have even been and it’s not even close. From the moment the players take the field you get hit with a wave of sound and it just doesn’t stop. When you look around hardly anyone sits down (except for the section beside us, they’re notorious sitters and we raze them for it) and almost everyone is yelling, clapping or dancing like a broken (or drunk) robot. When the Seahawks raise the 12th Man flag before the game it gets insane, especially since they had the hero of the Seahawks, owner Paul Allen, raising it up. When you plug your ears all you hear is a roar. 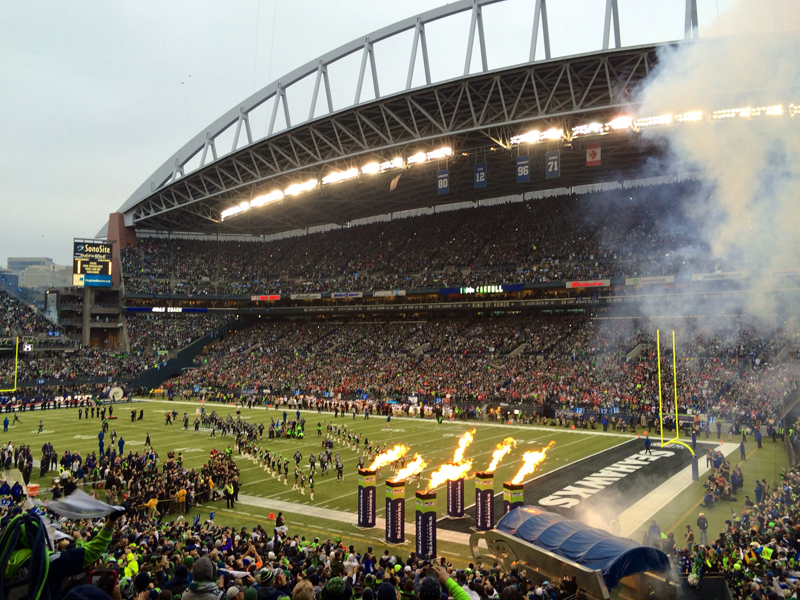 I’ve also read a lot of smack about how fans can’t influence sporting events and I personally believe that to be BS. Numbers don’t lie, and the Seahawks lead the NFL in false start penalties on the opposing team. Every time Colin Kaepernick (aka Squidward) went in for the snap the stadium went ballistic; it definitely caused more than a few problems for the 49ers. I couldn’t imagine what it would be like to be a player in that position but if fans can’t even hear themselves think imagine how hard it is on the players. I’ve even heard some people say it’s too loud, which is like saying Bill & Ted’s Excellent Adventure is too awesome. As far as in-game experience is concerned, Century Link Field is second to none.

Our seats are pretty good and are close to the south end zone. That just happened to be the end zone where Richard Sherman deflected Kaepernick’s TD attempt and sealed the game! At that moment it was pure pandemonium, people jumping into each others arms, high-fiving, even some people crying tears of joy. It was absolutely crazy and the perfect ending for an unbelievable game of football.

The 49ers fans were lightning quick to disperse. When Richard Sherman was channelling the Macho Man in his post-game interview the red and gold were scurrying out of the stadium and by the time the Seahawks were awarded the NFC championship trophy there was no red left in the stadium. A Seahawks victory probably also averted a potential riot, as a heartbreaking loss coupled with fired-up Niners fans could have been a recipe for some real-life scenes straight out of The Warriors. 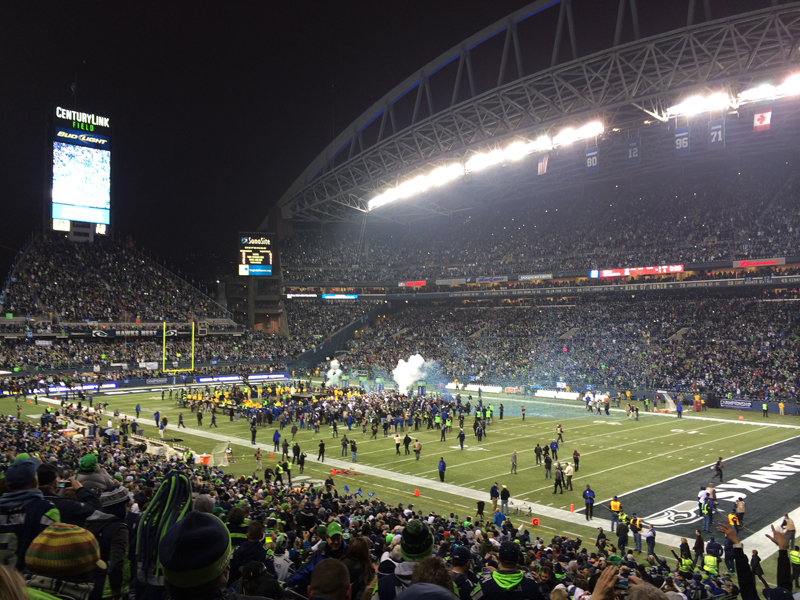 After the game, the party spilled out onto the streets and all one had to do to get some high-fives was stick out your hand. It was very comparable to the vibe in Vancouver during the Olympics and while it wasn’t as crazy as the scenes after Crosby’s golden goal it was still pretty wild. By the time we made it back to our hotel later that night it felt like we had completed some sort of sports fan decathlon. Bucket list, checked.

For all you Vancouver sports fans who have never driven, bused or trained down to the Emerald City for an NFL game, there’s always next year. You can get tickets for around the price of a Canucks game (which are one of the biggest rip-offs in sports) and since Seattle only hosts eight home games a year (as opposed to 41 hockey games), you know the fan experience will be intense every game. The food and drink options might not be cheap but show me the arena where they are? At least at a Seahawks game you get quality, local fare if that’s what you’re into (and hot dogs, garlic fries and Bud Light if you’re not). I’m talking about options. The Seattle fans are as friendly and welcoming as they come while also being knowledgeable and insanely passionate about their beloved ‘Hawks. The stadium is a marvel and it’s right downtown, leaving you with the great city of Seattle to explore before or after a game. It’s perfect. You won’t be dissapointed.

Want to try and argue that a Canucks game is a better sports experience? Bring your “A” game in the comments or else I’ll swat your mediocre comments like Richard Sherman.