Currently in it’s sixth year, Seasons Festival is one of Blueprint’s longest running multi-day event properties that spreads across a number of Vancouver venues culminating in a two-day main set at the Pacific Coliseum. Historically a festival that’s been primarily driven by electronic dance music, this year boasts its most diverse programming to date by including more live, experimental, and hip hop acts like Detroit techno legend Kevin Saunderson, Nu-R&B producer Sango, U.K. art-pop experimentalist SOPHIE, Korean rapper Keith Ape, and over 60 others.

Continuing to broaden its horizons this year, the festival places a major focus on art and technology by including visual and new media installations curated by local collectives Tangible Interaction, Hybridity, Generate, and others. Continuing their ongoing commitment to the community, Seasons extended their charitable partnerships with the Greater Vancouver Food Bank, Feed the People, A Better Life Foundation, and Music Heals for both volunteer and direct donation contributions by festival goers and staff.

We got a chance to speak with Matt Owchar, Marketing Manager and Talent Buyer at Blueprint Events, about the growth and evolution of Seasons Festival since 2011.

How long have you been part of the team at Blueprint Events and Seasons Festival specifically?

I’ve been with Blueprint for about eight years now in a multitude of roles. I started out by working with them casually as a DJ and promoter and slowly, as I proved my merit, was given more projects until I got to where I am now: a mixed bag of marketing and talent buying.

This is really the first year where I’ve gone all in with Alvaro, founder and head talent buyer at Blueprint, in terms of actually booking for Seasons. In the past, I’ve mostly served as the primary marketer and helped with things like artist scouting and development; this year is definitely my first to truly be, “in it.”

What makes Seasons stand out from all the other festivals Blueprint produces throughout the year?

Right off the bat, the way Seasons functions is the main difference: across five days with multiple events across venues ranging from a 250 person club to a 6,000-plus person arena. The rest of our festivals are typically insular in nature, meaning that they’re in one place and are spread out over just one or two days.

In the beginning, before Seasons was created, the challenge was: how do we book a series of events that all share some sort of commonality? In the past, the festival was more mainstream dance centric; mostly because of our expertise in booking and marketing that content, but also because it allowed for us to experiment with the format and really nail down how to get it right.

After that, our next goal was to elevate the content to become more cerebral, experimental, and encompass more than just electronic music. Last year, we softly introduced three more core focuses to the festival being new media art, technology, and community. This year, we’ve greatly expanded upon those core focuses, especially with the Hybridity showcase that we’re using as a vehicle to activate the dormant 4,000 square foot space beneath Celebrities nightclub. Curated in partnership with Malcolm Levy, we’ve managed to put together a series of events that will really deliver on the new media art and technology pillars of the festival.

In terms of community, last year we donated $1 from every ticket sold to the Vancouver Food Bank and raised over $14,000. This year, we’re doing that again and also have initiatives set up with A Better Life Foundation, Music Heals, and Feed the People where we’ll actually be hosting an event to feed people in the Downtown Eastside. We’re really encouraging people to embrace this dimension of the festival, especially since it’s during Easter weekend, so make sure to visit the Seasons Festival community page to learn about how you can participate. 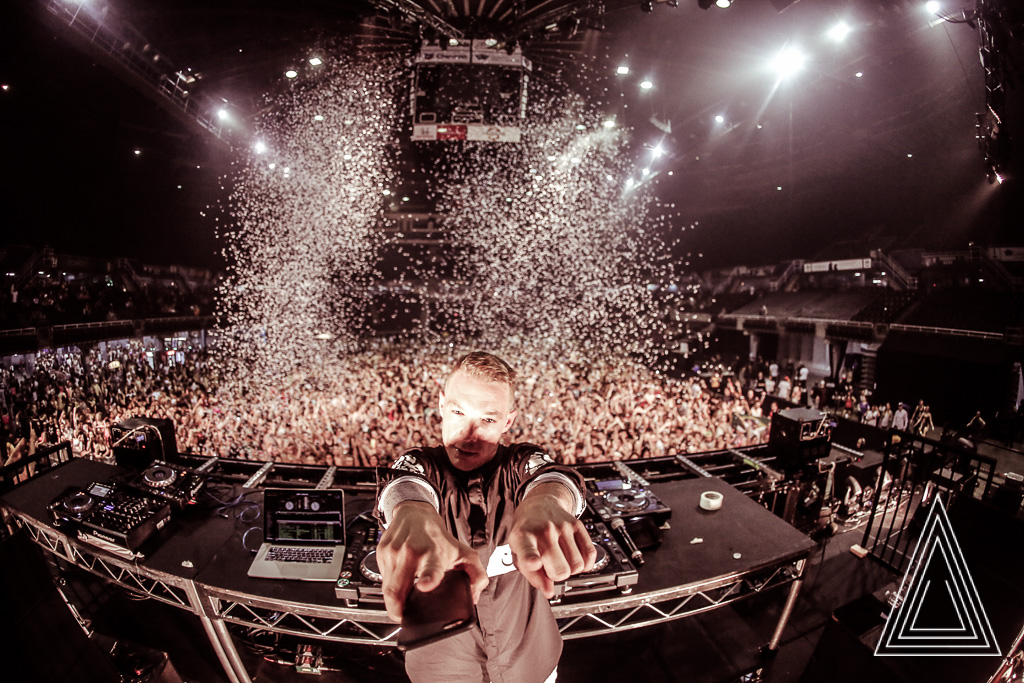 Why is Vancouver the best place to house a multifaceted and multi-genre festival like Seasons?

Despite all the challenges we face here, Vancouver is a nice place to live and there’s no doubting that. Ultimately, we’re just trying to connect dots and gather different people and scenes together that initially may not seem to have that much in common. Positioning that, along with all of the global talent we bring in, is just our way of sending a message to the world saying, “Hey, Vancouver is an incredible place that’s full of many talented people. Recognize that!”

We export a lot of culture as a city, but I don’t know how much of that we get to actually enjoy or celebrate ourselves. We’d love to see Seasons reach a point where it’s a destination festival; where we can continue to expand on its core philosophies in more meaningful ways with panels and presentations, basically add a “conference” element in. If TED can do it, why can’t we?

Why is the local scene so important to the programming at Seasons?

Like I mentioned previously, we’re a hotbed right now. I mean, I can really only speak on the last 10 or so years that I’ve lived here on and off, but the talent pool in Vancouver right now is incredible; it’s also extremely diverse. The only problem right now is that there are so many incredible electronic music artists in the city at the moment that it’s a) impossible to include everyone at Seasons, and b) hard to keep track of them all as they continue to emerge!

I really value the work that someone like Derek Duncan has put in as an independent promoter, record label owner, and record store owner. He has essentially been the nucleus of a loose aggregation of Vancouver’s underground labels and scenes like Mood Hut, 1080p, and many others. Bringing in his expertise and experience to the festival was super important to us. Of course, Malcolm Levy and Hybridity undeniably have also built so much within Vancouver both with New Forms Festival and all of the great acts that they’ve supported in Vancouver like Humans.

The Monstercat guys are also just a behemoth in the dance music world right now and run their whole operation from our own backyard. We’ve also got young blood in the city in the form of Pomo and Ekali who are bringing unparalleled musicality into their respective genres. Shout out to Tommy Genesis and LNDN DRGS for taking our hip hop scene into new territory as well.

There are so many Vancouver artists creating an impact globally right now! To have everyone together and exploring each others art is, to put it in the words of Derek, “A beautiful thing!” Next year and beyond, it’s our goal to work with and support more local talent, from artists to labels and other curators. 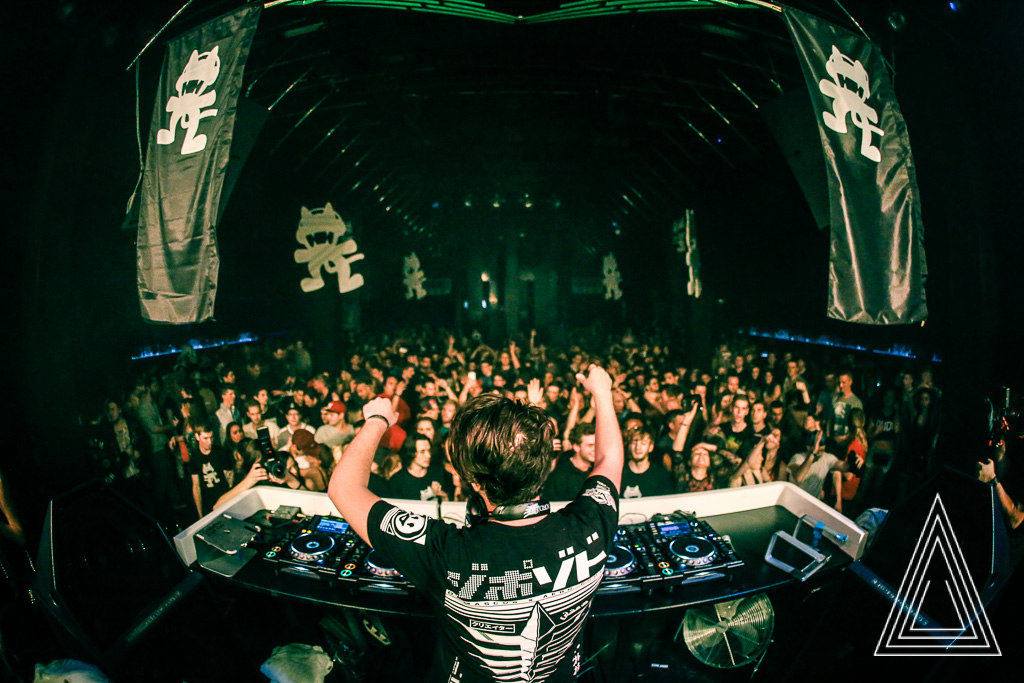 What are some of your “must see” acts of Seasons Festival this year?

Our all ages main event is also going to be headlined by two electronic musicians, Porter Robinson and Odessa, who will be performing live acts, which is just so remarkable to me; those are two nights that definitely can’t be missed. To say we’ve matured as a festival this year would be the understatement of the year.

Get a five day wristband and check out as much as you can! Check out places like Open Studios, Celebrities Underground, and MIA if you haven’t before. Meet new people, discover new artists, dance, and just have a good time. Appreciate how much our city has to offer when pretty much everyone and everything is out there trying to convince you that Vancouver sucks or whatever. 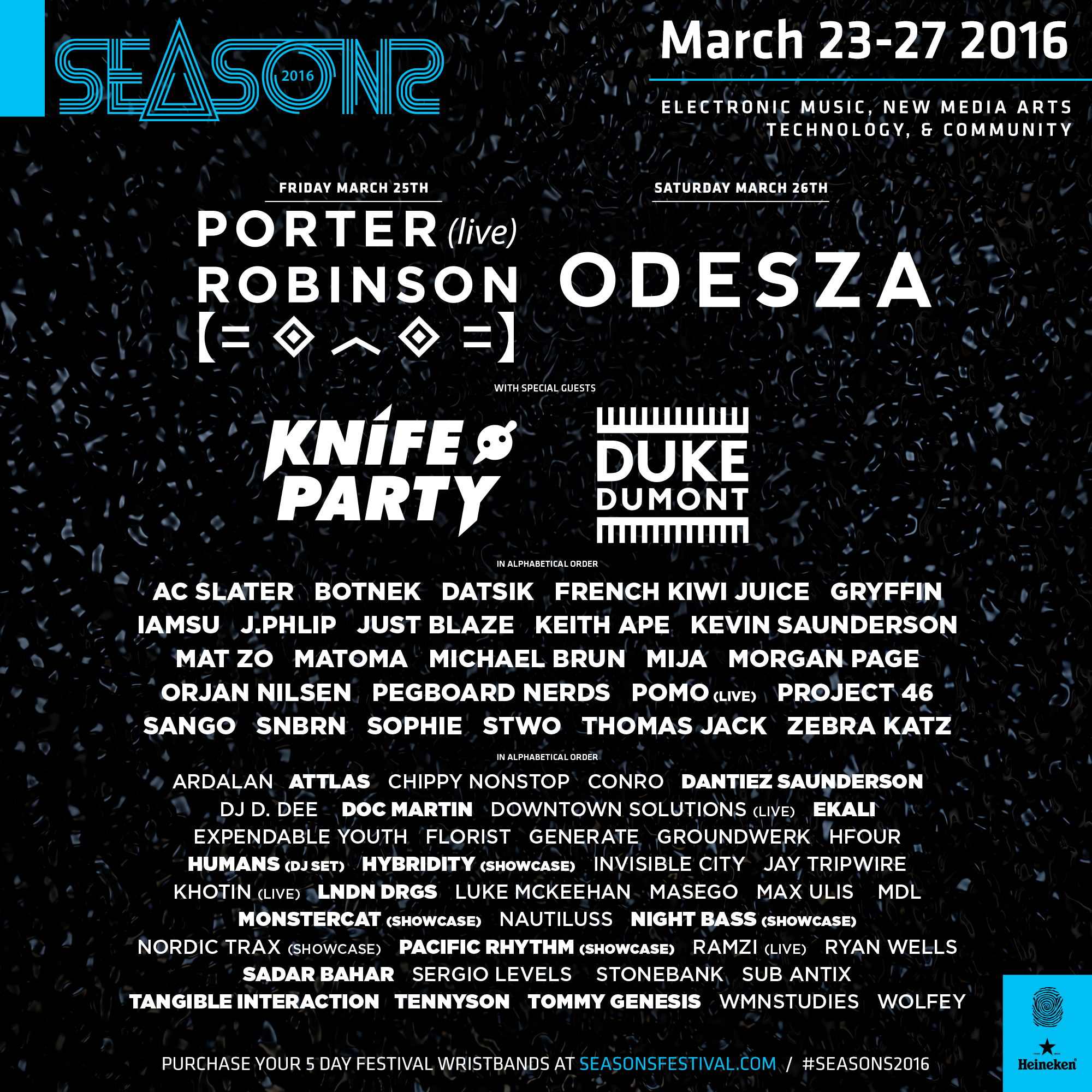