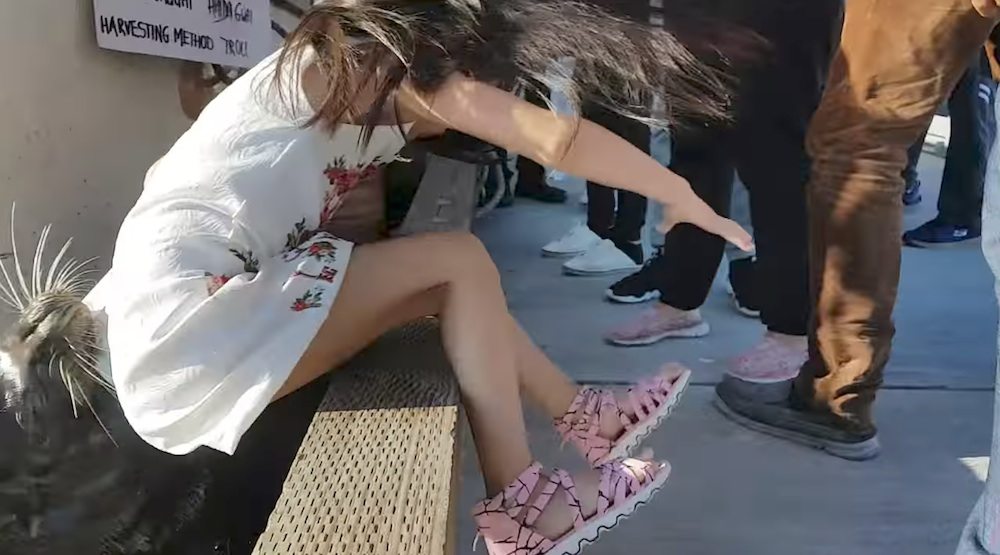 The moment when a young girl is pulled into the water by a sea lion in Steveston. (Michael Fujiwara / YouTube screenshot)

While sea lions do look adorable, it is important to remember they are wild animals and can be dangerous.

A young girl likely learned this when she was dragged into the waters by a sea lion at the Steveston wharf in Richmond on Saturday.

Video that captured the incident, and posted onto YouTube, shows the sea lion circling the waters to a small crowd of onlookers. The animal swam close to the ledge of the dock, and as it neared a young girl sat on the water’s ledge.

With the girl just two feet away, the sea lion leapt halfway out of the water and bit on her dress, pulling her into the water in a split second.

Screams from the crowd could be heard as the girl enters the water and submerges underneath. Moments later, a man is seen jumping into the water to save the girl.

Fortunately, the young girl was not injured and she was able to walk away on her own after being pulled out of the water.

Sea lion attacks on humans rarely occur, but they do happen. They have sharp canine teeth for hunting fish, can swim up to 35 km/hr to hunt or avoid predators, and some species can weigh up to 2,200 lbs.

According to the federal government’s Department of Fisheries and Oceans’ guidelines for observing sea lions from land, a distance of at least 100 metres should be kept at all times.

California sea lion species are known to congregate in Steveston, particularly on the rocks of the Steveston Jetty.

From April to May each year, male sea lions migrate to the waters of southern BC to feed on the fish populations before returning to the Californian and Baja Mexican coast to breed.