A strange jellyfish-like creature has been washing ashore from California to B.C. and the world is wondering what the heck is up with these “by the wind sailors.”

They’re called velella velella, but are known as “sail jellyfish” or “by-the-wind sailors.” Velum is from the latin for sail, explained the Tofino Time in 2005, when the mysterious creatures had come ashore. The creatures “each measure around seven to 10 centimetres, are bright blue and distinguished by a gas-filled float that rises above the surface of the water,” reports the Daily Mail UK.

Even though they are ocean-dwellers, these creatures actually can’t swim. That’s where their sail-like bodies come in, and they move at the mercy of the wind. 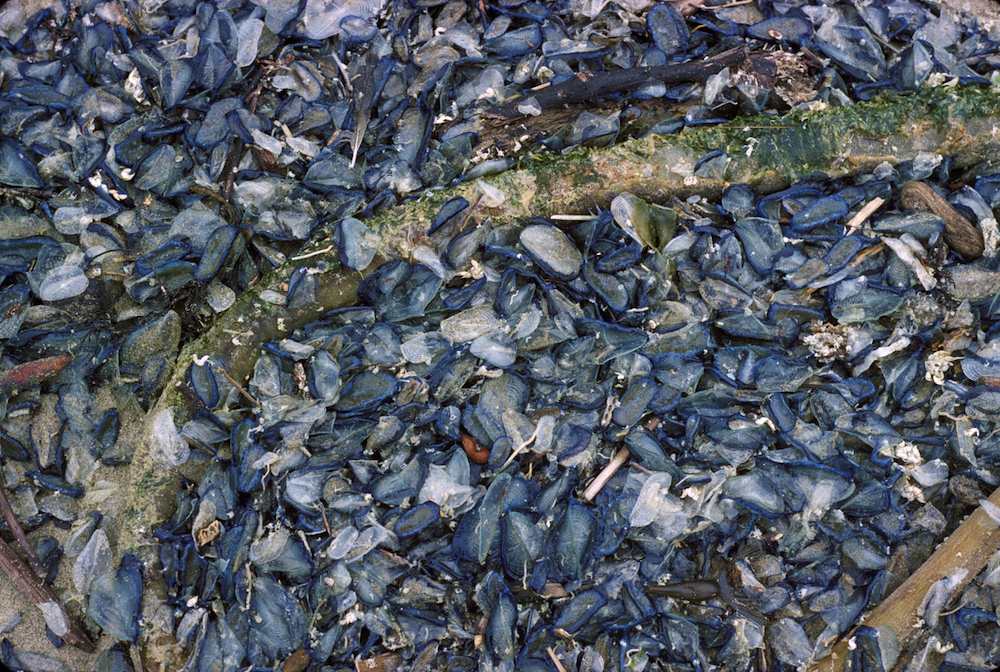 Around the globe, people are talking about the bizarre sight of the “by the wind sailors” blanketing the beaches, from San Diego to right here in British Columbia. Earlier in August, the sands of Tofino were once again covered with the creatures, and the spotlight was on Tofino Mayor Josie Osborne, who is also a marine biologist.

Osborne told the CBC the arrival of the “by the wind sailors” was alas deadly for the creatures, and their demise a bit of a stinker for anyone in the area, as they were expected to begin to rot on the beach. Osborne said in the interview:

“There is no way they could survive […]They are ocean creatures that are normally found hundreds of miles off-shore in the Pacific. It is a rare event, but a natural event for them to wash up on shore.”

What was happening in Tofino earlier this month is just a fraction of what’s been going on with the velella velella on the West Coast. “The number of velella that have washed up on North America’s beaches is staggering, with possibly billions stranded,” notes the Daily Mail.

As Osorne and other experts have pointed out, the velella don’t have a sting that can harm humans. “Besides a little stench, the beaches are fine for visiting and beach walkers are welcome. Just watch your step!” chides Ucluelet’s Black Rock Oceanfront Resort.

So why this year? While the creatures are “perplexing” to marine experts, we do know that their washing ashore “is thought to coincide with the warming up of coastal waters,” adds the Daily Mail.