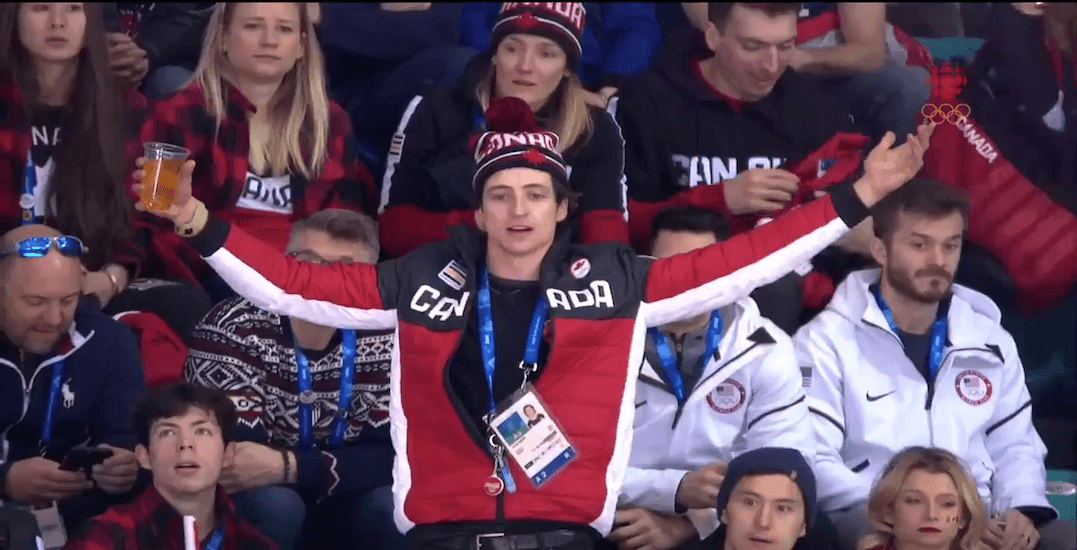 On Wednesday evening, all of Canada collectively stayed up late to watch Canada and the United States battle for the gold medal in Olympic women’s hockey.

Both teams battled to the bitter end and the Americans won the game 3-2 in a shootout, ending Canada’s four-year winning streak.

But eyes weren’t just on the women during the matchup. Olympic gold medal skater Scott Moir unknowingly stole the show.

And thankfully, CBC dedicated plenty of screen time to Moir.

Not only did he yell at the refs (who could blame him really?), he chugged his beer dressed in patriotic clothing like a true Canadian, and received plenty of side eyes from his fellow teammates along the way.

Moir was not only the ultimate hockey fan but the ultimate Canadian in Pyeongchang today and we couldn’t be more proud.

And of course, the internet lost its mind over Moir’s responses. Here are some of the more notable reactions.

Scott Moir is half cut, drinking beer, clad in Canadian colours, yelling at the refs. This should be one of those Canadian Heritage Moments.

Honest question: has Scott Moir rallied a country more as an ice dance gold medallist or as a beer-drinking hockey fan who wants some justice from the refs?

I’ll hang up and listen.

On a scale of 1 to Scott Moir, how much do you love Canada? pic.twitter.com/em9pCKnK6w

“ARE YOU KIDDING ME?? WAKE UP!!” Scott Moir is every Canadian right now pic.twitter.com/Soh3IQ4P4w

Patrick Chan while Scott Moir gave it to the refs 👀 pic.twitter.com/UnhObBYqpW

More shots of Scott Moir half in the bag please #PyeongChang2018 #InOne pic.twitter.com/eEiF5hXMKb

Underrated part of the Scott Moir clip is Patrick Chan looking genuinely afraid of what Moir might do.

Scott Moir appears to be liquored up and letting the refs have it at the women’s gold medal game.

Scott Moir with a pint in his hand, toque on his head, screaming at the women’s hockey final, is an instant heritage moment.

Scott Moir is going to wake up tomorrow morning in the DMZ with a lampshade on his head.

CBC even shared a raw and uncut clip of Moir during the game, where he can be seen shouting at the refs, chatting with Patrick Chan, and chugging his beer.

You asked for it Canada #MoreMOIR @ScottMoir reaction RAW AND UNCUT!