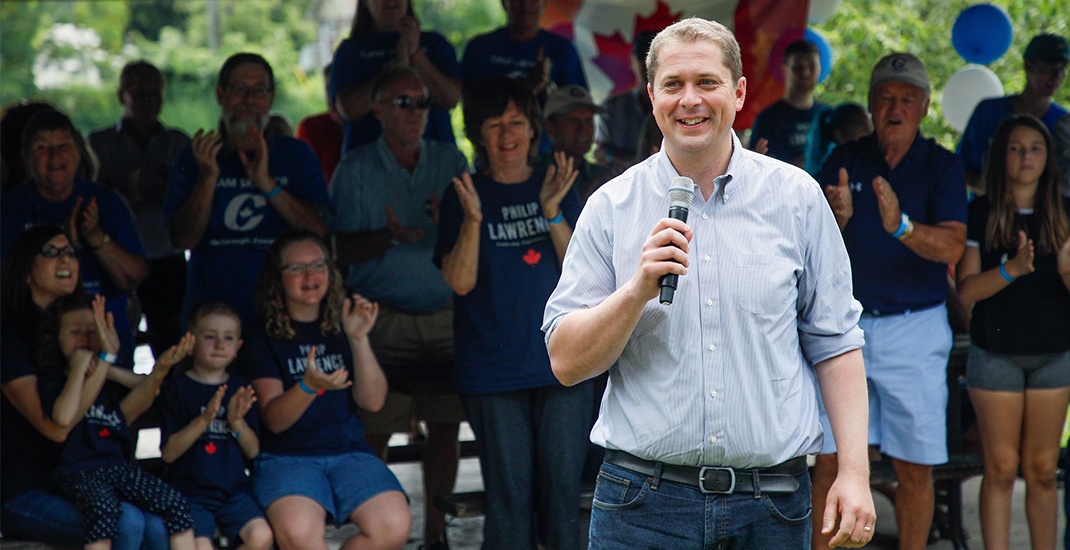 The federal leaders seem certain to take to debate stages this month with only some having revealed a full set of promises and their expected costs.

Only the Liberals and the Greens have so far released their full platforms, with cost estimates for most promises and how they intend to pay for them.

Conservative Leader Andrew Scheer refused to be pinned down on the timing of the Conservative costed platform release when asked repeatedly Monday if Canadians will know the details before tuning in to next week’s official leaders’ debates.

“We have committed to unveiling our platform with plenty of time for Canadians to make decisions, to go through it,” Scheer said during a campaign stop in Whitby, Ontario.

“It will be in plenty of time for the vote. It will be well ahead of election day and it’ll be before the advance polls.”

Advance polls open on October 14, after the official leaders’ debates, which are scheduled for October 7 in English and October 10 in French.

There is also a French debate this Wednesday organized by Quebec television network TVA.

Former parliamentary budget officer Kevin Page, who now heads the Institute of Fiscal Studies and Democracy at the University of Ottawa, said now is “a good time for all parties to post their complete platforms and fiscal plans.”

“We are halfway through the campaign and the debates are about to begin,” Page said. “Fiscal responsibility to current and future generations should be examined in the debates.”

Page added that it “would be good to know how the Conservatives plan to get to balance.”

Scheer has vowed that a Conservative government would balance the federal budget in five years. When the platform is released, Scheer said Monday: “We will show Canadians exactly how we get back to balanced budgets.”

In the meantime, he attacked the Liberal platform as “a recipe for disaster.”

“Out-of-control spending, huge deficits, massive debt that sucks away billions and billions in interest payments,” Scheer said, asserting that Liberal Leader Justin Trudeau “has made billions of dollars in uncosted promises that will force him to either raise taxes, break promises or break the bank.”

Page’s institute has given the Liberal fiscal plan an overall rating of “good,” including a passing grade on realistic economic and fiscal assumptions, good on responsible fiscal management and good on transparency.

The Liberals are promising to impose new taxes on wealthy individuals, large international corporations, foreign housing speculators and tech giants to help cover the cost of billions in new spending and tax breaks for the middle class. The platform projects another four years of deficits if the Liberals are re-elected on October 21, $27.4 billion next year, falling to $21 billion by the fourth year of the mandate.

“The modest fiscal expansion provided in the Liberal platform will not alter the assessment that the federal fiscal structure under a Liberal platform would remain sustainable,” Page said, noting that while deficits would be higher than currently projected over the next four years, the size of the debt relative to the size of the economy would remain “relatively low” and “on a downward track.”

By contrast, the institute gave the Green platform a failing grade overall and a fail on each of the three principles by which the institute is judging all platforms: realistic economic and fiscal assumptions, responsible fiscal management and transparency.

Green Leader Elizabeth May has made 86 spending promises, including universal pharmacare and free post-secondary tuition, while vowing to speed up the transition to a green economy. Her platform maintains this can all be done while returning the federal budget to balance within four years.

NDP Leader Jagmeet Singh released his party’s platform in June, several months before the election was even called. However, he has not yet released a costing of the platform or a fiscal plan, that is to come “in the next few weeks,” according to a party spokesperson.

A spokesman for Maxime Bernier’s fledgling People’s Party of Canada said it “will issue a policy document this week explaining how we plan to reach a balanced budget in two years and what kind of spending and tax cuts we are proposing.”