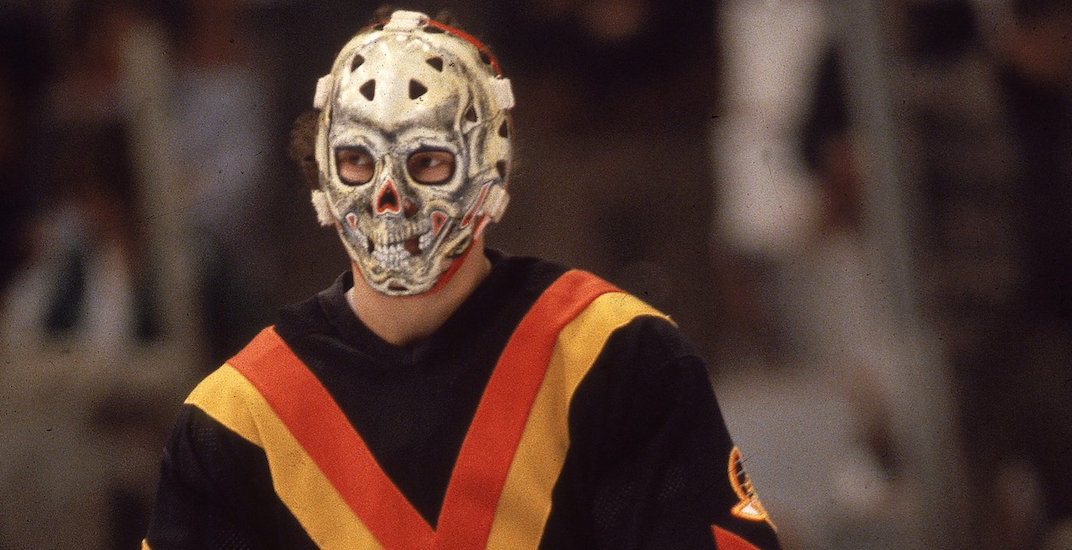 No position in hockey has evolved more over the years than goaltending. Equipment is lighter than ever and goalies are more athletic.

Their masks have evolved too.

There’s a lot more protection for the masked men who defend their team’s goal. With players shooting pucks at over 100 miles per hour, you can understand why.

But not everything has changed for the better.

Let’s talk about goalie mask designs. There are some great ones.

Artists get paid big bucks to design all sorts of masks nowadays. But none of them terrify us like masks from the 1960s, 1970s, and 1980s.

Here’s 13 goalie masks who captured the lost art of terrifying us:

As if that jersey was terrifying enough.

Gilles Gratton had the best mask ever, no discussion should be needed pic.twitter.com/TTO0LUW6ZU

In the Halloween spirit, Iconic will be celebrating the goalie mask

Is he on fire or is he breathing fire? Either way, I just pooped my pants.

Jacques Plante: 1st goalie to win 6 #StanleyCup
First 5 came with a goal mask, a piece of equipment Pioneer Plante made famous to this day. pic.twitter.com/p2CIn1uijt

Less is more with this goalie mask pioneer.

#DYK Bruins’ Gerry Cheevers added a “stitch” each time puck hit his mask, creating a visual reminder of why it was needed #HockeyExhibit 1/2 pic.twitter.com/4obDehN3XO

Snitches get stitches, and so did Gerry Cheevers’ mask.

From the HHOF Archives – Stan Mikita of the @NHLBlackhawks makes a move on Terry Sawchuk of the @Leafs. pic.twitter.com/TdYhrtEh5S

Imagine someone waking you up in your sleep with that mask on.

Man they should get Murray Bannerman out of retirement instead of Crawford! #GiveCrowABreakFolks! #Relax #Blackhawks pic.twitter.com/PSzkGot24r

(Another)Fun Fact – Pelle Lindbergh was the first goaltender to play with a water bottle on his net. He often suffered from dehydration. pic.twitter.com/IKcGtioo3n

Is that Jason Voorhees??

On this day in 1980, Mike Liut became the first goaltender in @StLouisBlues history to win 30 games in one season. That mask was 👌 pic.twitter.com/AmJIRcgiuY

Who’s that guy in the blue mask? Oh, just Jim Rutherford guarding the #Pens net back in the 70s. pic.twitter.com/gIDqLSJFrw

The blue creeps me out, don’t know why.

Sleep with one eye open.