The website for The Scarlet Queen of Mercy is one slick production. Their old-fashioned gazette reads like a rolling good time. And hey, Dusty Flowerpot Cabaret has been featured at FUSE before – if masters of good taste like the Vancouver Art Gallery loved ’em, then so should you?

In The Scarlet Queen of Mercy, the audience are transported onto the set of the eponymous 1955 movie, and completely immersed in a marvellous Technicolor world. There will be vintage chorus lines, 1950’s film gear, original songs from heartthrob crooner Jack Garton, and plenty of behind the scenes drama.

Sadly, Scarlet is like going to that pretentious new restaurant that you knew would be overhyped, but totally fell for anyway.

Since Vancouver is such a foodie town, I’m going to compare and contrast this review with the hallmarks of a hipster new restaurant. Let’s begin with the positives.

There always seems to be lineups are around the block…
The seats were surprisingly packed for such an indie production at a random hall in Strathcona; Dusty Flowerpot Cabaret seems to have a very strong following, especially for so-called community theatre. One thing that DFC did very well was the ‘up-selling’ of VIP tickets for $10 more, which included table seating right up front and a bottle of wine to share. The rest of the seats were those wooden gymnasium ones, which certainly fit the no-frills hall but were plainly inadequate for the three hour duration (more on that later); they were also stacked in straight rows that really killed off any line-of-sight, the further back you got.

So that would be rule number one, similar to any hot new restaurant – book in advance or show up early. And if you can, go with the upgrade – it’s probably worth getting comfortable and slightly lubricated. 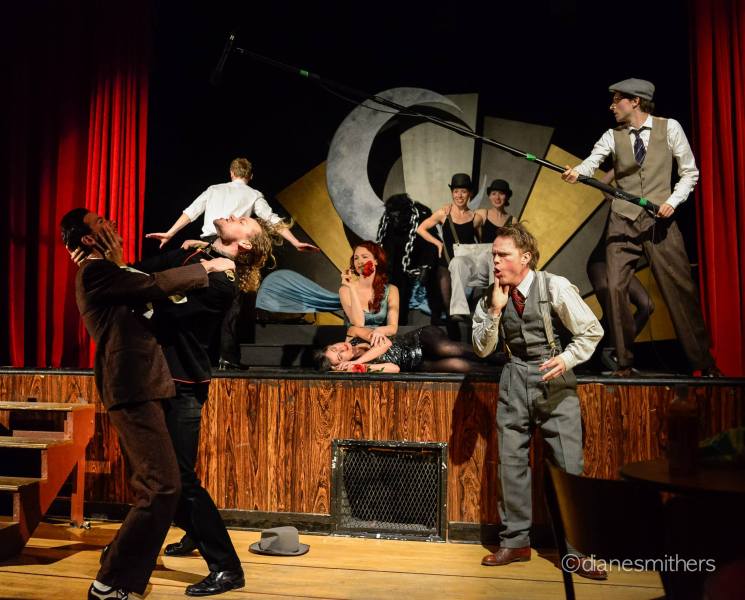 The space boasts reclaimed wood and kitschy decor…
The costumes of the extensive cast were both inventive and impressive, easily capturing an old-fashioned movie set. Some of the costumes might not have been historically accurate (I got the vibe of an earlier decade, maybe 1920’s?) but the overall look, combined with the array of sets around the audience, transformed the iconic-but-shabby Russian Hall into something more remarkable. I especially enjoyed Act II’s opening song, “Dancing With The Ghost of You”, featuring one very inventive ghost-in-a-sheet. 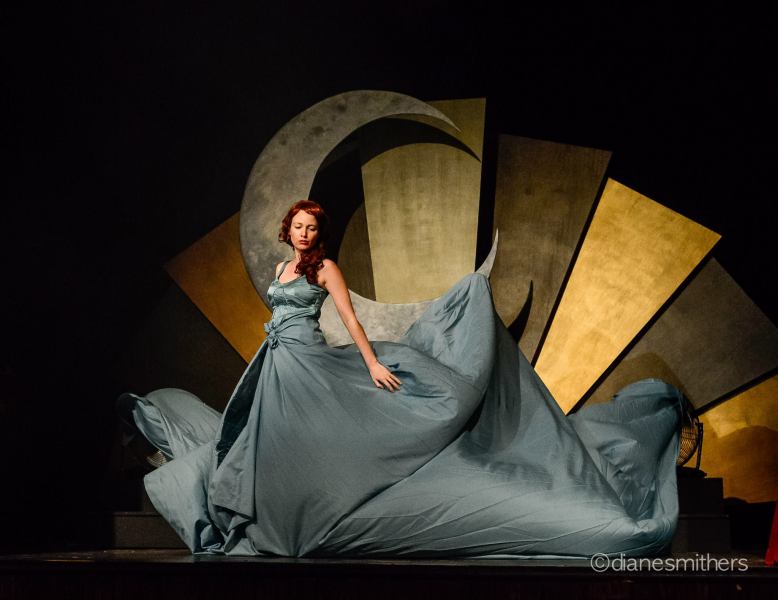 Big props to the props department, led by Art Director Rye Faliszewski. Just like celebrity architects are all the rage with new restaurant spaces, so too is theatre beginning to realize that innovative settings and attention to detail goes a long way in winning over audiences.

There were glimmers of genius in the chef’s execution…
The two leads, Karly Warkentin (leading lady) and Jack Garton (director), gave great performances, and sidekicks Patrick Kearns and Nathan Barrett were there to back them up on the comedic front. Regardless of the size of the role, all of the actors acquitted themselves well. The real problem was the size of the cast. Scarlet’s glossy program reveals that the cast list alone goes on for two solid pages, with extra characters pulled from the audience rounding up another nine mentions. 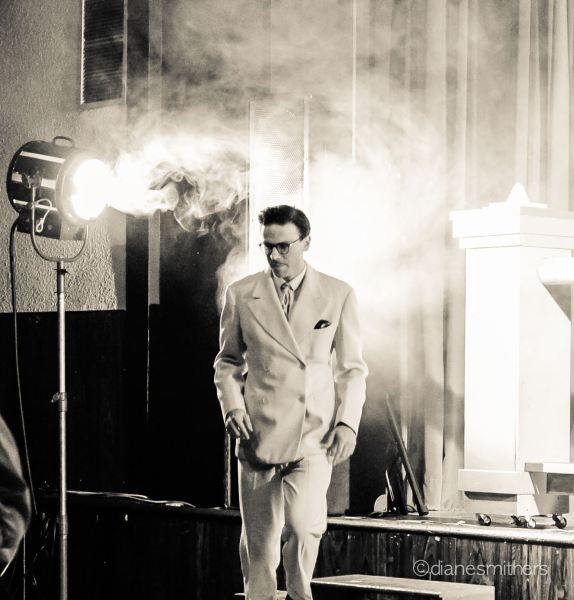 Herein lies the big problem with Scarlet – much like a fancy plate with too many different flavour profiles, the script is bloated, cumbersome, and falls flat under its own weight and potential. It’s a problem many young chefs have when they’re just starting out with something to prove, and I hope DFC can find it in themselves to trim further productions for the audience’s benefit.

The food takes too long and arrives cold…
The play was close to three hours long, consisting of two parts and an intermission. A classical love triangle taking place within the set of a “B movie” musical, there were so many subplots and sidenotes that it really hurt momentum. The first half was was a bit tighter, and probably would have been more than enough to prove DFC’s point. While the characters kept on proclaiming they had no time, as time is always money in the movie business, the pacing gradually wound to glacial levels.

I wanted to feel the thrill of show-biz, but somewhat frustratingly, ended up feeling exactly like an extra would on-set: lots of waiting around, not a lot of fun. 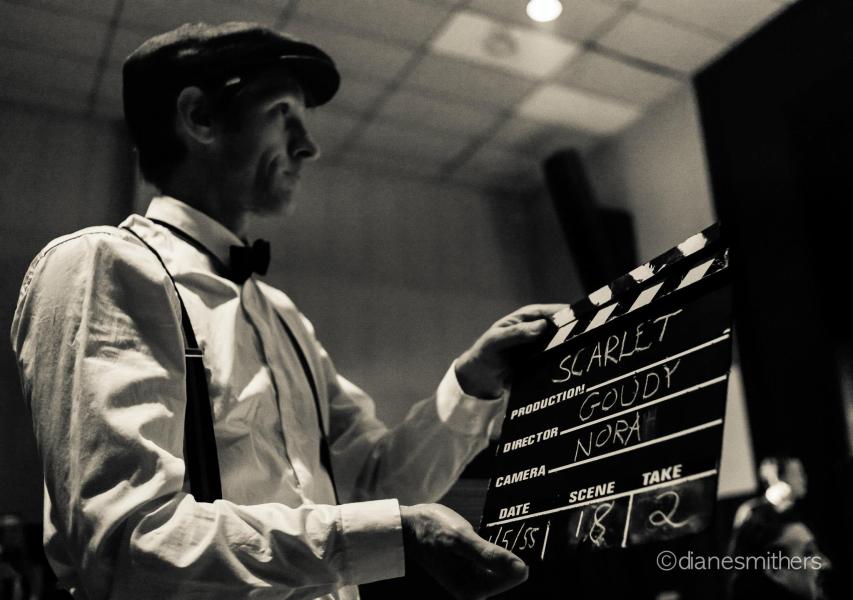 The restaurant leans too heavily on image without a lot of substance to back it up…
Funky brands. Artsy food posts on Instagram. Snarky servers with that I-don’t-give-a-sh*t flair. They’re all hallmarks of our new foodie culture, overused to the point of cliché. Every new joint is on a mission to out-cool its competitors, to the point where food is secondary and image is legendary.

I feel about the same about Scarlet. Pop culture references were everywhere, and tongue-in-cheek reminders about the innovative nature of the production came up at predictable intervals. But when these distractions take away the heart and focus of the show, then I’m left with the sense of too little substance stretched over too big of a plate. Again, an easy way of solving this would have been duration – clocking in at three hours for any production is a stretch, and the packed room got stuffier by each produced minute. Just like the movies, more things ending up on the cutting room floor would have helped Scarlet’s pacing and overall reception.

There is honeycomb/lavender/harissa over EVERYTHING…

DFC pulled out its signature audience participation tricks once too often, to the detriment of flow and story. I got a glimpse of DFC’s hallmarks back when they performed at FUSE – audience dress-up, slow-mo brawls, improvised parts. But once you’ve seen it before, there’s not much to keep audiences from coming up a second time, unless they really, really dig that kind of quirk.

While some on-the-spot casting worked well, others dragged on. As I mentioned previously, there were nine extras to be cast – nine. By the time we got to ‘the trial’ at the end of the second half, ripe with three audience extras, momentum was past dragging; it was completely dead. 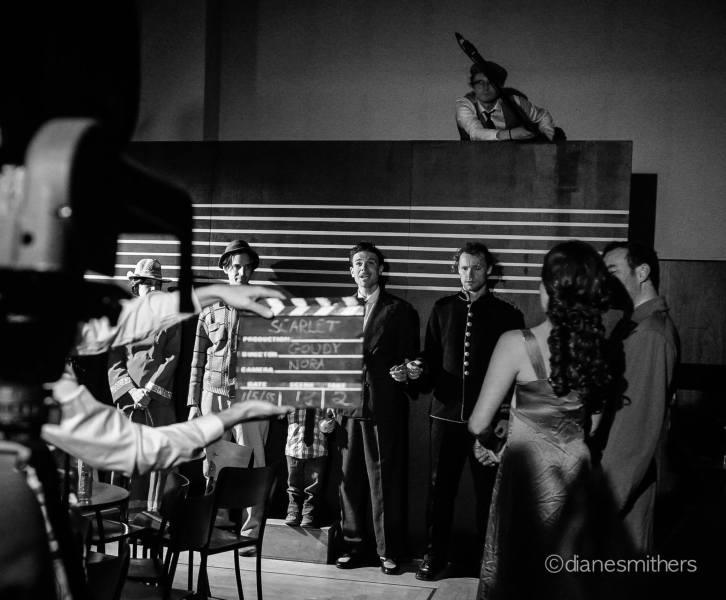 If this is the future of Vancouver theatre, then we’re in for one bumpy ride. Dusty Flowerpot Cabaret shows promise, but it’s an early, high-school-play kind of promise. I write this review fully recognizing the amount of care put into this production – a look at the extravagant, double-sided, 8-page program will tell you how much heart these up-and-comers have for their craft. I get it, and I think DFC has a chance to become a disruptive addition to the Vancouver theatre scene.

If you want innovation, there are many indie theatre companies out there that deliver with excellence. If you want a campy ride, then look to some of the indie comedy/nerdlesque shows in town. These companies don’t sacrifice the why of attending live productions merely for the flash and spectacle.

The Scarlet Queen of Mercy runs until May 31 at The Russian Hall. More information here.