Christmas is right around the corner, and that means the arrival of festivities like the annual Vancouver Christmas Market, the largest Christmas event in Vancouver, and the massive Santa Claus Parade.

The annual Santa Claus Parade attracts over 300,000 spectators to take in the holiday spirit downtown Vancouver. The parade features more than 3,500 participants who are engaged in 65 marching bands, choirs, festive floats, and community groups.

The parade is one of the largest food and fund raising events for the Greater Vancouver Food Bank Society. Since 2004, the parade has collected $132,400 and more than 73,500 lbs. of food for hungry families in the Lower Mainland.

On parade day, spectators are encouraged to bring a monetary or non-perishable food donation for the food bank. For each dollar donated, the food bank can purchase three dollars’ worth of food.

Location: The parade is in downtown Vancouver, located just blocks from the Burrard, City Centre, Granville and Waterfront SkyTrain stations.

Parade route: The 1.8 kilometre parade route starts at Georgia and Broughton, travels east on Georgia to Howe, turns south on Howe, and finishes at Howe and Davie. 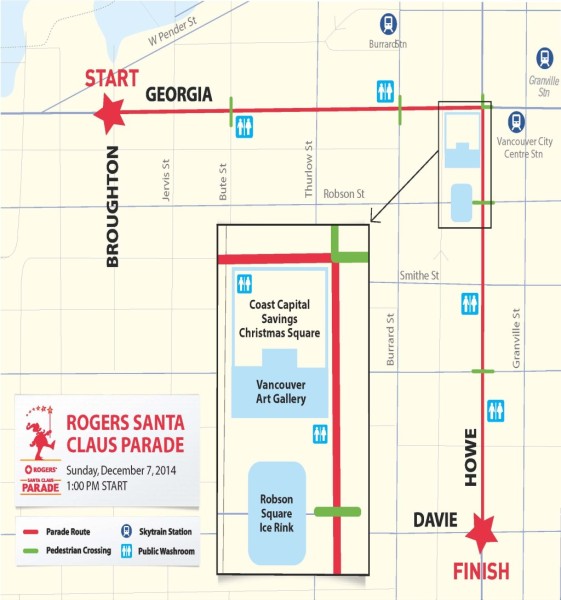