Having attended the last two years, I’ll definitely be checking it out  once again this year. The parade is definite hit with young and old and this years parade hopes to be bigger and better than last years. It’s estimated that over 300,000 people will watch the parade, making it one of the larger parades in the city.

The only thing I question is why the parade route does not go down Granville Street? Instead, parade organizers have chosen Howe Street. Especially with the ongoing renovations at Robson Square and Robson being a complete mess around there, I would have thought they would have rerouted to Granville Street.

Vancouverites will get a chance to see jolly old Saint Nick spread some Christmas cheer down the streets of Vancouver. You’ll also see many Christmas classic characters make an appearance, Frosty, Rudolph etc… My hope is that one day this parade incorporates large floats and balloons similar to the Macy’s Thanksgiving day parade in New York.

The 2010 Grand Marshalls are John Furlong, CEO, VANOC, The Honourable Mary McNeil, Minister of Citizens’ Services and past Minister of State for the Olympics, and the 2010 Winter Games volunteers.

PRE-PARADE FUN:
The festivities start at 11 am with two hours of family entertainment at the Coast Capital Savings Christmas Square in front of the Vancouver Art Gallery. (Showstage, face painting, Letters to Santa station)

Best Places to Watch The Vancouver Santa Claus Parade are:

However, this being such a long parade route there will be plenty of great viewing areas. 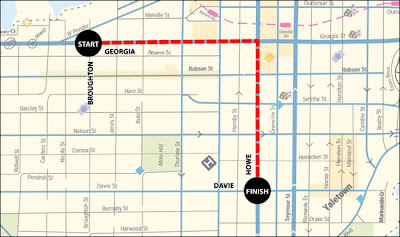 Here is a map to the road closure that will be in effect that day. Judging from previous experience shopping and driving downtown on parade day will be a night, so I suggest you leave your car at home and take transit. 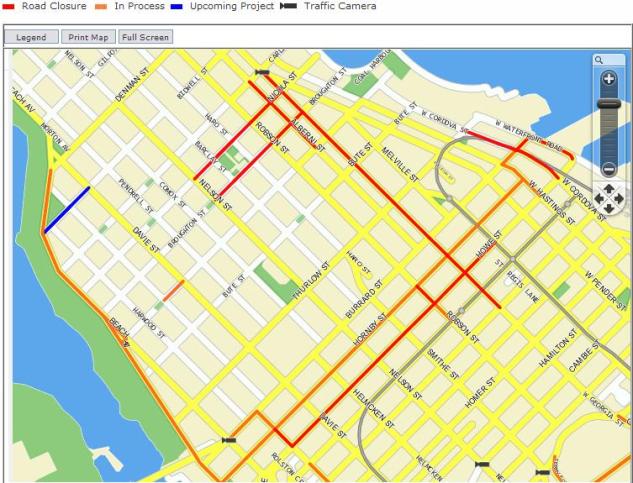 The following roads will be closed that day: