“If you target very specific needs, you get better results.”

The mission of Sanctuary for Kids is to improve the lives of children around the world who need protection and are in crisis – those who are exploited, dispossessed and threatened. S4K was founded by Amanda Tapping, Damian Kindler and Jill Bodie through their connection to the television series Sanctuary. With the incredible support of their fan base, and sci-fi community as a whole, S4K has been able to make personal, meaningful connections with people all around the world.

I chatted with Amanda about Sanctuary for Kids and the profound impact it has been able to make in the lives of children around the world in countries such as Nepal and Haiti, along with here at home in the Downtown Eastside.

Andres: For those who aren’t familiar with the charity, what is Sanctuary for Kids:

Amanda: Sanctuary for Kids has been a bit a of passion project. We started in 2009, just recently had a board meeting, and we’ve raised just over half a million dollars. We honestly never expected it to be this big, so we’re thrilled that we’ve raised as much money as we have. Our mandate is to helped children in crisis around the world, but pursuant to that is to work with small charities with very little over head where a small amount of money makes a huge amount of difference. We have hand picked the charities we are working with right now. And we didn’t want to just give money out, but wanted to create a relationship and find out what the needs were and how we can better serve those needs.

What types of charities are you working with right now?

Currently within Nepal, we primarily work with three different organizations: the Nepal Orphans Home, Asha Nepal and Next Generation Nepal. Nepal Orphans Home is obviously helping children. They provide housing, education, food, clothing and we have over 150 kids in the orphanage. Five of our children are going to college for the first time, which is super exciting. Next Generation Nepal is an organization that has been around for quite a while and they work with trafficked children. Part of their mandate is to reunify these children with their families, but also to provide safe housing and education, and the very first boy who was rescued by Next Generation Nepal is now going to college, which is a huge step forward. And Asha Nepal works with trafficked women, who are sold into the sex trade primarily in India, and getting them back into Nepal and reunified with their families along with having an education and helping them create a life for themselves. 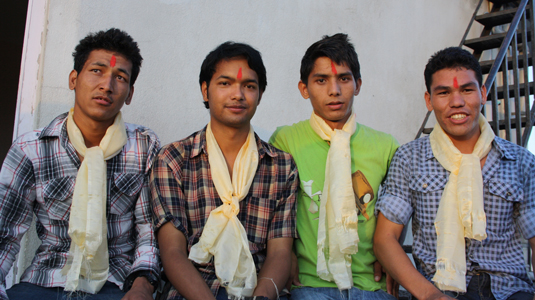 Locally here in Vancouver, I’m really proud of the work we’re doing with Watari, which is an amazing organization in the Downtown Eastside which gets youth in crisis off the streets and transitions them into housing and education and they have a step two program which is working with teens with children. The first thing we offered them was a Breaking Down Barriers Fund. When you’re on a very fixed income, a bus pass can be very expensive. Extra classes, tools for a trade, steel toed boots, a hard hat – are all things they wouldn’t be able to afford, not to mention the bus pass to get them to those jobs as well. And now part of the money we’ve recently given them is directly paying for the outreach workers who are going through the Downtown Eastside at night and getting these kids off the streets. It’s such a well-run organization. They do have some assistance from the government but certainly not enough to keep them going. It’s a volunteer board of directors. They offer counseling and so much for getting kids off the street and out of that life style and transitioning them into a more productive life, and one where they feel as though they have some self worth.

We’ve kept Sanctuary for Kids relatively small, but it makes a difference. In the orphanage for example, part of our fund went towards upgrading the food to the best quality rice, more fruit and vegetables, and more protein and meat. Subsequently, in the very short time that we started that initiative, their pharmaceutical was down by 70 per cent. And the kids had more energy and were doing better in school, and it is simple things like that in which slightly upgrading the nutrition changes things considerably. Again, this is one of the benefits of working directly and finding out what their needs are. Michael Heft, the gentle man that runs the Nepal Orphans Home, said that instead of us providing vitamins, why don’t we upgrade their food. 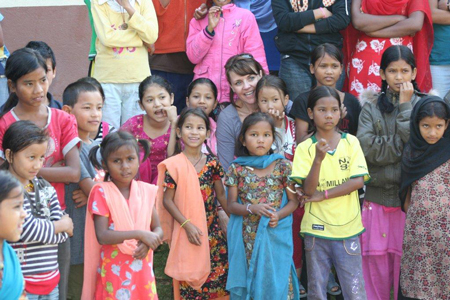 Similarly, when Jill Brodie and I were able to visit Nepal a few years ago, we brought crank lanterns, so that when they have rolling black outs during much of their 18 hours days, they can still actually do their homework. So it’s a small step, but one of our phrases is “little ripples make big waves”, and its kinda true. You drop a pebble in a pond and the ripples emanate. I’m incredibly proud of it, but its due to the fan base that we’ve been able to raise the money that we’ve raised. They’re so committed and have been so phenomenal. They’ve created their own little initiatives, such as “I’m going on a 5km hike and anyone that wants to sponsor me, the money is going to Sanctuary for Kids”, or “I’m going to lose weight and if I lose so many pounds, sponsor me.” It’s those tiny little grassroots initiatives that are making the difference. It’s definitely a really feel-good organization.

Targeting specific needs rather than simply sending money to countries has clearly been more effective.

Absolutely! In Haiti, where we also work, so much money was sent there after the earthquake, but it’s a matter of how to distribute it.

It doesn’t trickle down.

It doesn’t, and millions of dollars are still sitting there, waiting to be spent. One of our groups is working in a specific village and they’re about feeding and educating. Ya, if you target very specific needs, you get better results.

For more information about Sanctuary for Kids, please visit their website www.sanctuaryforkids.org

Images by Nepal Orphans Home and Sanctuary for Kids.