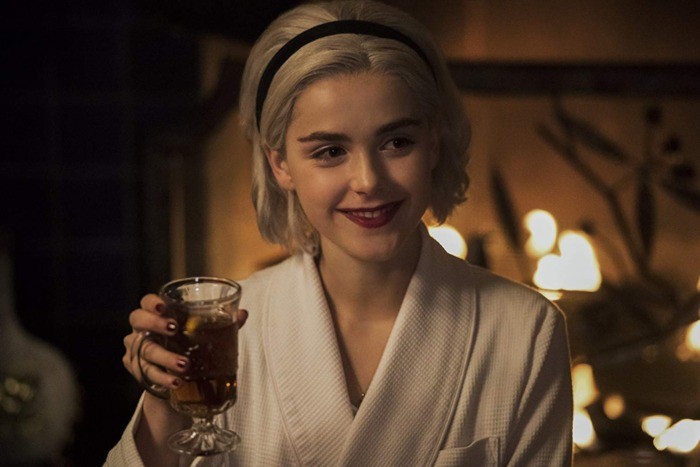 Who says horror is just for Halloween?

The Chilling Adventures of Sabrina: A Midwinter’s Tale was just released on Netflix, so take a break from all the Christmas cheer, and get ready for a much darker take on the holidays.

Many of our favourite shows have a few holiday episodes that we fondly watch throughout the month of December, but this episode isn’t like the holiday specials you’re used to seeing.

On a show where witchcraft, murder, and invoking the help of satan are common practice, their take on a Christmas episode is a little less jolly than most.

The Chilling Adventures of Sabrina just aired its first season before Halloween, and fans weren’t expecting anything new until Season 2 comes out in April 2019. The new episode was just released on Netflix at midnight, giving fans the perfect early Christmas present.

The special is about the Spellmans, as well as the rest of the witches and warlocks in Greendale, getting ready for the Winter Solstice, while Sabrina’s human friends celebrate Christmas.

The episode most likely won’t have many season two hints, but will be a standalone episode, focusing on the group trying to defeat some sort of evil being that has made its way into their world. Although, there has been mention of Sabrina’s mom being in the episode, perhaps in flashback form.

The Chilling Adventures of Sabrina: A Midwinter’s Tale / Facebook

This trailer has enough dark moments in it to hopefully hold us over until the Season 2. Expect to see some creepy elves, and a not-so-sweet Santa who may have something other than toys in that red sack. You can’t forget the Spellman’s door that had a wreath adorned with a pentagram in the centre. We also caught a glimpse of a demon, what may be a ghost (of Christmas past, perhaps?), as well as someone, possibly the same demon, covered in wax, with candles dripping from their hands.

Fire up your Netflix, and get ready for a night in with The Chilling Adventures of Sabrina: A Midwinter’s Tale.