Nerds rejoice! Canadian idols Rush are coming to Vancouver as part of their R40 Live tour on July 17. It’s been 40 years since the prog rockers first played our city on their Caress of Steel tour, and rumour has it this trek may be their last big one. Lead singer Geddy Lee says that talk of future touring amongst the trio is “in flux” and said “the other guys do have doubts, and they have other demands on their lives that I don’t have.”

Rush continues to sell out arenas despite not having a hit single in decades, and it’s no surprise that tickets for Friday night’s show are selling briskly. And as indicated by our setlist preview, the band will run through their catalogue backwards, which means the second half of the night will be mostly comprised of their groundbreaking ’70s output.

But before the iconic group rocks the Rogers Arena stage, we’ve crunched their numbers and come up with some pretty interesting stuff. Nothing important – just random trivia to impress your friends and annoy your co-workers with. Ready? 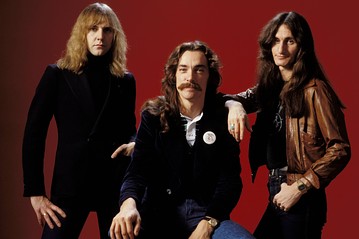 1981’s Moving Pictures is the band’s biggest record, selling more than 4 million copies in the US alone.

In addition to Friday night’s show at Rogers Arena, the group has played the Pacific Coliseum several times and even played the PNE Gardens during 1976’s All The World’s A Stage Tour.

Or at least that’s what Geddy Lee thought. When the R40 Tour kicked off in Tulsa, Lee announced that the band had never played the track in front of an audience before. Twitter quickly exploded, with know-it-all fans pointing out that a live version of the song had been included on 1981’s Exit…Stage Left album. After googling Rush trivia on his phone after the show, Lee admitted he’d make a mistake. “I fucked up,” he said. “I have no memory of ever playing ‘Jacob’s Ladder.'”

26 – number of different basses Geddy Lee is playing on tour.

Lee bought his first bass, a Canora, with $30 he earned working in his mother’s variety store.

0 – number of Grammy Awards won by the band.

In other words, the Baha Men, Barack Obama and the Chipmunks have won more trophies than Rush. THE BAHA MEN, people. The prestigious list of performers who have yet to win a Grammy includes Queen, Jimi Hendrix, Tupac Shakur and Katy Perry.

Their first came in 1975 when they took home the “Most Promising Group of the Year” prize. 2012’s Clockwork Angels won the “Rock Album of the Year” trophy.

Peart is considered a legend in famous circles as well: Stewart Copeland of The Police called him “the most air-drummed-to drummer of all time”, and Foo Fighter Dave Grohl confessed to breaking down in tears after their first meeting.

80 – per cent Rush’s music written in a weed haze, according to Lifeson.

“I find that smoking pot can be a really great creative agent,” he told Rolling Stone, “but when you’re in the studio and you’re playing, it’s sloppy.”

After being snubbed for years, Rush were finally inducted into the R&RHOF in 2013. But unbeknownst to his bandmates, Lifeson prepared a two-and-a-half minute speech comprised of only “blah blah blah”s as a way to explain the band’s surprised reaction to their induction. Lifeson has no regrets about his decision and told Rolling Stone magazine that “it’s the fucking Rock & Roll Hall of Fame! You should be irreverent, rather than thank your lawyer and your accountant and all that bullshit.”

Peart is a known perfectionist and used the time to practice on two different drum kits that he’ll play onstage. Guitarist Lifeson rehearsed by strumming along to old Rush albums spinning in his home studio.

2,153 – amount, in US dollars, a front row ticket for Friday night’s show is going for on StubHub.

Good luck getting rid of that, pal. Plenty of $43 balcony seats are still available here. 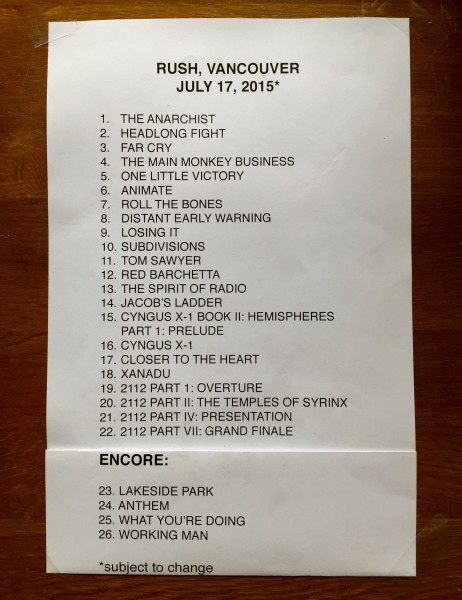