As the Canucks get set to face the mighty Kings and Ducks this weekend, there are a few things on my mind.

Welcome back to Rumours and Revelations, the article where I rant about a bunch of random things going on with the Canucks, the NHL, the media or anywhere else.

Through 11 games, Ryan Miller has been a really nice story for the Canucks. He is 10-1 with a .920 SV%. We’ll never know how Eddie Lack would have performed if Benning gave him the keys this year, but it would take a real optimistic thinker to believe it would have been this good.

Bieksa has had a horrid start to the season. He is giving them nothing offensively (0 goals and 1 assist in 14 games) and has been a liability in his own zone. His recent eye injury is almost certainly not helping him at the moment, but don’t forget that he also started the season with an undisclosed injury that he played through. Lets hope Bieksa is able to get healthy at some point because the Canucks’ defence corps simply isn’t deep enough to excel with a subpar Bieksa.

Some hilarious news broke about the Canucks next opponent, the Los Angeles Kings, on Friday night.

The #LAKings will only have five defencemen vs. #canucks tomorrow because they are short $160 in cap space to call someone up. What a world.

If the game was Sunday, rather than tomorrow, the #LAKings would have enough cap space to recall a defenceman.

Notable part of #LAKings cap issue is that it's a totally unprecedented situation since Voynov is suspended with pay. Can't fault team/NHL.

Slava Voynov, he of the $4.167 million cap hit, was suspended indefinitely last month, after he was charged for domestic violence. Good news for the Canucks.

The Green Men announced on Friday that they won’t be continuing their act at Canucks games after this season. I’ve really got to hand it to them. ‘Force’ and ‘Sully’ really carved a niche for themselves and entertained fans in a unique way for way longer than I thought possible. Whenever I started to become bored of their act, they would come up with something new (ie. handstand, signs, waffles, etc.) to spice things up. 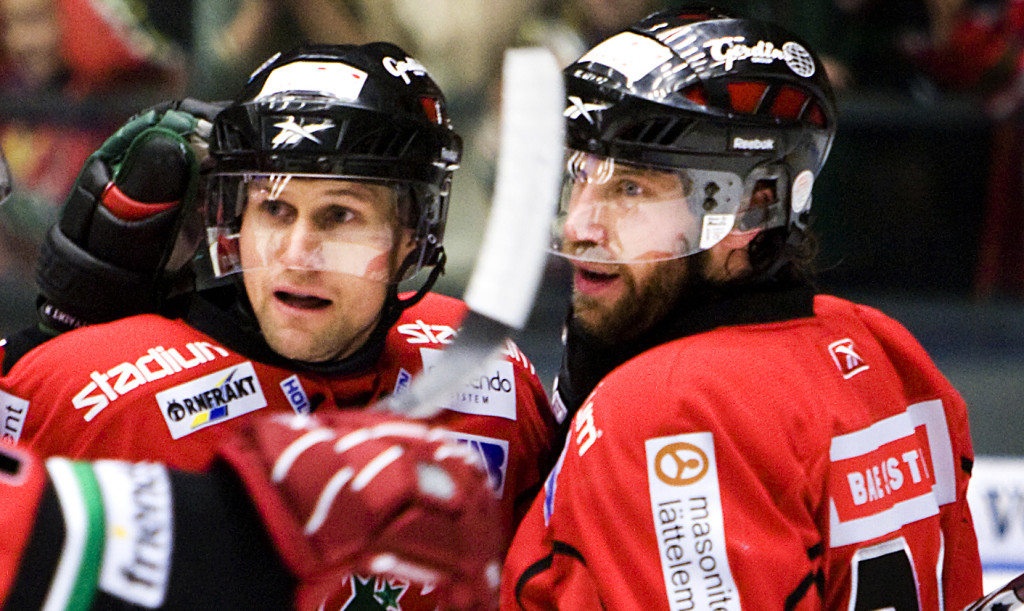 NHL jerseys won’t be advertisement-free for much longer, according to NHL chief operating officer John Collins. Many people will be outraged by this when the time comes and I will be too, but it likely won’t be as bad as you think. Think CFL jersey ads, rather than Swedish Elite League jersey ads. 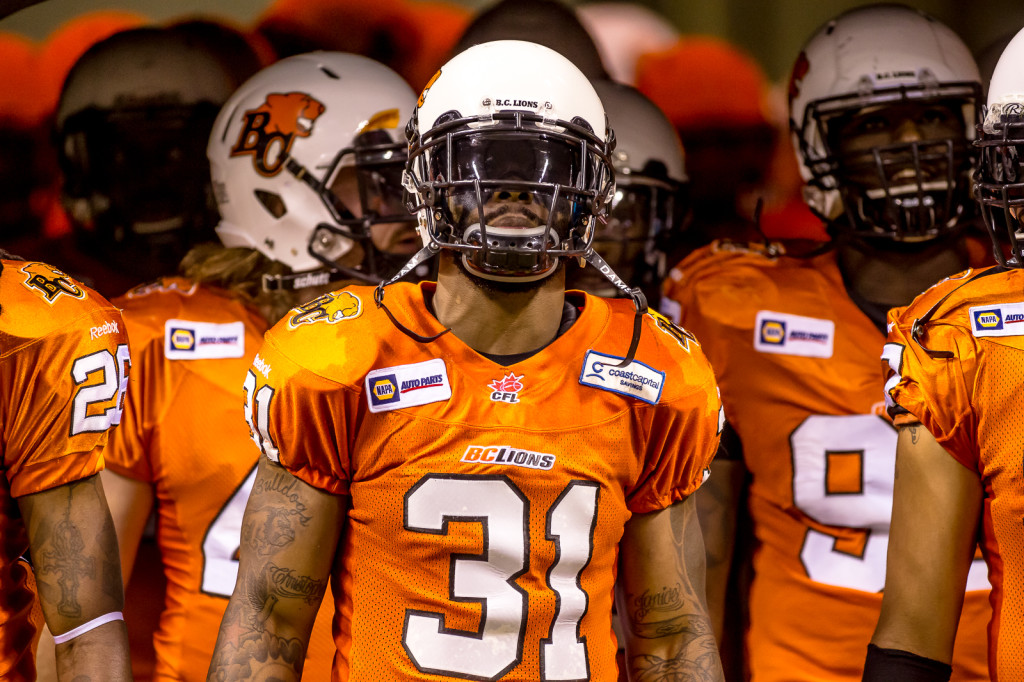 What they should try first is putting ads on referees jerseys like they do at the Spengler Cup: 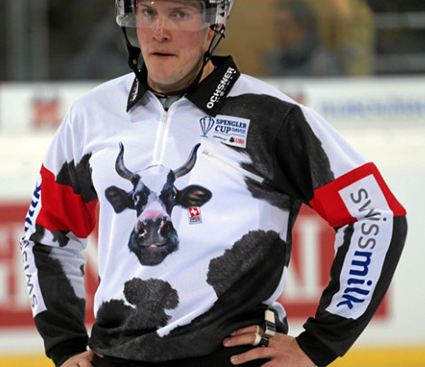 Just in case you forgot.

Again with the goal song

This has become somewhat of a mini crusade for yours truly, but the Canucks really need to change their goal song. Want more proof? The Buffalo Sabres are using the same song. So now the song isn’t even unique.

Also, a source I trust tells me the Canucks players don’t like the song either. 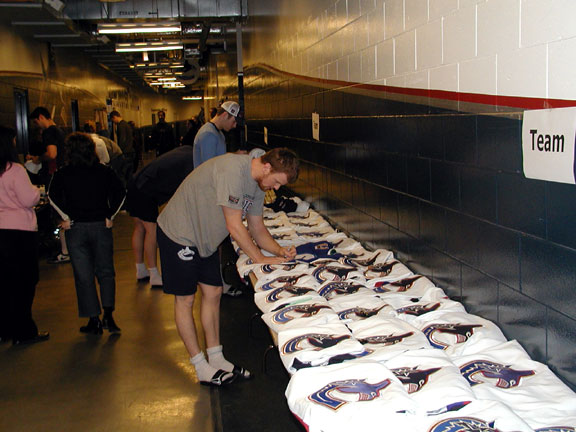 Shortly before the start of the 2006-07 season, the Canucks had just finished practice while some of the Canucks staff and myself waited for the team in the media room. It was team signing day. Team signing day is the day where the Canucks team sign just about everything. Jerseys, sticks, pictures, etc. to be used throughout the year. That’s how they get all those “team signed jerseys” for prizes, charity events and whatnot. 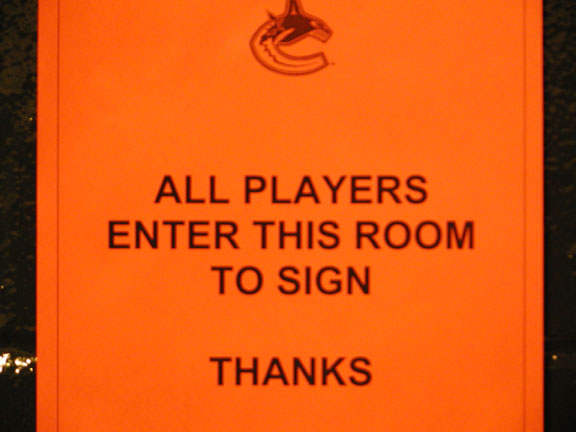 The hallway in the bowels of GM Place was filled with team signed stuff, while the media room was filled with things to sign for individuals. Every player got their own allotment of stuff to sign (Naslund, Linden and Luongo had the most to sign, Rory Fitzpatrick and Josh Green not so much). I was assigned to meet these players as they came in the door and show them to their table. I had a few interesting players, both Sedins, Kevin Bieksa, etc. I was also given all of the new players that nobody else would be able to identify.

So now was the time to identify these players as they came through the door. First player in: Henrik Sedin. I took him to his table and told him a joke. He laughed politely. Henrik left the room and we waited for the next player. In walked Henrik Sedin again with a puzzled look on his face… oh crap wait a minute, that’s Daniel! I couldn’t tell them apart back then. I took him to his table, told him the exact same joke as Henrik and he laughed politely in the exact same way.

I remember trying to joke with Matt Cooke also, but he didn’t laugh. Must have a bad sense of humour or something.