The Canucks will enter the NHL All-Star break with a 26-16-3 record, good enough for 2nd place in the Pacific Division and 6th in the Western Conference. The Canucks are performing at about the level we should have expected at the beginning of the season, if not a little bit better than expected. Most people pegged the Canucks as a team that would finish anywhere from 6th to 10th place in the conference, putting them as a bubble team to make the playoffs.

In all likelihood, the Kings and Sharks will get it together and finish 2-3 in the Pacific while the Canucks will be in a battle with Winnipeg, Calgary, Dallas, Colorado and Minnesota to make the playoffs. And I like their chances. 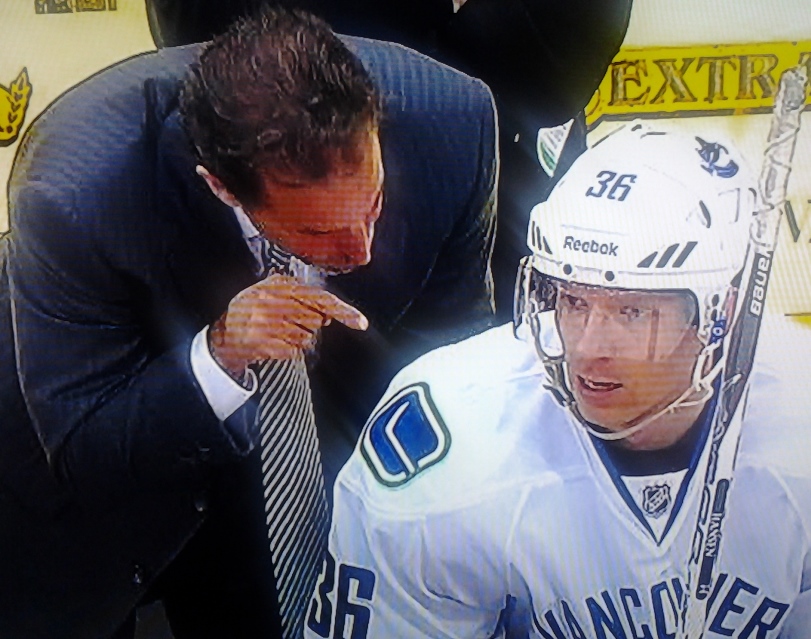 It’s interesting to note that the Canucks had the exact same number of points (55) at this point in the season last year under Torts. That should be an acknowledgement of how much the Canucks accomplished in the first half of last year, rather than some sort of warning of impending doom, although nothing should surprise fans of this franchise.

As long as the Canucks don’t fall off a cliff like they did last year, these comparisons will start fading from mention. The Canucks lost 5 in a row leading into game 45 last season and then 4-11-0 in their next 15. 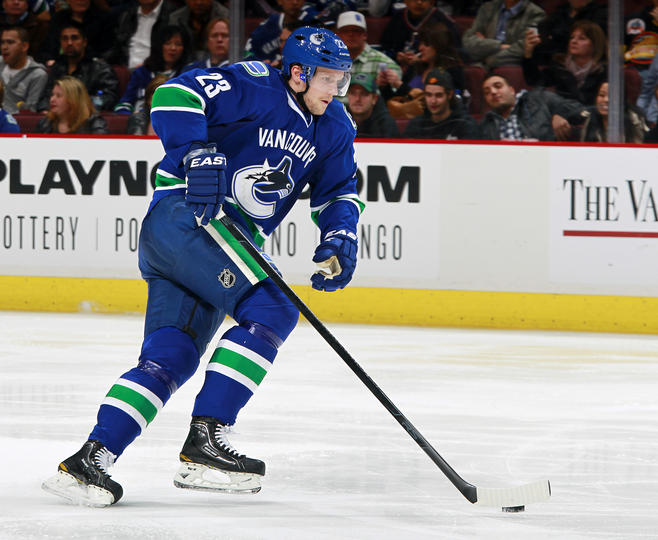 For my money, the Canucks first half MVP is Alex Edler.

At over 24 minutes/game, Edler plays more than any other Canucks player. The next closest Canuck, Kevin Bieksa, plays 3 minutes fewer than Edler. And in that time, Edler has excelled. He has the best even strength Corsi For %, significant because he plays against the opponent’s best players every game. He, along with partner defence partner Chris Tanev, is the reason why top players aren’t racking up points against the Canucks.

Edler looks confident and is playing physical again. His point totals, just 15 points in 45 games, aren’t where he’d like them to be but his value in the defensive zone has been huge.

This has been a remarkable turnaround for the d-man who looked like a lost puppy for most of last season, often paired up (against all logic) with Kevin Bieksa.

Speaking of Bieksa, it looks like the Canucks may be without him a little while. The shot he took off his hand in the game in Tampa Bay did not look good and I would bet that he Canucks blueliner has a broken hand. With Bieksa out of the lineup, we are going to get a reminder of how valuable he really is, which is a bone of contention with a lot of Canucks fans.

With Dan Hamhuis out of the lineup, Bieksa has been forced to play with the likes of Ryan Stanton and Luca Sbisa of late, and his play has suffered. Should that be an indictment of Bieksa, who doesn’t lift his partners to new heights, or just a reasonable expectation for a guy playing with inferior defencemen against tough competition?

Either way, it’s beginning to feel like Bieksa doesn’t play well with anyone not named Dan Hamhuis.

"It's okay Kevin, I'll be back soon." pic.twitter.com/z38gdLuFJ9

Bad news for Kevin Bieksa is good news for fellow right-handed defenceman Frank Corrado, who got the news that he will stay with the Canucks over the NHL All-Star break.

Corrado sticking with team (so he gets a break) but no update on Bieksa. #canucks

The move to keep Corrado while the Canucks don’t play for a week is a bit of a head scratching move in a season full of head scratchers concerning Corrado. The Canucks don’t play another game until January 27, while the Utica Comets will play three in that time. It would have made a lot of sense to send Corrado back to the AHL to play on Friday and Saturday, then return him to Vancouver for their game on Tuesday.

Corrado has spent a lot of time in the Canucks press box this season, an odd move for their most capable young defenceman. Call me crazy, but I believe the best way to develop a young defenceman is to play him. Corrado is exactly the type of defenceman the Canucks need in the lineup right now as Vancouver tries to rebuild on the fly.

Corrado has looked good in his 4 games with the Canucks this season and certainly warrants an extended look. Certainly, he should be in the lineup for as long as Kevin Bieksa is injured.

As Jason Botchford pointed out in the Provies on Tuesday night, Chris Tanev injured Canucks forward Brad Richardson with a shot to the leg in Carolina, the same rink in which he broke Alex Burrows’ jaw on a clearing attempt last season.

Count me as one who never thought Tanev’s shot could break a pane of glass, never mind be capable of injuring teammates. 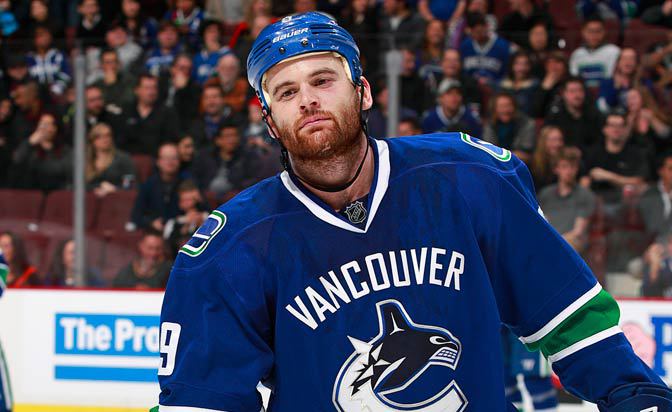 Ah yes, Zack Kassian. It wouldn’t be a ‘Rumours and Revelations’ without the most talked about Canuck.

Kassian has been at the centre of most Canucks trade rumours recently (most of them involving Boston), but unfortunately his trade value is probably at an all-time low. When kept out of the lineup a few extra games following an injury, Kassian was talking tough:

#Canucks Kassian: 'when I get my chance, I'm not going to come out (of the line up). I can tell you that.'

That was music to my ears, but this wasn’t:

#Canucks Kassian on 1st period hit on Tavares: 'just trying to be physical. Make everyone happy.'

This sounds an awful lot like a player feeling sorry for himself and I’m not exactly sure why.

If you’re unhappy with your situation, go and do something about it. The coaching staff would likely be pretty happy with some offensive production or physical play. Do either one of those things or a combination of the two consistently and he’ll never be a healthy scratch and he’ll get all of the opportunities in the world.

Kassian: "I laid an egg in Nashville"

Those are his own words. Kassian was a healthy scratch after the Nashville game but got a wonderful opportunity to play on a line with Nick Bonino after Brad Richardson’s injury. In two games with Bonino, Kassian had one good period of hockey, 0 points and 2 shots on goal. Basically, he laid another egg.

On the season, Kassian has just 5 points in 24 games, which ranks hims lower than Ryan Stanton in points and tied in goals with Luca Sbisa. 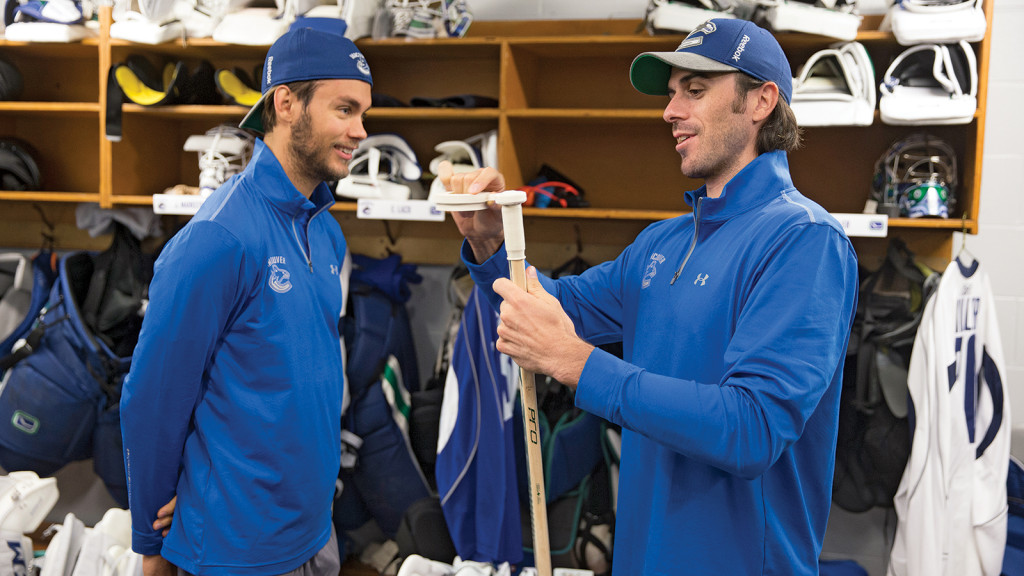 Another story that isn’t likely to go away anytime soon is the possibility of trading Eddie Lack.

With Jacob Markstrom playing great in the AHL and Ryan Miller finally finding his form, a backup like Eddie Lack might be a luxury the Canucks can’t afford to keep. Markstrom is an RFA and will not clear waivers again next season and Lack will be a UFA in a year’s time. Sooner or later the Canucks will need to make a decision on the two Swedish goalies or risk losing one or both for nothing.

Minnesota was the team most in need of goaltending, but they seemed to have already plugged that hole with Devan Dubnyk. So who else might be looking for Lack? Some teams to look at are teams who have pending UFA goalies like Edmonton, Buffalo and San Jose. A tandem of Lack/Scrivens, Lack/Enroth or Lack/Stalock might make some sense for those teams next season. 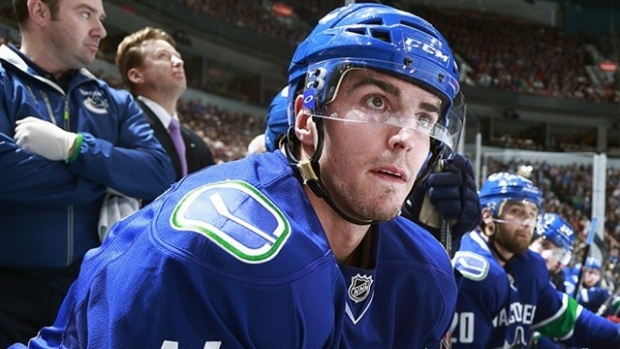 Are Alex Burrows reputation calls a thing of the past? It certainly feels like it this year. Burrows has just 28 PIMs in 40 games, which is the lowest of his career. For years since 2011, it seems that Burrows has been looked at very closely by referees, often giving him penalties because of his reputation. The reality, of course, is that Burrows has cleaned up his game a lot since 2011 and was never a cheap shot artist.

So what changed this year? Are refs finally seeing the light? Or is that light just the glow of Trevor Linden’s solid gold reputation? Either way, it’s nice to see.

And finally, happy birthday to legendary Canucks broadcaster Jim Robson who turned 80 years old this week. Canucks fans haven’t been spoiled with a lot of wins in the 45 year history of the club, but we have been spoiled when it comes to play-by-play broadcasters.