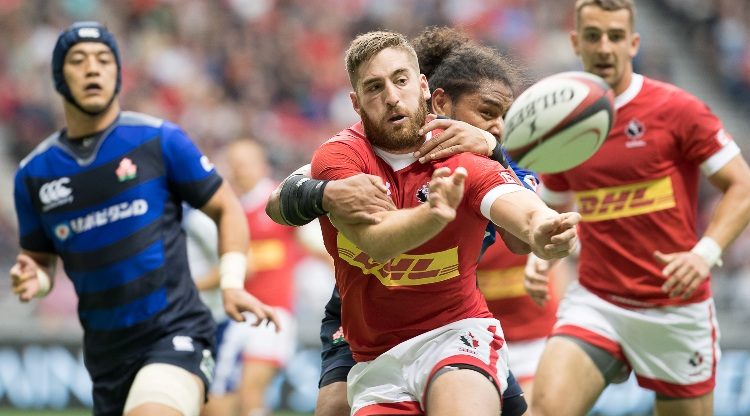 It’s been an interesting year for top-level rugby in Canada.

This past weekend, Canada’s senior men’s team played their first ever international test match at BC Place in Vancouver against Japan. While the crowd of 10,000 fans was smaller than organizers had hoped for, those who did attend were treated to an exciting finish to the match, with the Brave Blossoms hanging on to beat Canada by a score of 26-22.

With time running out and trailing Japan by 4 points, Canada turned up the heat. Several minutes of intense pressure by Canada culminated with Djustice Sears-Duru being denied the winning try when he was stopped at the Japanese try line. The fairy tale come-from-behind win on home soil for Canada was not to be, and it was an unsatisfying end to the XV’s debut in Vancouver’s biggest sporting venue.

“We are so frustrated. To play as well as we did and still come out losers is heart breaking for us,” Canada captain Jamie Cudmore lamented after the match.

Losing the test match to Japan was disappointing, but the bigger picture for top-level rugby on the local, and national stage, is much brighter.

Last March over 60,000 people packed BC Place stadium over the course of two days for the inaugural HSBC Vancouver Sevens. The tournament was won by New Zealand, but Vancouver fans went home happy after watching Canada dramatically beat France in the Bowl Final on the second day of the event.

Being able to watch top-level rugby matches in person is crucial to helping growing the sport here in British Columbia. The number of registered rugby players in the province has levelled off, but Dean Murten, who is the Performance Development Manager for the BC Rugby Union, believes events like the Canada-Japan test match and the Vancouver Sevens are crucial to continue growing the game.

“We have to stop targeting the rugby audience and start targeting the non-rugby people,” Murten told Daily Hive. “We have a lot to offer. If we can get the athletes, parents, and kids involved then the game can continue to grow, but we have to have successful events like we had today in order to do so.”

Rugby’s debut at the upcoming Summer Olympics in Rio de Janeiro could stimulate further interest in the sport. The Canadian Men’s Sevens team, who are currently ranked 13th in the world, are on the verge of qualifying for the Olympics. Their fate will be determined this coming weekend at the winner-take-all Olympic repechage in Monaco. However, the men’s team would be a long shot for a medal should they make it to Brazil.

The Canadian Women’s Sevens team, on the other hand, have already qualified for the Summer Games, and are considered heavy favourites to win a medal in Rio.

In addition to the top-level rugby being played at big venues across Canada, including BC Place in Vancouver and BMO Field in Toronto, the new PRO Rugby North America league started play earlier this spring.

The fledging league is North America’s first professional rugby union league, and is home to Canadian internationals Phil Mackenzie, Ray Barkwill, and Hubert Buydens. The trio has collectively played for Canada more than 100 times, including the 2011 and 2015 Rugby World Cups. While PRO Rugby North America is currently located in just a handful of US cities including San Francisco, San Diego, and Denver, there are plans to continue expansion, possibly for the 2017 season.

“I liken PRO Rugby to Major League Soccer 15 or 20 years ago,” said Cudmore. “MLS was just in it’s infancy then and people weren’t really behind it, but you look at it now – it’s huge. I really hope that rugby can do the same thing in North America.”

While the sport is starting to percolate into the mainstream sporting consciousness across the country, those working behind the scenes at the provincial and local level are doing all they can to grow the game.

While the overall growth and popularity, both at the club and national level, remains to be seen, 2016 has been a year where Canadian rugby stepped out of the shadows to claim a spot in the larger sporting scene.

“The success of the Sevens in March was amazing, and seeing all these fans out today was huge,” said Cudmore. “To play in venues like BC Place is exactly what we need. If we can get the XV’s and Sevens playing here more regularly I think the fans are really going to get behind it.”