One man’s trash may well be another man’s treasure, but one Vancouver chef is aiming to illustrate that what some might consider food for the garbage can actually be anyone’s delicious dinner.

With a series of two upcoming dinners showcasing under-utilized food scraps and off cuts, Dave Gunawan is taking sustainable dining to a whole new level at Royal Dinette for his Ugly Duckling evenings. 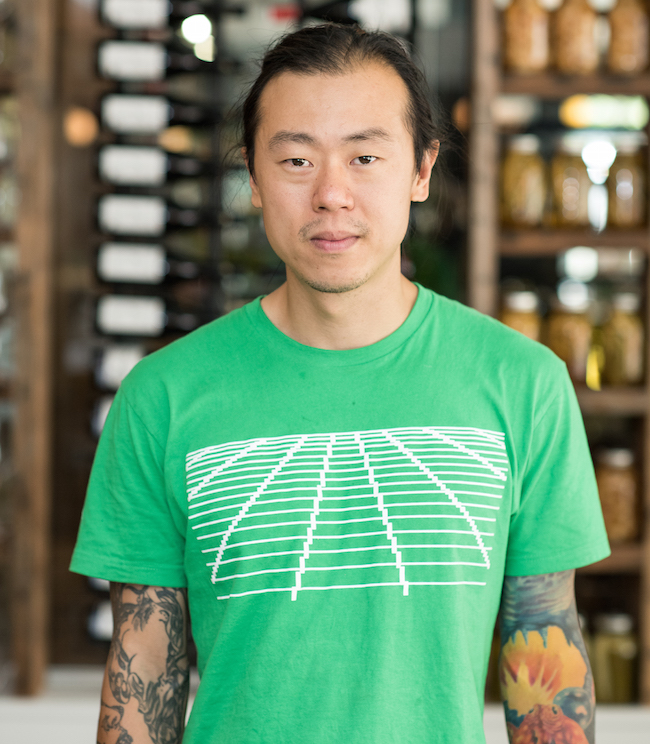 Gunawan, who is also behind the award-winning Farmer’s Apprentice restaurant and its sister-spot, wine bar Grapes & Soda, has become one of Vancouver’s most high-profile chefs in the sustainable cooking movement, though thanks to his food philosophy and culinary training, working, as the buzz words go, “nose-to-tail” and “farm-to-table” are more innate than on trend.

Using the whole animal, or minimizing food waste has “always been a practice at all my restaurants,” Gunawan explains during a sit-down chat inside Royal Dinette. The chef remembers very clearly in his earlier years in kitchens working under chefs who would be angered by a wasted piece of meat. While that anger was driven by the economics of running a restaurant, Gunawan says that low-waste cooking now stems more from a culinary philosophy.

The Ugly Duckling Dinners represent more of what Gunawan does on a regular basis, but are being packaged as more of a spotlight to emphasize a point. As for the food, think coffee grounds turned into a richly-flavoured caramel sauce atop an ice cream made of potato peels, or cauliflower ends transformed into a soufflé, with a thick sauce made of the oft-discarded ends of cheese. Nothing terribly exotic or cerebral.

“We’re using the familiar to convey the message,” remarks Gunawan.

It’s the message that’s crucial when it comes to cooking while mindful of waste. Gunawan says chefs may assume that everyone who puts meals on the table at home knows the basics of roasting a chicken–and getting the most out of said chicken–the reality is we’re heavily influenced by the visual appeal of ingredients, and not necessarily inclined to think about using more of the animal or produce in our kitchens. The Ugly Duckling Dinners, then, let Gunawan and his team at Royal Dinette, turn up the volume on the food stories they regularly tell.

Seeing the potential in an ingredient is a roots-up matter for Gunawan. “It comes from the notion of respect. When you’ve been to [the farm] you actually gain a deeper understanding of how difficult it is to grow stuff,” he elaborates. “It’s not just about buying stuff and throwing it out, or buying stuff and cooking with it. There’s actually a connection. You understand, you have that understanding about what it takes to grow, and the energy behind all of that and what it takes takes to bring it to the restaurant. when you associate yourself with an ingredient in that manner, you tend to not waste it.”

Cooking this way, attests Gunawan “forces us to be more introspective,” including showing respect for animals who have died to become our food. “It’s not a really a new way of thinking, it’s about a connection and a deeper understanding of the ingredient,” Gunawan points out.

Still, that deeper understanding may not be present in home kitchens, grocery stores, and restaurants across Vancouver, where consumers are making selections based on appearances. “We’re so molded by the social perception of what is perfect, how a vegetable should look,” observes Gunawan. “We are more concerned with the aesthetic value rather than the intrinsic property of our ingredients.”

So Gunawan and the kitchen team at Royal Dinette, including Head Chef Jack Chen, take the shells of English peas and juice them, and turn that liquid into vinaigrettes, or a granita. The end result, says Gunawan, has a fresh, grassy flavour. They are taking the undesirable cooking liquid from octopus and are turning into a Bouillabaisse-inspired soup enhanced with various veggies, seasonings, and stock from fish bones–another kind of scrap.

“Being a very expensive city we definitely can use a bit more of that kind of austerity mindset–being more conscientious about our purchases, utilizing everything we buy, planning it better so we don’t waste more money than we have to,” notes Gunawan.

Turning “yuck” into “yum” is par for the course, but Gunawan is still being thoughtful about the approachability and affordability of a special event like his Ugly Duckling Dinners. “It’s the introductory of the potential. We aren’t going too far into the inaccessible,” promises Gunawan.

At the end of the day, the most important thing for Royal Dinette is to spread the philosophy of cooking and eating more conscientiously. “If the message gets across, and people start to follow what we do,” says Gunawan, “at least we are creating a change.”

When: Tuesday, October 20 and Tuesday, November 24 at 6:30 p.m.
Where: 905 Dunsmuir Street
Cost: Tickets are available online, and include a five-course menu with beverage pairings for $79 per person, plus tax and gratuity.