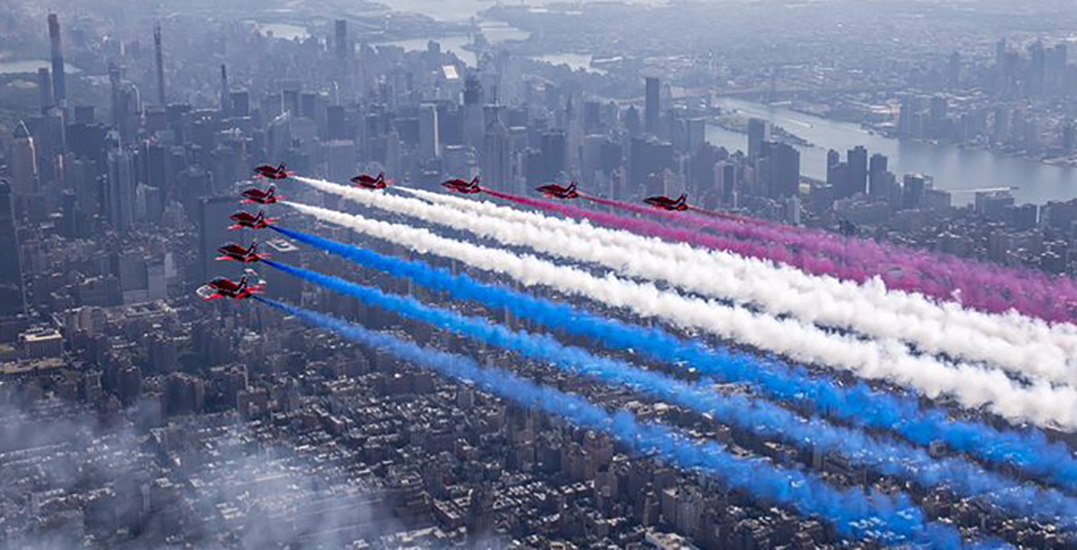 The Royal Air Force (RAF), the United Kingdom’s aerial warfare force, are amidst their largest-ever visit to North America and their first tour in more than a decade.

The 11-week deployment aims to show off the best of the United Kingdom and promote partnerships with friends and allies.

The tour, which is centred around the RAF Red Arrows Aerobic Team, includes visits to cities across North America, including Canadian stops in Vancouver, Victoria, Toronto, and Ottawa.

“With stops across the continent, the tour comprises of aerobatic displays, flypasts of well-known landmarks, and dozens of ground engagements,” reads the RAF website. “Each show is a demonstration of creativity, engineered excellence, and innovation.”

108 members of the RAF are taking part in the visit, including pilots, engineers, and support staff. In terms of vehicles, there are 12 Red Arrows Hawk aircrafts and one Atlas A400M RAF transport aircraft.

Prior to visiting North America, the Red Arrows were also flown to the airfields in Scotland, Iceland, and Greenland.

The Red Arrows will be in Vancouver on September 24 and 26. Tuesday, September 24 involves an installation at Science World, followed by a Q&A with Red Arrows pilots and engineers.

Thursday, September 26, will include a flypast by the Red Arrows, a photo booth, and activities at the Vancouver Harbour.

Exact times will be announced by the RAF closer to the date on social media.

Where: Science World at the TELUS World of Science and the Vancouver Harbour

Time: Times will be announced by the Red Arrows at a closer date.